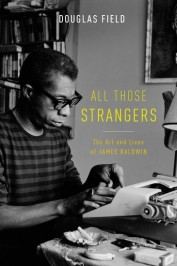 All Those Strangers: The Art and Lives of James Baldwin

As the fires burned in Baltimore, following the arrest and subsequent death of Freddie Gray in April 2015, protesters brandished placards with quotations from James Baldwin’s work, and thousands of blogs and Twitter feeds invoked the legendary writer. Although he is frequently compared to his contemporaries, Ralph Ellison and Richard Wright, it is Baldwin’s writing—forged in the crucible of the civil rights movement fifty years ago—which still speaks to and about the complexities of racial America with incomparable eloquence, insight, and moral rectitude.

Despite his insistence that he was a writer, not a civil rights leader, Baldwin’s publications, including The Fire Next Time, probed the labyrinthine moral complexities of “the white problem.” For many people in the 1960s, Baldwin was the voice of the civil rights movement. And yet he came under attack, not only from white liberals, but from young African American radicals such as Eldridge Cleaver, who dismissed the older writer, largely on account of his sexuality. In some circles Baldwin became known as “Martin Luther Queen.”

In the wake of rioting and civil unrest following Martin Luther King Jr.’s assassination in 1968, Baldwin was interviewed by Esquire. Baldwin, who spent his career dismantling classifications such as gay and straight, white and black, objected to the term “looters.” More pertinent, Baldwin probed, is the question of who is really looting whom, just as he would describe the US justice system as a vast “criminal power.” Artists, he insisted, must be “disturbers of the peace,” a skill he mastered through his long career, which included taking numerous pot-shots at J. Edgar Hoover, the FBI’s long-standing director. Hoover, Baldwin wrote, was “history’s most highly paid (and most utterly useless) voyeur,” a witty but prescient comment in light of contemporary government surveillance and global spying. Baldwin’s own FBI dossier ran to nearly two thousand pages.

Although he was often depicted as an angry writer, as Maya Angelo recalls, “Jimmy [Baldwin] was not bitter. What Jimmy was, was angry…He was angry at injustice, at ignorance, at exploitation, at stupidity, at vulgarity.” Far from bitter, Baldwin’s writing frequently confounds the reader with his insistence on love. In his most famous essay, The Fire Next Time, published in 1963 during a particularly bloody episode in the civil rights movement, Baldwin called upon “the relatively conscious whites and the relatively conscious blacks” to work together, not as neighbors or comrades, but as “lovers.”

As Jessica Moulite notes, social media activists and commentators find enduring relevance in the author’s work, illustrating “how Baldwin’s words transcend time by remaining as relevant in 2014 as they were in 1963.” In recent weeks, a debate has raged over social media between the activist and academic Cornel West and author Toni Morrison. The disagreement between West and Morrison surrounds the publication of a book by Ta-Nehisi Coates, Between the World and Me, a book heavily indebted to Baldwin’s The Fire Next Time. While Morrison claims that Coates fills the intellectual void left by Baldwin, West has objected vociferously to such a comparison, arguing that “Baldwin’s painful self-examination led to collective action and a focus on social movements. He reveled in the examples of Medgar, Martin, Malcolm, Fannie Lou Hamer, and Angela Davis,” which he compares to Coates’s “fear-driven self-absorption.” Since his death in 1987, Baldwin’s work continues to provoke, anger, comfort, and illuminate; his voice, to quote from his short story “Sonny’s Blues,” remains for many readers, activists and commentators, “the roar rising from the void.”

Douglas Field is Lecturer in Twentieth-Century American Literature at the University of Manchester. He is the author of All Those Strangers: The Art and Lives of James Baldwin, A Historical Guide to James Baldwin, and American Cold War Culture.