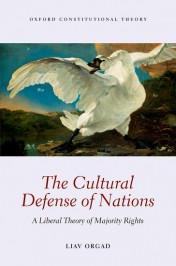 Surveys show that a high percentage of British citizens “feel British.” But what exactly do people have in mind when they say this? People may think differently about this question, and perhaps it is also British to give various meanings to British identity. Still, can we define what it is to “feel” British? Or even what is un-British—be it a pattern of behavior, a belief, or a way of doing things?

In 2002, the Home Office published a report on the essence of Britishness: “To be British seems to us to mean that we respect the laws, the elected parliamentary and democratic political structures, traditional values of mutual tolerance, respect for equal rights and mutual concern… to be British is to respect those over-arching specific institutions, values, beliefs and traditions that bind us all.” Three years later, in 2005, the Commission for Racial Equality offered its own version of what is uniquely Britishness. Britain, it found, is a constitutional monarchy, a parliamentary system, a white English-speaking country, and a democracy that cherishes freedom, the rule of law, fairness, and tolerance.

Until not so long ago, European countries did not struggle with the question “who are we,” or search for a bond to bind them together. National identity was a given, not something that had to be defined. But times have changed. The question of immigration, together with globalization processes and the rise of minority rights and multiculturalism, have led to a new reality where it becomes more difficult to know what it means to have a national identity, how legitimate it is to act upon such identities or impose them on newcomers. Immigration, more than anything else, has brought to the fore the question of national identity, encouraging nation-states to define themselves. As George Orwell rightly observed, “It is only when you meet someone of a different culture from yourself that you begin to realize what your own beliefs really are.”

National identities have traditionally not been legal concepts. Perhaps for the first time in human history, states currently offer, or attempt to offer, a legal definition of their collective identity. Immigration law is the field in which this fascinating phenomenon is taking place.

Search for an Identity

Nation-states all over the world are seeking to construct a unique national character to be shared and celebrated, and to find a distinguishing identity.

Take France, for example. In November 2009, President Sarkozy launched a nationwide discussion over the meaning of being French. “For you, what does it mean to be French?” he asked the public. The three-month public debate sparked a heated discussion, both over the wisdom of such a debate and over the essence of being French. Whether the campaign was a political ploy or a real exercise in nation-building, the attempt to summarize the essence of Frenchness was an interesting move. It shows that when nation-states start to examine what holds a people together, they quite often conclude that there are more sources of division than unity.

Questioning the qualities one should possess to become French is not just a philosophical, but also legal issue. The Conseil d’Etat, the highest French administrative court, has ruled that it is justified to deny citizenship if a candidate acts in a way that is incompatible with the “values essential to the French communauté.” The Court, however, did not offer guiding standards of what one should do, or avoid doing, in order to assimilate into the French way of life, nor did it provide a definition of “values essential to the French communauté.” Surely, if living together in France means knowing and respecting French values, it is better to know what they are.

Immigration law provides a unique platform to reflect on three issues: defining the “we,” setting criteria for identifying the desired “they,” and finding the core to which “they” should subscribe to become part of “us.” Naturalization requirements—the criteria that “they” must fulfill in order to join “us”—define “our” way of living, form of thinking, and mode of behavior. Citizenship tests, in particular, are an interesting way to learn about a society’s collective identities, aspirations, and hopes. They can help clarify who is, in the state’s view, a “good citizen,” and the current understanding of what it means to become a citizen in a liberal state.

In less than a decade, Britain has changed its concept of Britishness, as reflected in the test, three times!

Take Britain, for instance. Starting in 2005, every person asking to settle in the United Kingdom must demonstrate “sufficient knowledge about life in the United Kingdom” by passing the Life in the UK Test. In less than a decade, Britain has changed its concept of Britishness, as reflected in the test, three times! The first edition (2005) and the second edition (2007) of the official handbook of the Life in the UK Test did not focus on British history, and downgraded British identity to daily life issues. A person had to know what people do on Valentine’s Day (lovers exchange gifts and cards), what is the Grand National (an annual steeplechase), and how might you stop young people playing tricks on you on Halloween (give them sweets). For example, the applicant had to know how to buy a ticket for the Underground and that dogs in public places must wear a collar that shows the name and address of the owner.

In March 2013, Britain revised its national identity, as reflected in the Life in the UK Test and, for the first time, incorporated British history. To become British, one has to be familiar with Chaucer, Shakespeare, Lord Byron, Charles Dickens, Adam Smith, Isaac Newton, the Beatles, and British soap operas. The applicant has to find their way in a royal maze: John, Henry V, Henry VII, Elizabeth I, Charles I, and Henry VIII, not to mention a long list of Henry VIII’s wives – (and he had six!). The new handbook is like a renaissance of British identity. One of the most detailed parts of the handbook relates to sports. It contains a long list of notable British sportsmen and detailed explanations on cricket, rugby, and football. Even issues such as shopping, cooking, and gardening have become uniquely British. (“The countries that make up the UK all have flowers which are particularly associated with them.”) The British also have a unique cuisine, theater, and comedy. They are also cool and modern. They use Facebook and Twitter and go out to pubs and night-clubs, and like to gamble, especially on sports.

In drafting a citizenship test, we tell a story about ourselves and our country. What are the elements of a national story? Three elements exist. The first part of a story includes facts, attributes of who “we” actually are. The second part of the story includes “imagined” facts, attributes that “we” ideally hope to possess. This part includes romantic conceptions of ourselves, representing a romantic ideal of ‘the good old days’. This is a blend of fiction and non-fiction of the contemporary “we.” The third part of the story includes “ought-to-be facts,” attributes that are not the best description of the “we” but, rather, the attributes that “we” want other people to think that “we” possess. This part includes those details aimed at deterring certain people and encouraging others.

Think of online dating sites as an analogy. Persons who subscribe to the service go through a process of defining their “self.” A person should specify physical information (hair color, height, weight), personal details (education, occupation, date of birth), and lifestyle (smoking, drinking, willingness to relocate). While these details are factual, similar to details about demography or geography, other details are more complex: “my life ambitions are…”, “my personality is best described as…”, “the things I could never live without are…”, “for fun, I like to…”. Studies show that persons who subscribe to online dating websites define their identity by referring to three aspects of their self. The first is the actual self. People write factual details about their weight and height. The second is the ideal self. People write details that they believe to be factual. A person can describe his “body style” as muscular and athletic, even though his real body is plump and flabby. A person may choose a wrong description of his self not because he lies, but because he indeed believes that he has an athletic body style; this is an imagined “self.” The third is the ought-to-be self. People write details that are fiction since they want others to believe that they possess certain attributes. For instance, a woman may say that she likes classical music, even though she really likes techno music, because she believes that classical music will further impress her targeted audience.

Liberal states don’t ask immigrants to be “like us,” but better than us. Citizenship tests don’t focus on what British actually are, but on what they think they are (the ideal self). By means of immigration laws, states develop an imagined story of a culturally homogenous group that speaks the same language, shares the same values, and celebrates the same holidays—as if all people are the same. They offer a fictional description of who they are by romanticizing who they were or want to be. Then, they ask to impose part of this prescription on immigrants in order to promote cohesion and unity.

What can immigration policy teach us about national identity? On one hand, some National identity debates end up with seemingly trivial issues, items of popular culture like movies, carnivals, and sports. This “Disneyfication of cultural difference,” as termed by Will Kymlicka, may be the greatest indicator of a national identity crisis. Political leaders in the West declare the death of multiculturalism and seek to focus on “our” culture, yet cannot pinpoint exactly what this culture is. In a sense, they find out that the shared culture is, at best, a particular version of political liberalism.

On the other hand, some national identity debates end up with “high culture”—Rembrandt, Molière, Nietzsche, or Shakespeare. As a large percentage of the public is not well-versed in this information, this looks like an attempt to romanticize collective identity. It may be more what we think we are (ideal self), or want other people to think we are (ought-to-be self), than who we are (actual self).

Talking about the national identities in an age of globalization may seem a bit old fashioned. Trans-cultural diffusion is greater today than in any other period in human history. In the contemporary world, ideas come and go— through free markets, international media, and the Internet—and the notion of cultural exceptionalism faces multiple challenges. The “other” is present in national boundaries not just physically but spiritually. Cultures change, and they will continue to change more rapidly than ever. Even if states can control the flow of people, they can hardly control the flow of cultures. It is too early to predict whether we are witnessing the “swan song” of the old structure of national identity, or its transformation.

Liav Orgad is Assistant Professor of Law at Interdisciplinary Center (IDC) Herzliya, Israel, a Marie Curie Fellow at Freie Universität Berlin, and a Fellow-in-Residence at the Edmond J. Safra Center for Ethics, Harvard University. His book, The Cultural Defense of Nations: A Liberal Theory of Majority Rights, will be published next month by Oxford University Press.