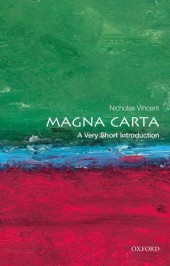 This year marks the 800th anniversary of one of the most famous documents in history, Magna Carta. The charter was agreed upon by King John at Runnymede, and has since become a symbol of liberty. Nicholas Vincent, author of Magna Carta: A Very Short Introduction, tells us 10 things everyone should know about Magna Carta:

Nicholas Vincent is Professor of Medieval History at the University of East Anglia and has also held posts at Cambridge and Canterbury. He divides his time between his work in England and his family in France and he is the author of Magna Carta: A Very Short Introduction.