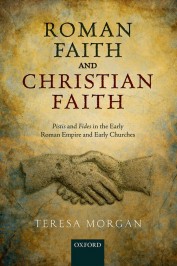 As another summer is overcast by reports of religious conflicts and atrocities around the world, I have been thinking about faith, and how the way we understand it affects our response to some of the global challenges we face.

If you were brought up in the western world, you probably think of faith (if at all) in one of two ways. It is the profound, supra-rational conviction or intuition in a believer’s heart and mind which reaches out towards a mysterious divine. Or it is a set of beliefs and practices which people of faith hold are true and right, but about which they often disagree, argue, and even fight.

Both these ideas go back to Augustine of Hippo in the 5th century CE. In his treatise On The Trinity, Augustine described faith as having two aspects: fides quae, the faith which believers believe (that is, the body of Christian doctrine), and fides qua, the faith by which they believe (that which takes place in the heart and mind of a believer). His account has had a huge impact on western Christianity and on western thought in general.

In the 21st century, is it time to reconsider how we understand faith, not only for historical or religious reasons but for contemporary political ones?

Augustine’s description of fides was idiosyncratic even in his own day. It would probably have surprised earlier Christians greatly. The core meanings of fides and its Greek equivalent pistis are ‘trust’, ‘trustworthiness’ and ‘faithfulness’ (followed by a wide range of more specialized senses). The authors of the New Testament wrote about the pistis between God, Christ, and those who followed Christ, understood it not primarily as an interior state nor as a body of doctrine, but as a relationship of faithfulness and trust into which ‘the faithful’ entered because they had seen or heard about the love of God and the life, death, and resurrection of Jesus Christ.

Pistis was so central to early Christians’ understanding of their relationship with God that within a couple of generations they were regularly referring to ‘the faith’. This was another term for the new covenant between God and humanity, sealed by the saving self-sacrifice of Christ.

There was nothing intrinsically mysterious about the faith. The phrase ‘the mystery of faith’, which also appears in the New Testament and deeply influenced later Christian thinking, was not intended to mean that pistis was a mystery to community members. It likened the worship of Christ to the Mystery cults which were popular at the time throughout the eastern Mediterranean. What made a cult a Mystery was that only the initiated knew what took place during its main rituals. This was also true of early Christian worship, where only the baptized were allowed to take part in the Eucharist.

All societies and cultures, however, evolve, including religious ones, and Augustine’s definition of faith has dominated western thinking for fifteen centuries. Does it matter now what earlier Christians understood by pistis? I think it does.

For the world’s 2.2 billion Christians, hearing, studying, and learning from the New Testament is still fundamental and formative. Understanding what the people who lived closest in time to Jesus Christ were trying to say when they used pistis language about him and their relationship with him therefore has significant implications for Christians’ understanding of their faith today.

But it matters just as much to everyone else.

In the modern, English-speaking world, we refer to all religious traditions as ‘faiths’. In doing so, we unconsciously impose Augustine’s model on them. We allow ourselves to assume that all religions are intrinsically mysterious; that they always involve supra- rational (or irrational) movements of the mind or heart; that they are based on bodies of doctrine which may at any time be argued or fought over.

We may still be familiar enough with Christianity not (usually) to find this view of it alarming. But when we apply the model to traditions most westerners know less about, we risk creating bogeymen and arousing unnecessary fears. An unfamiliar tradition based on mystery sounds suspicious. One that privileges the non-rational sounds archaic and difficult to negotiate with. One which makes dogmatic truth claims and is willing to fight about them sounds threatening.

“Understanding religious traditions in practitioners’ terms, of course, will not solve the many political and military crises around the world that are tangled up with religion. But it may be part of the solution.”

Religious traditions understand themselves in many different ways, and, in many, faith in either of Augustine’s senses plays little or no part. (Wisdom, for instance, may be more important than belief, orthopraxy than orthodoxy; the focus may be on this world rather than another or on liberation from self-centredness rather than the service of a divinity.) To understand unfamiliar religious traditions and how they inform practitoners private, public, and political lives we need to understand how practitioners themselves understand their tradition.

Understanding religious traditions in practitioners’ own terms, of course, will not solve the many political and military crises around the world in which religion is entangled. But it may be part of the solution.

It is a bad start to involvement in any conflict to assume that the participants or the issues at stake are mysterious, irrational, or driven by dogma. It is more respectful and more productive to seek to understand the issues in participants’ own terms and engage with them on that basis.

Understanding the issues in such terms helps those engaged in conflict resolution to recognize whether religious issues are more or less central to a conflict, and when they are central, how and why, and how they relate to the other issues at stake. Understanding that, creates a basis for better focused and more nuanced negotiations and peace processes. It often also highlights that any religious tradition encompasses different ways of thinking and behaving, many of which do not foster conflict or actively discourage it. There is nothing mysterious, irrational, dogmatic, aggressive, or dangerous to the world about religion per se.

Augustine of Hippo was a great Christian theologian. But in the 21st century, we should be looking both behind his understanding of faith and beyond it. By doing so we can hope to reach a better understanding both of Christianity and of other religious traditions, of religion in general, of the role of religion in global conflicts, and of how we may best seek to resolve such conflicts.

Featured image credit: ‘Candles in a church in Prague’ (cropped) by Dudva, CC BY 3.0 via Wikimedia Commons.

Teresa Morgan is Professor of Graeco-Roman History in the Faculty of Classics, Oxford University, and Nancy Bissell Turpin Fellow and Tutor in Ancient History at Oriel College. She is a historian of Graeco-Roman and early Christian culture and mentalité; previous books include Literate Education in the Hellenistic and Roman Worlds (1998), and Popular Morality in the Early Roman Empire (2007). Her latest book is Roman Faith and Christian Faith (OUP, 2015). She is a self-supporting priest in the Parish of Littlemore, Oxford.