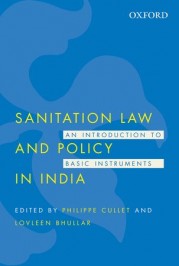 Sanitation Law and Policy in India: An Introduction to Basic Instruments

Sanitation has evinced considerable interest from policy-makers, lawmakers, researchers and even politicians in recent years. Its transformation from a social taboo into a topic of general conversation is evident from the fact that one of the central themes of a recent mainstream Bollywood production (Piku, 2015) was the inability of the protagonist’s father to relieve himself. While these are welcome developments, the need to urgently address the plethora of sanitation-related issues in India is undisputed. Inappropriate sanitation remains a major cause of water-borne diseases that adversely affect a significant percentage of the population. As a leading cause of water pollution, sanitation is also a key element of any discussion on environmental quality, given the centrality of water to environmental policy debates.

On the positive side, the recent astronomical increase in the visibility of sanitation on different platforms has resulted in sanitation becoming the first key policy initiative of the new government elected at the Union level in 2014. The over-arching Swachh Bharat Mission (SBM) adds new dimensions to the sanitation debate and updates certain components of the existing policy framework, as in the case of rural areas. The launch of the SBM, and the enactment of a law prohibiting the abhorrent practice of manual scavenging in 2013 confirm the role of law and policy in addressing the various sanitation-related issues. This is not news to people who have been working in the field but it highlights the importance of legal and policy instruments.

However, there is still little or no clarity concerning the appropriate level and extent of intersection between sanitation and law and policy frameworks. Sanitation has often been and still is reduced to ‘toilets’ and ‘defecation’. This is accompanied by a limited understanding of what the achievement of an ‘open defecation free’ status entails. While these are central concerns, there are other equally important issues that fall outside the mainstream ‘toilet’ paradigm but require immediate attention if the sanitation crisis in India is to be addressed in a holistic manner.

The limited focus of the mainstream sanitation framework is one of the reasons why the law and policy frameworks concerning sanitation appear relatively limited when they are, in fact, very broad. In general terms, such frameworks seek to include (to varying extent):

The piecemeal nature of the existing legal instruments and policy documents need not be a hindrance to resolving the sanitation crisis. If we tackle the knowledge deficit and bring together the various legal and policy dimensions of the issue, we can better ensure environmental quality and public health for everyone.

Featured Image: “Ganges river at Varanasi in India 2008” by JM Suarez. CC BY 2.0 via Wikimedia Commons

Philippe Cullet and Lovleen Bhullar are the authors of Sanitation Law and Policy in India: An Introduction to Basic Instruments. Philippe Cullet is Professor of International and Environmental Law at SOAS, University of London and a Senior Visiting Fellow at the Centre for Policy Research, New Delhi. Lovleen Bhullar is an Independent Researcher associated with the Environmental Law Research Society (ELRS), a non-governmental organization working on environmental law and policy issues in New Delhi, India.

How much do you know about opioids? [quiz]