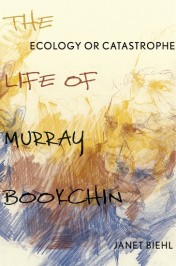 Ecology or Catastrophe: The Life of Murray Bookchin

Everyone knows that in June 1962, Rachel Carson published a series of articles that became Silent Spring, the eloquent book that launched the American environmental movement. But far fewer know that in the same month a second American author also raised the alarm about the threats posed not only by the growing use of chemicals, but also by a wide range of environmental ills emerging in those years.

Industrialized agriculture, with its broad use of chemicals, constituted a threat to human health, argued Murray Bookchin (1921-2006) in his first book, Our Synthetic Environment (published by Knopf in June 1962, under the pseudonym Lewis Herber). Crops grown in monocultures were vulnerable to infestations, requiring pesticides; and pesticides like DDT were linked to degenerative diseases, even cancer. Meanwhile cities too were becoming toxic. Pollution was choking the air and waterways. City dwellers, toiling in a deadening monoculture of uniform glass-towered offices, were subject to high levels of stress, deprived of fresh air and sunlight, their walkable streets displaced by the soot-spewing automobile. And finally, nuclear power posed the unprecedented threat of radiation.

Our Synthetic Environment not only warned about these problems; it indicted the social and economic system that generated them. One reviewer, William Vogt, noted that Bookchin “ranges far more widely than Miss Carson and discusses not only herbicides and insecticides, but also nutrition, chemical fertilizers […] soil structure.” The British periodical Mother Earth called Our Synthetic Environment “one of the most important books issued since the war and I thoroughly recommend it to all who are interested in the way we live.” The eminent microbiologist René Dubos lauded both Our Synthetic Environment and Silent Spring for alerting the public “to the dangers inherent in the thousands of new chemicals that technological civilization brings into our daily life.”

Why was the book mostly overlooked? One reason was surely the fact that its author was a political radical, a former Communist turned anarchist, whose natural métier was broad social analysis. As the culture critic Theodore Roszak speculated a decade or so later, “the staggering breadth and ethical challenge of Bookchin’s analysis” was overwhelming: “Nobody, as of 1962, cared to believe the problem was so vast. Even the environmentalists preferred the liberal but narrowly focused Carson to the radical Bookchin.” Moreover the remedy Bookchin offered was social revolution, and as the environmental writer Stephanie Mills noted a decade or so later, that was “too much for people to swallow in ’62.”

Unfazed, Bookchin went on in his next book to wrestle with an even larger problem. Crisis in Our Cities, published in 1965 (also under the Lewis Herber pseudonym), was mostly a study of urban ills. But in the closing chapter, he explained that “man’s increased burning of coal and oil is annually adding 600 million tons of carbon dioxide to the air. […] This blanket of carbon dioxide tends to raise the earth’s atmosphere by intercepting heat waves going from the earth into outer space.” Now, Bookchin wasn’t a climate scientist—his information source was a brief article in a scientific journal. But the consequences were clear: rising temperatures that would disrupt the climate: “Meteorologists believe that the immediate effect of increased heat leads to violent air circulation and increasingly destructive storms.” Bookchin took a daring leap to suggest that “theoretically, after several centuries of fossil-fuel combustion, the increased heat of the atmosphere could even melt the polar ice caps of the earth and lead to the inundation of the continents with sea water.”

Bookchin correctly diagnosed the cause of the looming problem: the burning of fossil fuels. Indeed, “we could not hope to sustain our fossil-fuel technology indefinitely even if there were ample reserves of coal and oil for millennia to come.” So the agenda, he said (still in the 1965 book), must be to shift to alternative sources of energy. “Every day, the sun provides heat energy to each acre of the earth’s middle latitudes in amounts that would be released by the combustion of nearly three tons of coal,” he observed. “If we could fully utilize the solar energy that annually reaches the continental United States, we would acquire the power locked in 1,900 billion tons of bituminous coal!” But unlike coal, energy derived from the sun would be “clean and inexhaustible.”

Wind power would be another clean source: we could “harness the winds for producing electric power at costs that are competitive with fossil fuels.” And finally we could use energy from tides: “sea water will be trapped behind the dam as the tide rises and will then be rereleased as needed into generating turbines.” From these disparate sources, Bookchin suggested piecing together a system “in which the energy load is distributed as broadly as possible.”

He dared to say in the mid-1960s what many today are acknowledging: that the root cause of climate change is capitalism, a system that compels firms to lay waste our common home in order to survive. The incipient greenhouse effect “is symbolic of the long-range catastrophic effects of our irrational civilization on the balance of nature.” To preserve the viability of the biosphere, he argued, we must rethink our economic system and create a “moral economy,” one that places the common good ahead of the unshackled profit motive, within the boundaries of the natural world.

For the rest of the twentieth century, he would profound his visions of a decentralized, humane, cooperative ecological society: in the 1960s to the New Left; in the 1970s to the antinuclear movement; in the 1980s to the Green movement; and in the 1990s to radicals dislocated by the fall of the Soviet Union. He was a genuine original, a prescient thinker who worked out solutions to problems before most people realized they existed. His message has only become more relevant today.

Janet Biehl was Murray Bookchin's copyeditor for the last two decades of his professional life, and collaborated with him on both books and articles. She works as a freelance copyeditor for Viking Penguin, Alfred A. Knopf, Pantheon, Crown, Doubleday, and many other publishing houses. She is also the author of Ecology or Catastrophe: The Life of Murray Bookchin.