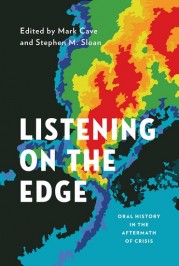 Listening on the Edge: Oral History in the Aftermath of Crisis

Ten years have passed since Hurricane Katrina. New Orleans is in the midst of celebrating a remarkable renewal. I still live in the same apartment that I lived in before the storm. It looks the same, perhaps a bit more cluttered, but the neighborhood has certainly changed. A yoga studio opened up across the street, for which I’m delighted. A handful of art galleries, a new “tapas” place, and a store that sells only swanky reading glasses, have all opened up. It was not necessarily a bad neighborhood before the storm, at least by New Orleans standards, but it has never been as fancy as it is today, and this can be said of much of post-Katrina New Orleans.

Personally, I like it; unlike many people, my rent has not gone up too much and I like living in a posh neighborhood. But it somehow feels false, as if a beautiful new façade has been pasted over the city’s wounds. Dark memories and unresolved questions from the aftermath of Katrina still seem to haunt the present.

My own experience of Katrina was largely vicarious. My cat and I hitched a ride with a friend the day before the storm and headed north. I ended up spending a month with my sister in Kentucky. I did not have much to deal with when I got back; the apartment was fine, and I had a job. In my role as oral historian for The Historic New Orleans Collection, however, I spent the next four years interviewing over five hundred first responders about their experience during the immediate aftermath of the storm. They were involved in dramatic episodes throughout the area, many of which were unreported during the media blitz that followed the storm. Their memories still cling to my own perceptions of almost every neighborhood in the city.

On my way to work each day, I pass under the elevated expressway that skirts the city’s central business district. I remember stories told to me by prison guards who were involved in the evacuation of the parish prison. They discovered a body of a man, who witnesses said had been thrown off the overpass. The guards covered the body and went back to the unfolding crisis within the prison. To my knowledge, this murder was never investigated. A number of years ago, someone had donated to our museum a grisly image of a body under the overpass. Could it be the same man?

Each time I claim my luggage at the Louis Armstrong International Airport, I can’t help but imagine sick and elderly people laid out like baggage on the luggage carousel, which I learned about from members of a medical team working at the airport. They retreated to the airport after they were forced to abandon a makeshift clinic at the New Orleans Arena that was set up to help those who sought refuge at the Superdome. Several of their doctors were physically attacked when the environment around the Dome began to fall apart.

I go to the Arena a few times a year to watch basketball and every time, I remember a powerful narrative given to me by the medical team’s chaplain. His job was to man what they called the “expectant” area: a place for those who were beyond the capabilities of the team to help, and who were “expected” to die. The chaplain prayed with them, held their hands. When asked how many died, he passionately rebuked the generally-accepted claims that only six people died at the Superdome/Arena area; he claimed to have “eyeball knowledge” of many more deaths. His claims were backed up by some of his team members, but to my knowledge there is still no definitive body count.

Soon after I returned to the city following Katrina, I rode my bike down St. Claude Avenue to the bridge over the industrial canal that separates the Upper and Lower Ninth Wards. The whole city was a mess, only a few neighborhoods had been reopened, and most businesses were still closed. This area, however, seemed particularly post-apocalyptic. A shell of a burned-out city bus lay on the median of the street, windows of nearby buildings had been smashed out. It looked like a riot had taken place.

A few years later I did a series of interviews with wildlife agents who participated in boat rescue operations in the area right after the storm, including Captain Stephen McManus and Sergeant James Hagan of the Louisiana Department of Wildlife and Fisheries.  They saved hundreds of people from rooftops in the Lower Ninth Ward and dropped them off on the St. Claude Avenue Bridge. Once there, they had no place to go, and the crowd became increasingly agitated. According to one of the agents the situation erupted when the crowd overheard an argument he had with another agent over what to do with the body of an elderly woman who had died. As angry civilians pounded on the sides of their vehicles, the agents abandoned the scene as the situation escalated. What happened after they left?

Not far from where this all happened, the Saint Roch Market opened this past April with great fanfare. The mayor and other city leaders gave uplifting speeches about the city’s recovery. Proud new vendors presented their wares ranging from sweet and savory crepes to fancy cocktails and cold pressed juices. The market was the crowning jewel of gentrification in that part of the city. A few weeks later it was trashed. A dozen windows were smashed; paint was splattered on the walls along with hateful graffiti.

There is an undercurrent of disenchantment in New Orleans that’s deeper than anger over higher rents and the loss of familiar things. An unspoken contract between people and their community was broken by Katrina. For some, the sense that the city is safe from the sea is gone; there is no real trust that our leaders can prevent the community from slipping once again into chaos; nor is there faith that the truth of events will ultimately be known and justice done. These ghosts of Katrina linger, impacting life in subtle, often uncomfortable ways. It may take a generation to convince some that this recovery is something real and lasting. For them, the city’s renewal may just look like a fresh paint job on an old rickety haunted house.

Image Credit: “A flooded St. Louis Cemetery No. 2 in New Orleans in the shadow of the Iberville Housing Project and the skyline of the Central Business District” by Chris Mickal. Courtesy of The Historic New Orleans Collection.

Mark Cave is senior curator and oral historian at The Historic New Orleans Collection. He has shaped oral history responses in the aftermath of Hurricane Katrina and the Deepwater Horizon Oil Spill in Louisiana. He is co-editor with Stephen M. Sloan of Listening on the Edge: Oral History in the Aftermath of Crisis.

Listen now before we choose to forget

Why hurricanes are deadly for older people