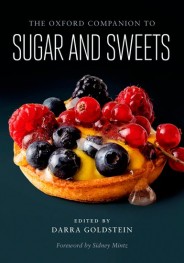 Through time, we use, reuse, and recycle words to our liking and even make up completely new words, much to some people’s chagrin. Even words about sweetness—sugar, honey, sweetie—aren’t exempt; in a number of cases, they have been re-spun and re-purposed to fit the uses of everyday communication. In the following excerpt, Jonathon Green, an expert lexicographer and contributor to The Oxford Companion to Sugar and Sweets, gives us the rundown of the sweet terms and phrases that have been re-imagined and incorporated into slang.

Slang—mocking, sneering, casting a jaundiced eye on the world’s proprieties—is by its nature sour. It finds approval hard, congratulation challenging, and affection almost impossible. Yet even if slang’s oldest meaning of “sugar” is money, and the second oldest a euphemism for the most common term for defecation, slang, for all its skepticism, cannot resist the tempting possibilities of “sweet.” It has no word for “love,” but someone can “be sweet on” someone else, and the trope “good enough to eat” characterizes a wide range of human love-objects. But slang has its limits. The presence of sweetness—whether the term itself; semantic equivalents such as “honey” or “sugar”; specifics such as “cake,” “toffee,” “candy,” or “lollipop”; or a variety of brand names such as M&M’s (drugs in pill form)—is regularly turned on its head in a wide range of negative definitions. In slang’s upside-down, inside-out, tweaked, and twisted world, even sweet can turn sour.

Let us begin, then, with “sweet” itself.

Judged by slang’s mainly concrete lexis, the word “sweet” manages quite a few abstractions. There is the ironic sweet: a “sweet mess,” “take your own sweet time”; there is the approving sweet, applicable to people, objects, actions, and events. There is sweet in human terms, which can mean gullible, but also dexterous and expert; in criminal terms, it can mean devoid of suspicion, as well as simple and lucrative (when describing a crime as safe). To “be sweet” is to be amenable; this usually occurs as “keep/have someone sweet”—to keep someone well disposed toward oneself, especially by complaisance or bribery. Given the traditional equation of little girls with “sugar and spice,” it can also imply effeminacy when used of a male, thus yielding compounds such as “sweet kid,” “sweet girl,” or “sweetmeat”—prison terminology for a younger prisoner who joins up with an older man. (Sweet, when referring to real females is, of course, standard.) As noted earlier, to be “sweet on” is to be in love with or infatuated by, though it can also mean nagging, pestering and insistent, free of relationships, and simply satisfied or happy. Australia’s “she’s sweet” or “she’ll be sweet” means everything is satisfactory, as does “she’s be apples” or “she’ll be apples.” That which is easy or pleasurable can be “sweet as a nut,” “sweet as honey,” or “sweet as a lolly.”

Sweet can act as an intensifier: “sweet (bleeding) Jesus!”, “sweet Christ!”, and others. It can refer to the beloved, the “sweet papa” or “sweet mama” (though the inference is of financial transaction and the primary synonym remains “sugar daddy”); thus it can also modify the world of commercial sex, giving the “sweet mack” or “Sweet Willie,” a (relatively) gentle pander. The pimp is also a “sweetman,” although the word can cover a less compromised lover—what makes him sweet are the gifts he brings, and perhaps his “sweet-mouth” (his verbal skills).

In standard usage, to “sweeten” is to adulterate with sugar; its slang definitions include to bribe, to flatter, or to mollify (typically a con man’s anxious victim). The trickster is the “sweetener,” a term that can also mean a bribe; a word of encouragement, or a threat of force; the lips; and, slang’s male viewpoint aforethought, the penis. Sometimes sweet can be taken literally, as in the short-order jargon’s “blonde and sweet” (coffee with cream and sugar). “Sweetness and light” meaning whiskey, suggests a positive image of the liquor’s effects (not exactly what Matthew Arnold was thinking of in Culture and Anarchy).

“Sugar” picks up on the monetary associations of “sweeten,” to mean a bonus or a bribe, and the verb form means to bribe or to present a fake image. A “sugar-bag” accepts such gifts, though the second-rate materials used for such containers have led to the meaning “second-rate” for the word’s adjectival form. Inferiority also accompanies the compound “tea-and-sugar,” usually joined to a bandit or burglar, both petty thieves. It is also—though here the link is only assonant—a euphemism for “shit” (either as excrement or used as an exclamation), though, like shit, sugar can also mean money. The terms “big sugar” and “heavy sugar” refer to substantial sums of money, while a “heavy sugar daddy” or “heavy sugar papa” is a woman’s generous or exploitable older lover. Men turn the tables with “sugar basin,” the vagina, into which they deposit “sugar,” or semen. The “sugar-bush” is the pubic hair, and the  “sugarstick,” inevitably, the penis. The nineteenth-century exclamation “sugar, cock your legs and cry” signifies triumph or delight among members of the underworld and is accompanied by standing on one leg, cocking up the other, and shouting “Sugar!” Perhaps it equates with modernity’s approving “sweet!”

Like sugar, the term “candy” is far more common in the United States than elsewhere. The word can mean something admirable or desirable. It can refer to money or someone seen as “sweet,” with or without sexual overtones. And, like sugar, candy can codify the names of a variety of drugs, usually narcotic. An underlying image of “softness” that parallels “sweet” can suggest effeminacy, even homosexuality, and a “candy-ass” is a weakling, though in the 1920s and 1930s, “candy-leg” suggested a wealthy and attractive young man—an early form of “chick magnet.” Candy’s best known combination is “arm candy,” a pretty girl adorning the sugar daddy’s arm, but it also provides the synonymous “eye candy” and “brain candy,” meaning superficially attractive but intellectually undemanding.

Jonathon Green is a lexicographer and author of Green's Dictionary of Slang and The Vulgar Tongue.

Darra Goldstein is the Willcox and Harriet Adsit Professor of Russian at Williams College, having earned her Ph.D. in Slavic Languages and Literatures from Stanford University. She combines her love of literature with a passion for food studies, a field she helped pioneer by founding Gastronomica: The Journal of Food and Culture, which has been called a culinary New Yorker for its incorporation of photography, poetry, and art alongside thoughtful articles on all aspects of the foods we eat. She is editor-in-chief of The Oxford Companion to Sugar and Sweets.