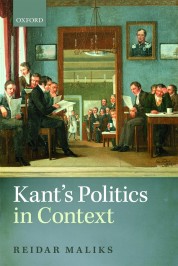 The French celebrate their National Day each year on July 14 by remembering the storming of the Bastille, the hated symbol of the old regime. According to the standard narrative, the united people took the law in its own hands and gave birth to modern France in a heroic revolution. But in the view of Immanuel Kant (1724-1804), the famous German philosopher, there was no real revolution, understood as an unlawful and violent toppling of the old regime. Writing in the wake of the events, he concluded that the King, by a “very serious error in judgment” had unintentionally abdicated and left the power to the people. Was it a revolution, or not?

Kant’s view has often been derided as a sneaky way to justify the revolution without being seen in public as doing so. Defending the revolution publicly could attract the King’s ire. The Prussian king, like all Europe’s sovereigns, feared the advancement of the revolution, and endorsements by opinion leaders might hasten that outcome. Kant, who was a professor at Königsberg, was Germany’s premier philosopher. He had many followers and defended a highly idealistic moral theory with clear affinities to the ideals of liberty, equality, and fraternity. Thus, fear of censorship could have been Kant’s reason for misrepresenting the event as something else than a revolution.

But perhaps Kant’s interpretation was quite sincere? If we explore Kant’s politics in context the first thing to notice is the scope of his argument: it was about the events of 1789, not the various (and bloody) transformations of the next decade. Moreover, the events he had in mind resembled a fairly orderly democratic transition. King Louis XVI was facing a disastrous debt crisis and his juridical institutions were recalcitrant to establish new taxes to make up for the debt. To solve the situation, the absolute monarch invited all male taxpayers over 25 years of age to elect deputies to a representative assembly (called the Estates-General), which was to deliberate about solutions to the debt and on how to improve the state’s wellbeing in general. This proto-democratic assembly met at Versailles on May 5, 1789. The assembly was rigged to give veto power to the nobility and the clergy – the defenders of the old regime – but on the initiative of the commoners the assembly soon jettisoned that restriction. Asserting its sovereignty, the assembly started preparations for a new constitution enshrining the values of liberté, égalité, and fraternité.

This is usually thought of as a revolutionary act, since the King had not intended to relinquish his absolute power. He had just asked for advice on how to run the country. But according to Kant, the King’s intentions were of no consequence. Once he had committed the error of setting up a representative organ he was no longer the sovereign ruler. Absolutism relied on the notion of the monarch as the sole representative of the people (which otherwise would be a disorderly multitude). Once the monarch abandoned that task he could no longer claim to be the ruler, and his sovereignty automatically “passed to the people”.

Kant’s view was not so exotic at the time. Edmund Burke (1729-1797) too thought the King had abandoned absolute sovereignty, something that pleased the conservative publicist, who was sceptical to absolute power whether in the hands of the king or the people. But Burke and Kant disagreed on what came in its stead. Burke concluded that power reverted to the ancient constitution of the feudal society that existed prior to royal absolutism. That society had dispersed power among the church, the nobility, the commoners, and the king. Kant, however, did not consider government of such mixed nature to be a real government at all, but just a collection of groups and persons pursuing their private interests.

Moreover, the representative assembly Louis XVI had convoked was elected by the people (or at least the propertied males) and was to represent not just special groups but also the nation as a whole. This was perfectly in line with Kant’s view of popular sovereignty as the ultimate source of justice in any government. He shared this view with Emmanuel-Joseph Sieyès (1748-1836), who was not just the most influential French popular leader but also an admirer of Kant. Like Sieyès, Kant did not hate monarchy. He simply considered that once the popular assembly had been set up, the King was reduced to a constitutional monarch, with no right to reverse the process. The popular uprising that followed in the summer of 1789 and that culminated with the storming of the Bastille was not a revolution since sovereignty was already with the people. It was just the result of popular fears that the monarch would claw back the power he had abandoned.

If Kant was right, we should revise the standard narrative of the foundation of modern France. It was not a violent revolution by the courageous masses, but a democratic transition set in motion by the king himself. And perhaps France should celebrate its National Day on May 5.

Reidar Maliks is Associate Professor of Philosophy at the University of Oslo. His articles have appeared in journals including Kantian Review and History of Political Thought. He is also the author of  Kant's Politics in Context (Oxford University Press, 2014).