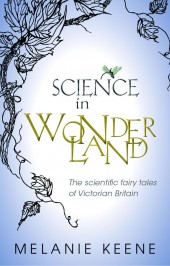 Science in Wonderland: The scientific fairy tales of Victorian Britain

Tomorrow Oxford will celebrate Alice’s Day, with mass lobster quadrilles, artwork and performances, croquet, talks, and teapot cocktails, and exhibitions of photographic and scientific equipment. The diverse ways in which Alice and her Wonderland are remembered and recast reveal how both heroine and story continue to speak to many different kinds of audiences, 150 years since Lewis Carroll’s book was first published. The 2015 events are just the latest in a series of commemorations: over the decades Alice’s Adventures have proved ripe for reinterpretation and reworking. Especially, it seems, by members of the scientific community.

Indeed, one text, Alice in Electronland, published in July 1943 by American Scientist, purported to be a hitherto unknown ‘original manuscript of Lewis Carroll’. From ‘curiouser and curiouser’ changes in scale, to philosophical conversations with ‘strange creatures’, and even a revamped Walrus and Carpenter who bemoaned the current state of academic research funding, Alice in Electronland took familiar elements of Carroll’s writings and reworked them with a scientific slant. As in the original book, novel perspectives on everyday habits and objects were encouraged; and well-known rhymes just seemed to come out differently:

“The time has come,’ the Walrus said, ‘to talk of applications,

The uses of the microscope in our investigations,

To take a peek at things that were our former speculations.”

The article, it transpired, originated from Stanford University, and rather than being an undiscovered Dodgson dossier, was rather a sophomoric caper by electron microscopists. In its amusing juxtaposition of a playful narrative form with calls for university reform, as well as scientific content, the text paid tribute not only to Alice, but also to ways in which her author combined sense and nonsense, logic and play, imagination and inventiveness, in his range of other publications on anything from Euclidean drama to the new Christ Church belfry.

Students on the other side of the Atlantic had also looked back to Alice when making sense of their scientific work: Alice down the microscope in the Cambridge student magazine Brighter Biochemistry. As in Wonderland, the protagonist embarked on a journey into another world where its protagonist encountered novel organisms, engaged in dances, and was even put on trial. The short journalistic tale from 1927 was presented as a vision that Alice experienced after availing herself perhaps too liberally of the ‘audit ale’ at lunch at her Cambridge college. Bored with ‘looking down the microscope trying to see all the things her Professor had told her she ought to see’, and finding only ‘vaseline and air bubbles’ rather than ‘motile bacteria’, Alice expressed doubt they were ‘there at all’, and wished she ‘could go down and see’. Her wish was granted, and ‘she found her way through the various lenses of her microscope’ and grew ‘very small (3 x 1.5µ)’.

Adopting the tone of a Victorian professor, reminiscent of Carroll himself, the narrator mixed both technical detail and avuncular hectoring to describe the microscopic realm. Just as in the original story, Alice encounters an inhabitant of the strange world she found herself transported into, only rather than dodos and caterpillars this time it was ‘a sausage-shaped person somewhat larger than herself, whose whip-like tail was still twisted round her legs’. This ‘person’ introduced himself as ‘Bac. Pyocyaneus’, or ‘“Pyo” to real friends’. An illustration paying homage to John Tenniel’s famous depiction showed Alice and a hat-wielding Pyo together, as he proceeded to take her on a tour of the environs. This served to satirize the educational institutions themselves, for instance, when the duo found themselves in ‘a large lecture theatre, where an active little coccus was delivering a lecture on “Housing Conditions in the Human Body”’. The lecture discussed the ‘clearance of the slum areas in the appendix and large intestine’, and discussed the potential for further ‘colonization’ of the liver, brain, and lungs: in these ways, it set up contemporary debates over hygiene, class, and empire. Alice also watched live cell division in action, what her bacterial companion called ‘the final Sublimation of Family Life’; as an evidently ‘motile’ bacterium (with, furthermore, a ‘pretty arrangement of flagella’), she was then invited to dance, and in the ‘pitiable efforts of non-motile forms . . . recognised at once the Bacterial Origin of the Charleston’. Other  familiar scenarios from the Victorian originals were recast, for instance when Alice is put on trial, accused of being a pathogenic member of the Human Race and having committed treason against ‘the Bacterial State’. ‘In vain Alice pleaded’, the article went on, ‘that she was only a poor student incapable of writing scientific articles.’

These two articles are just one small part of the continuing appeal of Alice, and how the original story has proved so inspirational for so many. By the mid-twentieth century the book was not only a familiar means of making in-jokes about a particular scientific subject, but also a way of thinking more generally about the challenges posed by new instruments, techniques, institutions and discoveries. Rabbit-holes and looking-glasses may have their place, but the surest way to Wonderland, these texts seem to show, was to be found in practising the sciences.

Melanie Keene is the author of Science in Wonderland: the scientific fairy tales of Victorian Britain (OUP, 2015). A historian of science at Homerton College, Cambridge, she has written widely on scientific books and objects from the eighteenth to the twentieth centuries, and on topics from candles and pebbles to board games, toy sets, and model dinosaurs.