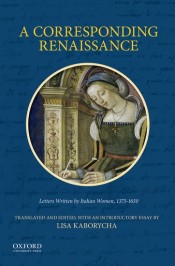 Venetian courtesan Veronica Franco (1546-1591) describes the perils of her profession in one of her Familiar Letters, which she published in 1580:

“To give oneself as prey to so many men, with the risk of being stripped, robbed or killed, that in one single day everything you have acquired over so much time may be taken from you, with so many other perils of injuries and horrible contagious diseases; to drink with another’s mouth, sleep with another’s eyes, move according to another’s desires, always running the clear risk of shipwreck of one’s faculties and life, what could be a greater misery?”

Writing letters was a quintessential part of everyday life in the Renaissance. The ability to write elegant, expressive, persuasive letters was a highly-prized skill. Beyond a practical necessity, letter writing was considered a high art. The Renaissance art of epistolarity, specifically the humanist penchant for modeling personal letters after those of Cicero, has been well documented. Less examined is what it meant for Renaissance individuals to publish their personal letters for all to read.

It has become a truism today that with the availabilty of online social media such as Facebook, Twitter, and Instagram, the barriers between private and public have been shattered, intimate details of peoples’ lives routinely shared with the world at large. We are living in an age when it is theoretically possible for anyone to enjoy Kardashian-like celebrity merely through typing a few keystokes on his or her electronic device. This is not an entirely new phenomenon, however; the advent of the technology of the printing press in Europe in the mid-fifteenth century opened up comparable possibilities for Renaissance individuals wishing to share details of their personal lives.

The trend was started by Pietro Aretino (1492-1556), the poet, polemicist, and pornographer who was the first to realize there was a market for familiar letters, printing his first volume of letters in 1538. A runaway success, the volume was reprinted twelve times in the next two years, causing Aretino to follow up this success with another five volumes over the course of the next two decades.

After Aretino, Italian letter books became a publishing phenomenon; numerous volumes of familiar letters were in circulation in the sixteenth century. Between 1538 and 1627 the number of letter books published in Italy rose to 540, on average six books per year appearing. Within less than a century nearly 40,000 letters were printed. French philosopher Michel de Montaigne (1533-1592) wrote in 1588: “These Italians are great printers of letters. I believe I have more than a hundred volumes of them.” Among these was the volume of Franco’s Familiar Letters, a copy of which the author sent to the Frenchman when he visited Venice in 1580.

Renaissance women participated in this publishing phenomenon, demonstrating a willingness to share their innermost thoughts and to expose intimate details of their lives to the broader reading public. In addition to Franco, volumes of letters by female authors as diverse as humanist Laura Cereta (1469-1499), actress Isabella Andreini (1562-1604), and nun Arcangela Tarabotti (1604-1652) were being published. Not all women were enthusiastic about having their works, whether letters, poems, or other writings appear in print; noblewomen Veronica Gambara (1485-1550) and Vittoria Colonna (c.1490-1547), for instance, preferred to maintain their privacy and vigorously resisted having their works published.

However, so popular were letters penned by women that several collections of familiar letters appear to have been written by men who published them under fictitious female names in order to cash in on the trend. Examples of this are Girolamo Parabosco’s 1547 Lettere amorose, which included love letters written by the male author in a female voice and Ortensio Lando’s 1548 Lettere di molte valorose donne, as well as the anonymously authored Lettere amorose di Celia Romana (1562)–so successful that it was reprinted ten times by 1628.

The specific content was different. There are no equivalents for “selfies” or extreme oversharing of explicitly sexual material in these letters. The reach of printed editions would have numbered in the hundreds, not the millions enjoyed by today’s bloggers.

Nevertheless, the intentions for publicizing oneself were strikingly similar in the sixteenth-century. Much has been made of historian Greenblatt’s concept of “Renaissance self-fashioning,” which looked at in practical terms can be viewed more simply as self-promotion. Fame, whether literary or otherwise, which had previously been an elusive prize, suddenly seemed within the grasp of authors savvy enough to have their words set in moveable type and marketed to the public.

Then, as now, there was a monetary value attached to celebrity, though money was only one of the rewards that Renaissance authors expected their letters to bring them, and often an indirect one. By prefacing one of her books of verse with a dedicatory letter to the duchess of Florence, poet Laura Battiferra (1523-1589) was able to promote not only her own career, but that of her husband, the sculptor Bartolomeo Ammannati (1511-1592), earning him lucrative commissions with the ruling Medici family. Then there was Tullia d’Aragona (c.1501-1556), who, besides being a courtesan, was an accomplished poet, and hoped to elevate her social status through literary self-promotion. From being forced by contemporary sumptuary legislation to wear a humiliating veil identifying her by her profession as a prostitute when she appeared in public, she wished to be identified with a poet’s laurel. Her 1547 Rime della Signora Tullia di Aragona e di diversi a lei, a collection of messages in verse, exchanged with the most celebrated literary figures of her day, ensured that d’Aragona’s reputation as poet would supersede that as a prostitute.

And finally, it is probably this circulation and exchange of written messages, even when they were not intended for print per se, which we find most familiar today. Women participated fully in the sharing of news and ideas in their letters, many of which traveled throughout Italy and Europe. The social circles in which such letters traveled could be viewed as a kind of sixteenth-century Facebook. Letters on scientific and philosophical topics might also be compared with participation in a Republic of Letters, similar to that associated with Enlightenment figures such as Voltaire (1694-1778) or John Locke (1632-1704). Examples of women’s writing of this kind include Camilla Erculiani’s (c.1540-c.1590) Letters on Natural Philosophy (1581) and Chiara Matraini’s (1515-1604) Lettere, with their reflections on philosophical and theological issues.

Chiara Matraini is turning 500 this year. If she were alive today would Matraini use Twitter or Facebook to communicate her ideas? Possibly, although Academia.edu seems more likely in her case. The point is that social networks were already being exploited during the sixteenth century, and women, whose contributions to Italian Renaissance culture have tended to be overlooked, were some of the most active on the literary scene. Perhaps women like Matraini, Gambara, or Colonna would not have embraced the more blatantly self-aggrandizing forms of today’s social media, although it is hard to imagine them not enjoying seeing their writings discussed on the OUPblog.

Lisa Kaborycha received a B.A. in Comparative Literature, an M.A. in Italian Studies, and a Ph.D. in Medieval and Early Modern European History. She has taught history at the University of California, Berkeley and at Menlo College. Currently, she lives in Florence, Italy, where she teaches courses on Renaissance history at the University of California, Florence Study Center and works as a Senior Research Fellow at the Medici Archive Project. She is the author of A Short History of Renaissance Italy (2010) and the editor and translator A Corresponding Renaissance: Letters Written by Italian Women, 1375-1650.