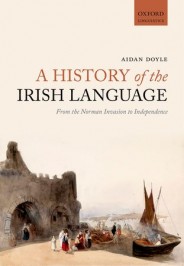 A History of the Irish Language: From the Norman Invasion to Independence

In the literature on language death and language renewal, two cases come up again and again: Irish and Hebrew. Mention of the former language is usually attended by a whiff of disapproval. It was abandoned relatively recently by a majority of the Irish people in favour of English, and hence is quoted as an example of a people rejecting their heritage. Hebrew, on the other hand, is presented as a model of linguistic good behaviour: not only was it not rejected by its own people, it was even revived after being dead for more than two thousand years, and is now thriving.

Irish people feel a bit inadequate when confronted with the case of Israel. “Why can’t you be more like the Israelis?” we are constantly being asked, in the same tone that an exasperated parent would use to a difficult child. Usually, we just hang our heads and mutter something about 800 years of colonization, or remind the interlocutor that James Joyce and/or U2 are Irish. I’m going to try a different tack here.

In language, as in life, it sometimes happens that a certain code outlives its use. By that, I don’t mean that the language has no practical value. From a purely linguistic point of view, no language is more or less practical than another. The numeral system of Latin seems unwieldy to us, but it worked fine for the men and women who conquered half of Europe. As somebody who teaches and does research on Irish, I get weary of people telling me with an air of infallible authority that English is logical, or that Irish is a feminine language, or more spiritual than English. What they really mean is that in the world we live in, English is the language of computer programming, and for most of us, our only encounter with Irish is at a folk-festival, or in the picturesque surroundings of the Atlantic seacoast. But that is an accident of history, unconnected to the languages themselves, which are just sequences of arbitrary sounds.

So what do I mean by a code outliving its use, then? Language does not exist independently of society and culture, and if a community comes under intense pressure from another one, it has to adapt to survive. That may involve changing technology, or religion, or language. In the case of Ireland, the Gaelic population came under such pressure in the 18th and 19th centuries. The Irish language didn’t fail its speakers, but another language, English, offered opportunities that Irish couldn’t compete with. And I’m not just talking about material benefits, such as employment or social advance. English offered the possibility of access to the world of print, and all that that entailed, new forms of cultural, political, and literary expression that could find no outlet at that time in Irish. Maybe English also offered a kind of escape, particularly for those Irish who emigrated after the Great Famine. Sometimes language, like history, becomes a burden.

“Yes,” you might say, “but what about the Jews who revived Hebrew? They didn’t go looking for new forms of self-expression. They didn’t try to throw off the shackels of the past.” Actually, they did. Many of the immigrants to Israel were native speakers of Yiddish. They exchanged their native language for Hebrew. Apart from the sheer inconvenience of this exchange for new arrivals, there was a huge cultural and emotional loss. Yiddish had been spoken for centuries by Jewish communities in Europe. It had a rich literature and folklore. Most of that heritage has been lost in the new, Hebrew-speaking society of modern Israel. There were good reasons for abandoning one language and taking on another, I’m not questioning that. Hebrew offers new forms of self-expression that Yiddish lacked, and it does not carry the negative connotations of the latter language, associated as it was with oppression of Jews in eastern Europe. But there was a huge loss as well. I imagine that most younger Israelis would have to read the works of the Nobel Laureate Isaac Bashevis Singer in translation. At least the Irish get to read W.B. Yeats and Seamus Heaney in the original.

Finally, it’s worth bearing in mind, even if you’re a linguist, that there is more to life than language, and that a lot can be carried over from one language to another. Many of the Gaelic songs of the past survived in macaronic form or in English translation. Hiberno-English, the result of the crossing of two linguistic strains, produced a fine literature in its heyday, although now it too is on the brink of extinction, as it is being replaced by a new, Americanized, global dialect. Change is part of language: you can embrace it, or resist it, but there’s no escaping it.

Header image credit:Cuneiform inscription on the left of the temple door by EvgenyGenkin. CC-BY-SA-4.0 via Wikimedia Commons.

Aidan Doyle is a lecturer in the Department of Irish at University College Cork. His main research interests include the syntax and morphology of contemporary Irish, and the history of the Irish language. He has contributed to several edited volumes published by John Benjamins, Mouton de Gruyter, and Peter Lang, and is the co-editor, with Siobhan Ni Laoire, of Aisti ar an Nua-Ghaeilge (Cois Life 2011). He is also author of A History of the Irish Language.