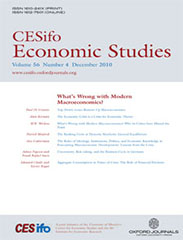 CESifo Economic Studies publishes provocative, high-quality papers in economics, with a particular focus on policy issues. Papers by leading academics are written for a wide and global audience, including those in government, business, and academia. The journal combines theory and empirical research in a style accessible to economists across all specialisations.

Gender is a central concept in modern societies. The promotion of gender equality and women’s empowerment is key for policymakers, and it is receiving a growing attention in business agendas. However, gender gaps are still a wide phenomenon. While gender gaps in education and health have been decreasing remarkably over time and their differences across countries have been narrowing, gender gaps in the labour market and in politics are more persistent and still vary largely across countries.

The following list of ten facts about economic gender inequality may represent a useful guide to identify the determinants of gender gaps.

1. Gender gaps have historical roots. These roots can be traced back to the organization of the family and to the traditional agricultural practices in the pre-industrial period, which influenced the gender division of labour, the role of women and the evolution and persistence of gender norms.

2. Culture matters in determining gender gaps. Gender stereotypes are well-established, both among men and among women. They influence the extent to which men and women share the same responsibilities, in particular in domestic work and childcare and they contribute to explaining gender gaps in the labour market.

3. Men and women have different attitudes and behaviours. On average women are significantly less likely than men to make risky choices and to engage competition. These differences can contribute to explaining gender pay gaps, glass ceilings, and the lower presence of women in high-paying jobs, or in highly competitive environments.

5. Education is the first engine of gender equality. Women and men are currently equally educated, and women often surpass male educational attainments in developed countries. However differences across fields of study, with a limited share of women in STEM disciplines, remain and may explain part of the still-existing gender gaps in access to the labour market and careers.

6. Gender gaps in employment and the glass ceiling are different phenomena, although they often go hand-in-hand. Even in countries where the problem of access to the labour market for women has been substantially solved, women still encounter obstacles in careers and in reaching top positions (ie. the glass ceiling).

9. Institutions play a crucial role in determining the glass ceiling. How to promote female leadership and the presence of women in top positions is a highly debated issue, which countries are addressing through a variety of policies, from the introduction of gender quotas to voluntary regimes. Gender quotas have recently attracted wide attention; they have been proved to be effective not only in increasing the number of women in top positions, but also in inducing a better selection process and a beneficial renovation of the ruling class.

These ten facts suggest that the determinants of gender gaps range from culture and history, to attitudes and behaviour, educational choices, family choices including maternity, firms’ behaviors, policy interventions, and economic development. These determinants are also strictly interrelated. Understanding these ten facts could be a useful guideline in helping to determine future policy on gender inequality.

Paola Profeta is Associate Professor in Public Economics at Università Bocconi, Milano. She is a co-editor of The Determinants of Gender Gaps, the latest special issue from CESifo Economic Studies. You can also follow Paola on Twitter.

Why do girls outperform boys on reading tests around the world?