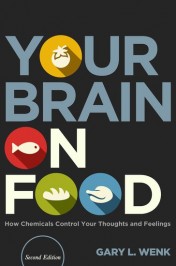 Your Brain on Food: How Chemicals Control Your Thoughts and Feelings, Second Edition

Does coffee enhance marijuana? A study published recently in the Journal of Neuroscience by neuroscientists from the Integrative Neurobiology Section of the National Institute on Drug Abuse, a branch of the National Institutes of Health, has finally provided a definitive answer: Yes, No, and it depends. I realize that sounds confusing, but their discovery does provide some fascinating insights into the workings of the brain, and why humans find coffee and marijuana so enjoyable. Their euphoric effects might be related to each other.

Your first question might be “why does anyone care?” These scientists were motivated to investigate this question following some surprising results using monkeys who were addicted to the active ingredient in marijuana, delta-9 tetrahydrocannabinol (THC). These monkeys could freely self-administer as much or little of THC as they wished. The monkeys were then given two different experimental drugs that reproduced some of the actions of caffeine in the brain. Depending upon the drug used, the monkeys either increased or decreased their self-administration of THC. The scientists were interested in understanding how this happened.

Caffeine has only one known action in the brain; it blocks the neurotransmitter receptor for the chemical adenosine. Adenosine receptors live on both sides of synapses. A synapse is the connection between one neuron and the next. Thus, adenosine receptors are involved in controlling both sides of the synapse. What the scientists discovered was that blocking the presynaptic adenosine receptors caused the monkeys to stop self-administering THC. In contrast, blocking the post-synaptic adenosine receptors caused the monkeys to increase their self-administration of THC. A previous study from the same research group (in rats) showed that caffeine aggravates the memory impairment induced by THC, strongly suggesting that coffee might actually enhance not only the addictive potential but the well-reported negative cognitive effects of marijuana. This would be particularly relevant in adolescents, when the brain is more vulnerable to the negative effects of marijuana.

The problem is that coffee cannot tell the difference between a pre- or post-synaptic adenosine receptor. This is where the story becomes quite interesting. The results of this study suggest that low doses of caffeine should decreased marijuana self-administration and that high doses of caffeine will increase marijuana self-administration. What remains unknown is whether drinking lots of coffee will enhance the marijuana euphoria.

This recent report is consistent with an earlier publication by a group of scientists from Rome who explored the possibility that coffee’s addictive properties also involve the brain’s marijuana-like neurotransmitter system. Taken together, the results of these studies suggest that this is how long term coffee addiction seems to develop in your brain.

When you first started drinking coffee, the arousal was all you wanted and also all that you got. Still, being more attentive and vigilant was all you needed to get through the day. Ultimately, due to tolerance, you needed more and more coffee each day to achieve the same level of arousal and vigilance. While all of this was occurring, something else far more mysterious was happening inside your brain; caffeine had begun stimulating your brain’s endogenous marijuana neurotransmitter system. These biochemical adjustments make avoiding that third or fourth cup of coffee even harder to accomplish.

Apparently, high doses of coffee makes us feel so good because it is able to tap into virtually every reward system our brain has evolved. Hidden within that hot black silken elixir is a chemical that has taken over your brain by mimicking the actions of marijuana. These new studies provide insight into a potential danger of caffeine to increase the addictive and negative cognitive effects of marijuana.

UPDATED 12 June 2015: Updated to clarify the monkeys were not given caffeine but drugs that reproduced some of its effects in the brain.

Gary L. Wenk, Ph.D. is a Professor of Psychology & Neuroscience & Molecular Virology, Immunology and Medical Genetics at the Ohio State University and Medical Center, a Fellow by the American Association for the Advancement of Science for distinguished contributions in the field of neuropharmacology, neurodegenerative diseases and neuroinflammatory processes and the author of Your Brain on Food: How Chemicals Control Your Thoughts and Feelings, Second Edition (Oxford University Press).