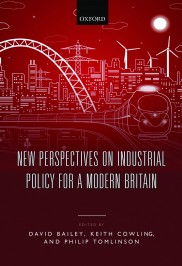 New Perspectives on Industrial Policy for a Modern Britain

As the UK general election draws near, the economy has again been the overriding feature of the campaign. Yet the debate itself has been pretty narrow, being principally framed around ‘austerity’ and the reduction of the size of the government’s budget deficit. The major political parties are all committed to eradicating this deficit, with the main question being the time-frame in achieving this goal.

Other economic issues such as reducing the UK’s burgeoning trade deficit, improving the UK’s manufacturing capabilities and promoting green technologies, tackling growing regional inequalities and rebalancing the economy, have to a large extent, been subservient to the debate. This is unfortunate, since addressing such issues is critical if the UK is to achieve balanced and sustainable growth, which is the route to eliminating the budget deficit and reducing the nation’s debts in the longer run.

Indeed, since the global financial crisis (GFC) in 2008, the UK has seen the slowest recovery since the 1930s. This has been punctuated with low productivity and a rising trade deficit which, at 6% of GDP, is the highest since records began. This rising trade deficit has occurred despite a near 30% depreciation in the value of sterling since 2009. There was a time when a ‘bad’ set of trade figures could influence the result of a general election (think 1970). Not anymore, it would seem.

More widely, the GFC highlighted the long-term fragility and unbalanced nature of the UK economy in terms of its over-reliance on sectors such as retail, financial services, and construction, to the detriment of manufacturing. In the immediate aftermath of the GFC there were calls, from some economic commentators, about rebalancing the UK economy, with a greater focus upon manufacturing and recognition of a greater role for the state in pursuing an active ‘industrial policy’ (or ‘industrial strategy’) to rebalance the economy.

Such calls were a clear departure from the neo-liberal model, which has dominated economic policymaking since the late 1970s. Industrial policy, after a long hiatus, is back in vogue, driven by concerns over competitiveness, globalization, de-industrialization, unemployment (and under-employment), and the comparatively slow growth of the British economy.

It has begun to can be seen as a catalyst for designing economic recovery strategies at regional, national, and EU levels as well as being a concerted strategy to develop new ‘clean-tech’ industries to tackle environmental challenges. Moreover, unlike some naive Keynesian demand management approaches and/or neo-classical supply-side policies (such as promoting ‘flexible’ labour markets and/or tax reform) where the tendency is to focus upon either the demand or supply side of the economy, industrial policy has the potential to offer an integrated and co-ordinated approach to economic management.

An active industrial policy may not only create and sustain domestic employment (thus sustaining demand, via investment and consumption multipliers), but it can also raise domestic industrial capacity and capability (a supply-side measure) for future growth.

One of the principal objections to industrial policy is that it ‘involves the state picking winners’. This argument is, however, rather staid. The case for industrial policy has long been made by some leading economists and policy-makers. In the UK, one of the most prominent exponents has been Lord Michael Heseltine, who, as President of the Board of Trade and Deputy Prime Minister, once famously promised to ‘intervene before breakfast, dinner, and tea’ for British industry, at the Conservative Party Conference in 1992. His recent report, ‘No Stone Unturned: In Pursuit of Growth’ (2012), has helped to place industrial policy back on the political agenda, notwithstanding the narrowness of the election debate.

The recent comparative success of the BRICs (Brazil, Russia, India, and China), and previously acclaimed industrial policies of countries such as Japan, South Korea, Germany, and even the USA suggest an active state can (and should) play a positive role in facilitating economic growth. Modern industrial policy is about creating the environment for sectors and regional clusters to prosper, for example through state-business partnerships that enable the discovery of tacit knowledge. In essence, modern industrial policy is about ‘creating successful stables from which winners can emerge’.

Fortunately, the debate has moved beyond a narrow ‘market failure’ perspective to consider wider market and systemic failure issues that necessitate a role for industrial policy (information, co-ordination, missing linkages) as well as a broadening to consider evolutionary/systems-based views.

This is not easy to answer since industrial policy is a wide-ranging concept and encompasses a range of policy instruments. These include (but are not limited to) support for ‘infant industry’, trade policies, science and technology policies, state procurement, regulation (and de-regulation), and anti-trust policy, merger policy, policies in relation to foreign direct investment, intellectual property rights, the allocation of financial resources and, in recent years, the development of clusters and regions.

This is an extensive list, but for policy-makers, the salient question is to assess the scale (and probable effectiveness) of industrial policies in meeting desired objectives before their implementation. There is now a strong case, for UK industrial policy to be afforded an institutional status similar to both UK monetary and fiscal policies. At the very least, industrial policy could be ‘stabilized’ through regular strategic, long-term reviews as the Wright Review (2014) has suggested.

How to face the moral challenges of organizations from the inside