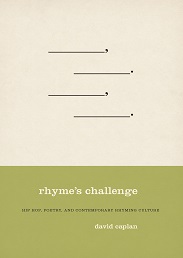 Hip hop has increasingly influenced a new generation of American poets. For instance, the current issue of Poetry excerpts poems and essays from the recently published anthology, The BreakBeat Poets, edited by Kevin Coval, Quraysh Ali Lansana, and Nate Marshall. In the anthology’s introduction, Marshall asserts:

This is the story of how generations of young people reared on hip-hop culture and aesthetics took to the page and poem and microphone to create a movement in American letters in the tradition of the Black Arts, Nuyorican, and Beat generations and add to it and innovate on top.

Even observers who do not particularly like hip hop recognize that it offers contemporary poets an important resource. “I think the Shakespeare of this century would certainly—would certainly—learn from rap, yes,” Geoffrey Hill, the octogenarian Oxford Professor of Poetry, insisted to a television interviewer.

Hip hop’s influence has reached a point where it would be helpful to clarify what poets have learned from this genre of music. To borrow Wittgenstein’s term, what “family resemblance” distinguishes the genre of hip hop poetry? To start the conversation, I propose the following “network of similarities”:

David Caplan is Charles M. Weis Chair in English and Associate Director of Creative Writing at Ohio Wesleyan University and the author of Rhyme's Challenge: Hip Hop, Poetry, and Contemporary Rhyming Culture. His previous books include Questions of Possibility: Contemporary Poetry and Poetic Form and the poetry collection In the World He Created According to His Will.