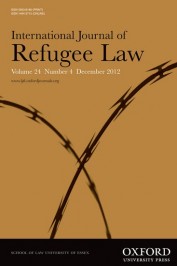 The International Journal of Refugee Law serves as an essential tool for all engaged in the protection of refugees and finding solutions to their problems. It regularly provides key information and commentary on today's critical issues, including: the causes of refugee and related movements, internal displacement, the particular situation of women and refugee children, the human rights dimension, restrictive policies, asylum and determination procedures, populations at risk, and the conditions in different countries.

Asylum is the protection that a State grants on its territory or in some other place under its control—for instance an Embassy or a warship—to a person who seeks it. In essence, asylum is different from refugee status, as the latter refers to the category of individuals who benefit from asylum, as well as the content of such protection. Recently, there has been renewed interest in the debate on asylum. The highly publicised decision by Ecuador to grant asylum to WikiLeaks’ founder Julian Assange in June 2012 (which prompted a Resolution of the Organisation of American States), as well as the international dispute in 2013 involving several countries across the world in the case of Edward Snowden (which prompted the European Parliament to call on European States to grant him asylum) brought this debate back into focus, particularly as it relates to issues of State sovereignty.

The international regime on the status of refugees was born in the inter-war period in the early 20th century. Today, it is internationally agreed upon in accordance with the 1951 UN Convention Relating to the Status of Refugees and its 1967 Protocol. Although asylum is a much older institution in international law and its rich historical roots in State practice are well established, the Refugee Convention does not officially recognize a right of asylum. Despite attempts to codify it in international human rights treaties of universal scope, States’ objections left asylum unwritten in the UN system, although international human rights treaties of regional scope in Latin America, Africa, and Europe all recognize a right to asylum. The lack of a “written rule” in the UN system has contributed to the perception that there is no right to asylum in international law, other than a right of States to grant it at will.

Yet international law is not only about written rules, but also about unwritten principles. The actual legal rules exist to carry an idea of Justice at the service of the human person and therefore their lawfulness requires that they comply with such ideals. The former President of the International Court of Justice, Dame Rosalyn Higgins, expresses this duality in the following terms: “International law is not rules. It is a normative system…. The role of law is to provide an operational system for securing values” (Problems and Process, 1995).

Asylum has long constituted one of the fundamental principles ensuring the well-being of human persons. By providing a historical normative framework common to different societies, it has shaped relations between sovereigns. Evidence of its ancient normative character can be found in its nature as a religious command, a call for divine protection against human injustice. All three monotheistic religions impose a duty of hospitality and protection to strangers, which constitutes the anthropological and historical background to the law and practice of asylum over time.

Today, asylum is enshrined in most constitutions across different legal cultures. They all draw from the liberal-democratic tradition that emerged from the French Revolution, which changed the conception of the State and the relationship between individuals and the State. The wording of constitutions and the broad range of beneficiaries of asylum reflect the historical tradition of an institution that offers protection on a variety of grounds, including but not limited to those that give rise to refugee status. In addition to refugees, those who flee persecution on account of their fight for freedom, democracy, and the rights of others are also protected by asylum.

The constitutional rank of asylum speaks to its nature as a ruling principle of the State itself and the values that it protects worldwide. As such, it informs international law itself. The protective nature of asylum is therefore twofold. On one hand, it protects the person who is persecuted, and on the other, it protects the higher values upon which the State is founded: freedom, justice, democracy, and human rights. These values also form the core of international law, recognised in Article 1 of the United Nations Charter on the purposes of the United Nations. The continuous historical presence of asylum across civilizations and over time, as well as its crystallization in a norm of constitutional rank among States worldwide, suggests that asylum constitutes a general principle of international law, and is legally binding when it comes to the interpretation of the nature and scope of States’ obligations towards individuals seeking protection.

Image Credit: “Refugees from DR Congo board a UNHCR truck in Rwanda” by Graham Holliday. CC BY NC 2.0 via Flickr.

María-Teresa Gil-Bazo is Senior Lecturer in Law at Newcastle University and Member of the Spanish Bar Council. Prior to joining Newcastle Law School, María-Teresa was Lecturer in International Human Rights and Refugee Law at Oxford University (2004-2007), where she has also been Director of its International Summer School in Forced Migration (2009-2010). María-Teresa has provided Expert Advice to the European Commission (2008) and the European Parliament (2011) during the proposals and negotiations of the recast Common European Asylum System, and to the Government of Ecuador on Diplomatic Asylum (the Julian Assange case) in 2012. She is the author of ‘Asylum as a General Principle of International Law’ in the International Journal of Refugee Law, which is available to read for free for a limited time.