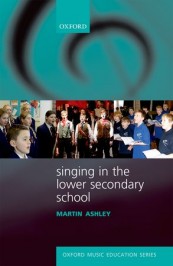 Singing in the Lower Secondary School

Music as a school subject, it so often seems, retains its apparently perilous position in the school largely as a result of the unstinting pressure of advocacy groups. The 2004 Music Manifesto that underpins much of the current drive to keep school music alive was unashamedly “a voluntary, apolitical 13-strong Partnership and Advocacy Group”. Personally, I find this slightly challenging because I was fortunate enough to attend a school during the 1960s where advocacy was quite unnecessary. The important position of music was never doubted within a curriculum organized along classical, liberal principles. Plato’s instruction that “children enter school at six where they first learn the three Rs (reading, writing and counting) and then engage with music and sports” was part of the very fabric of the place.

In mature years as a researcher, I have come to realize just how privileged I was. Advocacy of music in an educational world that sees little value in it seems an ever-present necessity for many children if they are to receive any music education at all. Much of this advocacy, however, seems to me to be based upon extrinsic benefits. Music develops perceptual and language skills; it helps with literacy and numeracy; it promotes intellectual development and creativity; it engenders social and personal development and promotes health and well-being. These are all very worthy in themselves, but what about music for music’s sake? And how valid are the claims for extrinsic benefits anyway? How do we know that this isn’t just another so-called “Mozart effect,” ill-supported by serious, replicable research? How can we be confident that other activities such as drama or foreign languages don’t equally confer such benefits?

Susan Hallam has recently conducted an extensive analysis of this question. She concludes that there is indeed a strong case for the benefits of active engagement with music throughout the lifespan. She adds, though, a most important caveat: “…the positive effects of engagement with music on personal and social development only occur if it is an enjoyable and rewarding experience. This has implications for the quality of the teaching.” If this is true for music in general, how much more true might it be for singing, a musical activity that has had more than its fair share of advocacy in recent years? Graham Welch speaks for many when he writes about the “sense of embarrassment, shame, deep emotional upset, and humiliation” felt by many adults recalling their experience of school singing. He notes how these feelings are “usually accompanied by reports of a lifelong sense of musical inadequacy.”

My own position on this is quite clear. As well as being positive and non-threatening, singing must serve a clear purpose in the development of musical skill and knowledge, and be perceived by students to do so. Mere participation advocacy is insufficient and there’s been rather too much of it. What is needed is the advocacy of good pedagogy and the advocacy of a clear pedagogical rationale. The late Brian Simon wrote that “pedagogy—the act and discourse of teaching—was in England neither coherent nor systematic, and that English educators had developed nothing comparable to the continental European ‘science of teaching’.” Recalling this, Robin Alexander has been critical of approaches to innovation that “rely on large print, homely language, images of smiling children, and populist appeals to teachers’ common sense.”

Why do we want children to sing? Why should it be advocated by Darren Henley that all children (boys as well as girls) should sing in school up to the age of fourteen? Could such an ambition be counter-productive if the consequences are boredom, anxiety, or even humiliation? Or if children develop no skills or learn nothing worthwhile about music through singing? Young people, boys in particular, do sing. Listen outside the bathroom door or watch them when their iPods are plugged in and they think they’re not being judged. Why should they then waste their time on a “school song” that embarrasses, bores, and frustrates them because it’s pitched outside the tessitura of their changing voices and contributes nothing positive to their learning? What is needed is the advocacy of a sound music pedagogy in which singing has a clear part to play in the development of audiation (the ability to hear and think about music internally). OFSTED have made their second priority for improving music education to “improve pupils’ internalization of music through high-quality singing and listening.” This demands more than homely language and images of smiling children.

Martin Ashley retired from his role as head of research in the Faculty of Education at Edge Hill University in April 2013 in order concentrate more intensively on his research into young male singing and the promotion in the UK of the Cambiata singing concept for adolescent voices. He is the author of Singing in the Lower Secondary School.

Tips for adapting the elementary music curriculum to online teaching