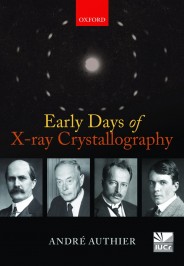 The International Year of Light aims to raise global awareness about how light-based technologies can promote sustainable development and provide solutions to global challenges in energy, education, agriculture, and health. To celebrate this special year over the course of March, three of our authors will write about light-based technologies and their importance to us. This week, André Authier discusses the discovery and development of X-rays.

The International Year of Light provides a good opportunity to revisit the early studies on the optical properties of X-rays. X-rays were discovered by W. C. Röntgen on the evening of 8 November 1895 while he was redoing some of Hertz’s experiments on cathode rays. By the end of the year, even before informing the world of his discovery, he had observed the basic properties of X-rays: like light, they propagate as straight lines and are diffused by turbid media, but are not deflected by a prism, nor refracted or reflected by matter; they pass through bodies, as shown by the radiograph of his wife’s hand. Medical applications were proposed in France and England as early as the end of January 1896.

These rays were mysterious indeed. Röntgen himself thought X-rays might be longitudinal waves, but E. Wiechert in Germany (1896) and G. G. Stokes in England (1896) suggested they were pulses of electromagnetic radiation, and J. J. Thomson, at the Cavendish in Cambridge, expressed the amplitude of these pulses when scattered by an electron (1898).

The first experimental proof of the wave nature of X-rays was given by C. G. Barkla in Liverpool, who showed that they are polarized (1905). W. H. Bragg at the University of Adelaide, Australia, however, thought differently. He was convinced that X-rays were corpuscular and were neutral pairs made of one a-particle and one b-particle (1907). In Germany, A. Sommerfeld was sure of the wave nature of X-rays and calculated their diffraction by a slit (1900; 1912), while W. Wien and J. Stark thought they were light quanta (1907); J. Stark even thought they were material bodies (1909).

The definite proof of the wave nature of X-rays was provided on 21 April 1912 by a seminal experiment conducted by W. Friedrich, Sommerfeld’s assistant, P. Knipping, a PhD student of Röntgen, and M. Laue, privatdozent in Sommerfeld’s group, all of whom observed diffraction spots due to the ‘interferences of X-rays taking place in a copper sulfate pentahydrate crystal as a result of the reticular structure of the crystal’. The experiment had been conceived by Laue after a discussion with P. P. Ewald relative to the latter’s thesis (January 1912). The subject of that thesis, proposed by Sommerfeld, was ‘to find the optical properties of an anisotropic arrangement of isotropic resonators’. It was a theory of dispersion in a periodic medium, while Planck’s and Lorentz’s theories held in amorphous media. Ewald’s treatment involved complicated mathematics implying transforming sums into integrals, which was not an easy task when Fourier transforms were not available. Ewald therefore asked for the advice of a theoretician, Laue. Instead of giving an answer, Laue asked what the distance was between resonators. When told that they were of the order of 1/1000 of the wavelength of visible light and that Ewald’s theory was also valid for very short wavelengths, Laue immediately ‘anticipated the occurrence of interference phenomena with X-rays’. His intuition was rewarded by the outstanding success of the experiment of 21 April 2012, which opened the prodigiously rich field of X-ray crystallography. The corpuscular nature of X-rays was shown by Compton (1923) when observing inelastic scattering; and the dual nature of light and X-rays was, of course, interpreted by de Broglie’s wave mechanics (1924).

Laue calculated the intensity of the X-rays diffracted by the crystal, neglecting the interaction between waves scattered by successive resonators. This is the so-called geometrical or kinematical theory, which is valid only for very small or highly imperfect crystals and is still used in crystal structure determinations. Laue, however, had made a mistake because he thought that the interferences were due to the characteristic radiation from the X-ray tube, discovered by Barkla in 1909. W. H. Bragg’s son, W. L. Bragg, corrected this, showing in November 1912 that the interferences were between waves from the continuous background of the tube, being reflected by sets of equally spaced lattice planes in the crystal at specific angles. He and his father were the pioneers of X-ray crystal structure determinations.

As for Ewald, when he heard the account of Laue’s experiment some time in June 1912, he immediately made a connection between the formation of the Laue diffraction spots and his theory, which he interpreted geometrically by means of the reciprocal lattice. Ewald then extended his theory to the X-ray case (1916-1917). Since it is based on the resolution of Maxwell’s equations in a medium with a periodic arrangement of resonators, he called it a “Dynamical Theory” in reference to Maxwell himself, who had explained that his own theory was ‘a dynamical theory of the electromagnetic field’ (1865).

The interaction of X-rays with matter is very weak and explains why its index of refraction is very close to 1 (it differs from 1 by a quantity of the order of 10-5) and why Röntgen did not observe any refraction. Ewald calculated the index of refraction and showed that, due to refraction, Bragg’s reflections are shifted by a small angle. This shift was first measured in Sweden in M. Siegbahn’s laboratory (1919-1920). The first direct measurement of the index of refraction of X-rays by matter was only made later by A. Larsson, M. Siegbahn, and I. Waller using a glass prism (1924). Despite the very small reflectivity of X-rays, it has been possible to build X-ray microscopes using grazing incidence reflective optics (Kirkpatrick and Baez 1948), Fresnel zone plates (Baez 1952), Bragg-Fresnel lenses (Aristov et al. 1986), or refractive lenses (Snigirev et al. 1996) to focus the X-rays. They are used nowadays for high resolution non-destructive imaging with synchrotron coherent radiation.

The dynamical theory of X-ray diffraction predicts that when the diffracting crystals are highly perfect, such as silicon or germanium, the diffraction lines are very narrow. This property has been made use of to produce X-ray interferometers (U. Bonse and M. Hart, 1965), and a big variety of optical devices for focusing synchrotron radiation.

André Authier is Professor Emeritus at the Université P. et M. Curie, Paris, and a member of the German Academy of Sciences, Leopoldina. He is a former President of the International Union of Crystallography (1990-1993). His books, Early Days of X-ray Crystallography and Dynamical Theory of X-ray Diffraction, are published by Oxford University Press.

Innovation: in and out of the Budongo