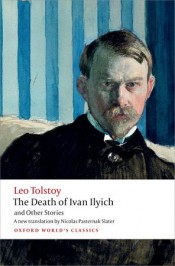 The Death of Ivan Ilyich and Other Stories

Imagine that your local pub had a weekly, book themed quiz, consisting of questions like this:

‘Which writer concerned himself with religious toleration, explored vegetarianism, was fascinated (and sometimes repelled by) sexuality, and fretted over widening social inequalities, experienced urban poverty first hand while at the same time understanding the causes of man made famine?’

Would you be buying the drinks that night, or going home penniless? To be fair, it’s a difficult question, and the answer — Tolstoy — might not come immediately to mind. Yet he does tick all these boxes, even though we tend to think of him first as the definitive Russian nineteenth-century realist and a great sage of timeless values. Tolstoy’s death in 1910 made front pages news across the world because of his moral authority rather than literary genius. (The final chapter of his life, cloaked in family drama, also made a gripping film — The Last Station in which Christopher Plummer incarnates Tolstoy right down to the tip of his — very prominent — nose.) Yet looking at a contemporary pencil portrait gives a glimpse of the complexity of the man and, yes, his brand and image:

This sketch of the older Tolstoy — Tolstoy as he was when he wrote the Death of Ivan Ilyich and the Purloined Coupon — is the work of Leonid Pasternak, father of the poet and novelist Boris Pasternak, and grandfather of Nicolas Pasternak Slater who worked with me on the new Oxford World’s Classics edition of Tolstoy’s later works. Leonid Pasternak, a marvellous colourist in the Impressionist manner, was also a gifted illustrator of fiction, which earned him a medal at the World Fair in Paris (1900). He created haunting illustrations for Tolstoy’s Resurrection (1892). His style combines a wash of grey pencil that is softly textured, and sharply drawn facial features, especially brooding eyes.

This sketch from the family collection is unpublished, and it is generous of Nicolas to share such a striking, unknown image. In profile he looks grand, focused to the outer world without worldly vanity. His stillness has hidden energy (those cross-hatchings seem like coiled springs read to pop). Tolstoy in old age was small of stature, as many visitors and acquaintances noted with surprise. But his presence here seems massive. Broad-shouldered, his hands tucked into the sides of his peasant blouse; if you look at the torso then you think this is the Tolstoy who boasted to Gorky, the real son of a real peasant, that ‘I am more of a peasant than you, and can feel things the way peasants do better than you can!’ But if you concentrate on the head, the brow slightly furrowed in thought, it seems worthy of a classical bust. The look is more Aristotle or Epicurus, or any ancient philosopher, than it is the Russian mouzhik or peasant male, and somehow Pasternak caught the two elements Tolstoy tried to fuse in his personality.

From a literary point of view, perhaps we might compare Tolstoy to one of the great Victorians: a Russian George Eliot in his moral compass and conjuring of village life, a Russian Trollope in his understanding of hierarchies and institutions. But labels can’t really contain him. In many ways Tolstoy is timeless, like Homer, due to his ability to capture the breadth of human variety. He is timeless in the sense of belonging to all times. Yet in the portrait, and in his later work, I recognize a completely timely figure. We are in touch with him not only because he put his finger on so much about living. He speaks to us because he fused a transcendent view with a grasp of the realities of nineteenth society, political economy, and the law that remain with us in some degree. Credit crunch? The schoolboy who forges the coupon is hardly a Wall Street insider-trader. Yet in a world of credit everything and everyone turn out to be connected. Moral discredit could be said to be a derivative of minor fraud.

Lord Skidelsky, the economic historian and biographer of Keynes and his son Edward, recently published an essay with the title How Much is Enough?: Money and the Good Life. That very question in relation to money and possession permeates Ivan Ilyich and Tolstoy’s other short stories. In these parables Tolstoy implies answers by creating virtuous characters. They don’t live in the real world — their economic circumstance and outlook belong to a vision of an early, ahistorical Christianity, and they are to be contemplated like saints or icons. In his true fictions, working out the answer to the question, ‘how much is enough?’ can be a matter of trial and error in which the margin for error is very slender. The difference between a healthy capitalist appetite and greed isn’t clear-cut. After all, it’s not obvious that Vasily, the merchant in ‘Master and Workman’ is being punished, is it? But Tolstoy seems to suggest that he, and Ivan Ilyich, have been dulled by their wants into being less than alert about the dangers of circumstance. Memento mori: the stories remind that a good life might be measured by a good death, which involves a moral reckoning and not an actual balance sheet.

Tolstoy the ‘wannabe’ peasant, as portrayed in the Pasternak pencil portrait, has turned his back on a material life. His genius at contemplating human beings in the round as biological, psychological, spiritual, individual, familial, social creatures is well appreciated. But it’s easy to forget – and the point really came home to me as I worked on the Ivan Ilyich collection — what a great modern he is and how strongly he reflects fin-de-siècle anxieties. Tolstoy is no less a student of decadence, sexual obsession, stifling bourgeois convention, environmental degradation than an Ibsen or Maeterlinck or, for that matter, Beckett. It’s not for nothing that Gabriel Josipovici, one of the great advocates as fiction-writer and critic of European modernism, identifies The Death of Ivan Ilyich as one of the ten greatest novellas ever published. He puts him in the company of authors great fathomers of the existential puzzle like Melville and Kafka, Mann — yes, we can see that — and, very discerningly, playful ‘meta’ authors such as Robert Pinget (Passacaglia) and George Perec (Un Cabinet d’Amateur). Tolstoy is so readable and so clever at quickening and slowing the reader’s own pulse (are there better page turners than Master and Worker? could any work go more deliberately than The Death of Ivan Ilyich? — that we can forget that, like the cutting edge modernists, he recreates forms of storytelling to delve into consciousness. He has everything — the real and traditional, the modern and even the post-modern. That adds up to the timeless, I think.

Andrew Kahn has written widely on Russian literature. His books include The Cambridge Companion to Pushkin (2006) and Pushkin's Lyric Intelligence (OUP, 2008, pbk 2012). For Oxford World's Classics he has edited Pushkin's The Queen of Spades and Other Stories, Montesquieu's Persian Letters, Lermontov's A Hero of Our Time, and Tolstoy's The Death of Ivan Ilyich and Other Stories.