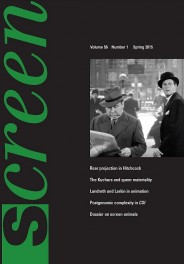 Screen is the leading international journal of academic film and television studies. From video art to popular television, from Hollywood to Hong Kong, from art cinema to British film finance, Screen authors cover a wide range of issues, both contemporary and historical, from a variety of disciplinary perspectives.

Performances by dogs are a persistent feature of contemporary cinema. In recent years, audiences have been offered a wide range of canine performances by a variety of breeds, including Mason the collie in the remake of Lassie, Jonah the labrador retriever in Marley & Me, the akita in Hachi: A Dog’s Story, the dogo argentino in Bombón: El Perro, Uggie the Jack Russell terrier in The Artist, and numerous others.

However, a number of recent films aimed at children present performances by dogs in which a new phenomenon is visible. Films such as Cats & Dogs (and its sequel), Underdog, Beverly Hills Chihuahua, and Marmaduke combine the traditional canine actor with digital effects. Unlike films in which animal characters are wholly constituted through computer-generated imagery, the animals which feature in this group of films are composite beings, in which the bodies of the animal actors used during the shoot work in tandem with the virtuosity of visual effects personnel in post-production.

Supplementing real dogs with digital animation produces performances that have benefits on many different levels. Firstly, they are much more effective dramatically because they can become more anthropomorphically expressive to suit the needs of the story. Economically they are less time-consuming and therefore less expensive because the performance is no longer determined by the unpredictable or intractable volition of real animals, however ‘well-trained’. The problems that arise even when working with ‘professional’ dog actors can be exasperating, as Lance Bangs’ short film The Absurd Difficulty of Filming a Dog Running and Barking at the Same Time (shot on the set of Spike Jonze’s Where The Wild Things Are) makes abundantly clear. The technological mediation of dog actors’ performances by digital effects allows contemporary filmmakers to overcome such problems and present, should they so wish, dogs flying and talking at the same time.

While the Palm Dog, a fixture at the Cannes Film Festival since 2001, has been awarded to both live (such as Lucy, from Wendy and Lucy) and animated dogs (such as Dug, from Up) – it is now the case that much popular children’s media features performances by dogs in which the distinction between real and animated animals is blurred. Two Great Danes, Spirit and George, are credited for the lead role in Marmaduke (with Owen Wilson providing the voice), but the characterization owes as much to the expertise of various modellers, riggers, texturers and compositors as it does to either of the dogs. A ‘digital muzzle replacement’ enables Marmaduke to appear to address the spectator directly, while the digital manipulation of the dog’s eyebrows and ears allows for a range of facial expressions that coincide with the inflections of Wilson’s vocal performance (the flatulence was presumably also added in post-production). While computer-generated visual effects are used throughout the film to ‘animate’ the various dog actors’ faces in ways that support the human actors’ vocal performances, they are also deployed in certain comic sequences. For example, when Marmaduke breakdances or goes surfing, the body of the dog is completely replaced with digital animation for the purpose of presenting ‘moves’ that a real dog would be incapable of executing (such as head-spins and somersaults). Nowadays, digital effects routinely provide the comic spectacle of such ‘realistic’ dogs moving and talking like cartoon canine characters through the photographically real spaces presented by the live-action film.

“The algorithmic programming which enables such composite canine performances is, in important respects, analogous to the manipulation of dogs’ genetic code in selective breeding”

The algorithmic programming which enables such composite canine performances is, in important respects, analogous to the manipulation of dogs’ genetic code in selective breeding. Yi-Fu Tuan has described domestication as involving the manipulation of a species’ genetic constitution through breeding practices. For dogs, this involved their transformation into aesthetic objects. Harriet Ritvo has argued that when breeders ‘redesigned’ the shape of dogs in accordance with ‘swiftly changing fashions’ the dog’s body ‘proclaimed its profound subservience to human will,’ becoming ‘the most physically malleable of animals, the one whose shape and size changed most readily in response to the whims of breeders’.

The manipulability of dogs, in other words, anticipates the inherently malleable digital image. The various exaggerated morphological features that characterize the conformation of the pedigree dog – such as the large head, the flat face, the long ears or the short legs – were produced by a systematic stretching and shrinking of the species according to specific aesthetic criteria, with serious implications for the physical and psychological well-being of the individual dogs.

Composite animal performances like those featured in Marmaduke or the Beverly Hills Chihuahua films can thus reveal for us the repressed histories of such subjection. These hybrid performances, which present personified and plasmatic domestic pets for our entertainment, remind us that dogs have long endured such subjugation. Indeed they remain subordinate to, and constituted by, an aesthetic and technological regime in which they are exploited as if they were already CGI images, and ‘redesigned’ according to the logic of what Philip Rosen has called the ‘practically infinite manipulability’ of digital cinema.

Michael Lawrence is Lecturer in Film Studies at the University of Sussex. He is the author of Sabu (British Film Institute, 2014), the co-editor, with Laura McMahon, of Animal Life and the Moving Image (British Film Institute, 2015) and the co-editor, with Karen Lury, of The Zoo and Screen Media: Images of Exhibition and Encounter (Palgrave Macmillan, 2015). His current research project focuses on stampede sequences in the cinema. Michael Lawrence is the author of 'Practically infinite manipulability: domestic dogs, canine performance and digital cinema', an article recently published in Screen journal.