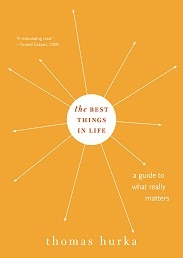 The Best Things in Life: A Guide to What Really Matters

Philosophers love to complain about bad reasoning. How can those other people commit such silly fallacies? Don’t they see how arbitrary and inconsistent their positions are? Aren’t the counter examples obvious? After complaining, philosophers often turn to humor. Can you believe what they said! Ha, ha, ha. Let’s make fun of those stupid people.

One sign of this contempt is the refusal of most philosophers even to try to express their views clearly and concisely enough for readers without extraordinary patience and training. Another sign is that many top departments today view colleagues with suspicion when they choose to write accessible books instead of technical journal articles. Philosophers often risk their professional reputations when they appear on television or write for newspapers or magazines. How can they be serious about philosophy if they are willing to water down their views that much? Are they getting soft?

Of course, there is a place for professional discourse. Other academic fields from physics to neuroscience also contain tons of technical terms. Professional science journals are rarely enjoyable to read. The difference is that these other fields often work hard to communicate their ideas to outsiders in other venues, whereas most leading philosophers make no such effort. As a result, the general public often sees philosophy as an obscure game that is no fun to play. If philosophers do not find some way to communicate the importance of philosophy, we should not be surprised when nobody else understands why philosophy is important.

This misunderstanding is sad, because philosophy deals with important issues that affect real people. Metaphysicians propose views on free will and causation that could change the way law ascribes responsibility for crimes or limits access to pornography on the grounds that it causes violence to women. Political philosophers defend theories with useful lessons for governments. Philosophers of science raise questions about the objectivity of science that could affect public confidence in evolution or climate change. Philosophers of religion and of human nature present arguments that bear on our place in the universe and nature. Philosophers of language help us understand how we can understand each other when we talk. And, of course, ethicists talk about what is morally wrong or right, good or bad, in situations that we all face and care about.

Walter Sinnott-Armstrong is the Philosophy in Action series editor and is the Chauncey Stillman Professor of Practical Ethics in the Department of Philosophy and the Kenan Institute for Ethics at Duke University.