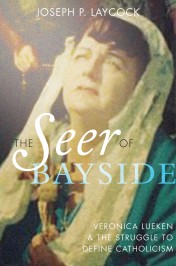 The Seer of Bayside: Veronica Lueken and the Struggle to Define Catholicism

From 1970 to 1975, Bayside Hills—a pleasant and prosperous neighborhood in Northeastern Queens, a borough of New York City—was embroiled in controversy when a local woman named Veronica Lueken announced that the Virgin Mary was appearing to her at St. Robert Bellarmine’s Church. At first Lueken was regarded as a “local kook.”  Then, in 1973, a traditionalist Catholic group from Canada called The Pilgrims of St. Michael declared her “the seer of the age” and pilgrims started to flock to Bayside Hills. They came to see Lueken go into ecstasy and deliver “messages from heaven” transmitted by Mary, Jesus, and a host of saints.

Eventually, Lueken’s vigils drew throngs of up to two thousand people. This created a serious problem for Bayside Hills. At the prompting of the Bayside Hills Civic Association (BHCA), a representative of the Diocese of Brooklyn wrote Lueken a letter asking her to stop the disruptions to the community. But Lueken insisted that heaven had called her to St. Robert Bellarmine’s and that the vigils could not be relocated. This resistance led to a series of escalations that came to be remembered as “The Battle of Bayside.”

Kevin J. Farrelly grew up in Bayside Hills and personally witnessed the Battle of Bayside. Farrelly, who graduated from Robert Bellarmine’s elementary school, was an undergraduate at Columbia University when Lueken’s group was forming. Today, he is a Manhattan lawyer and in the 1990s served as president of the Bayside Hills Civic Association. I sat down with him to discuss this unusual chapter of American Catholic history from an eyewitness perspective.

Joseph P. Laycock: You’ve described inviting friends to come watch the vigils during the 1970s. Can you describe what it was like to be in Bayside Hills while a vigil was going on?

Kevin J. Farrelly: The early vigils typically consisted only of Lueken and a few other people, usually women. They knelt on the lawn near the statue of Mary on the grounds of what had recently become the former church of St. Robert Bellarmine Parish. In the spring of 1970, a new church building was opened a block away. The former church would eventually become the parish gymnasium.

In those early years, Lueken was considered a neighborhood oddity. I do not recall that her activities were particularly disruptive during that period. Things changed dramatically, however, when she affiliated with the Canadian group. Soon, hundreds of people regularly began attending the vigils, which were held every Sunday afternoon and usually one evening a week, on days which Lueken’s group considered holy. What had been a mere neighborhood oddity soon grew into a major public nuisance, with scores of people crowding onto the old church lawn, sidewalks, and streets, with their buses parking in front of the houses in Bayside Hills.

St. Robert’s eventually removed the statue of Mary and erected a fence to keep people off the lawn near the old church. Interestingly, only a few years before, my sister Patricia, while she was a student at St. Robert’s, had placed a floral wreath on that statue’s head during a May crowning ceremony. When the church property was denied them, Lueken and the vigil group (we never called them “Baysiders” then) took to the grassy malls on 56th Avenue, which ran alongside the old church. Eventually the police insisted that the buses unload their passengers near Queensboro Community College, about a half mile from St. Robert’s. I can still vividly recall the dramatic sight as the vigil people marched in a procession from the College. At the head of the procession, men carried their own statue of Mary, bedecked with a gleaming gold crown and a bright blue cape.

Bayside Hills was then, and remains today, a quiet, bucolic residential community with little vehicular traffic on its streets and avenues. When vigils were held, throngs of people, some of whom used the bushes in front of houses to relieve themselves, disturbed the peaceful atmosphere. There were also reports that vigil people would chastise neighborhood girls for what they considered to be immodest attire. Soon, residents took to the sidewalks along the malls to protest the vigils.

Joseph P. Laycock: You’ve also described wanting to write a paper on the vigils at Columbia. When did you first suspect that what you were seeing had historical significance? And why did your professor discourage writing on the topic?

Kevin J. Farrelly: I was a political science major at Columbia University while the vigils were at their height. I commuted to Columbia from my home in Bayside Hills, so I was often present when the vigils were conducted. One of my academic interests was participation by the citizenry in community affairs. I remember reading The Semi-Sovereign People by E. E. Schattschneider and Who Governs? by Robert Dahl. Today, Robert Putnam’s Bowling Alone would be relevant to this area of study. I thought the battle between the BHCA and Lueken’s group provided an excellent case study in community participation. The battle involved neighborhood, political, legal, and religious issues. Unfortunately, my seminar professor did not agree with me and dissuaded me from writing a paper on the vigils. He did not consider the matter worthy of study. Perhaps I did not sell the idea to him adequately. I am delighted that your book finally provides such an exhaustive and well-written treatment of the subject. Your access to the files of the Brooklyn Diocese and Lueken’s group provide perspectives that were not widely known during the vigils.

Joseph P. Laycock: The BHCA said the pilgrims were extremely disruptive. Lueken’s followers claim they were being unfairly persecuted. As an eye-witness, what is your assessment of these claims?

Kevin J. Farrelly: The vigils were extremely disruptive for a quiet residential community such as Bayside Hills. It is not an area like midtown Manhattan where group demonstrations are common. There was also a feeling that Luken’s group was improperly using the grassy malls, which were then maintained by BHCA volunteers. These are not cement traffic islands. They are wide grassy malls that the developer in the 1930s installed on some of the avenues and streets to give Bayside Hills a distinctive appearance. The malls, in fact, belong to the City of New York but the City long ago stopped maintaining them. When the malls became overgrown due to lack of maintenance in the 1960s, the BHCA took on the job of maintaining them, first by volunteers and later by gardeners paid by the BHCA. As a result, residents have always taken great pride in the malls. Since the residents themselves rarely, if ever, congregated on the malls, they resented outsiders who claimed the malls for their own purposes. The vigil people also spilled out onto the avenue and sidewalks. The Bayside Hills residents felt they were being forced to accept a public nuisance and argued that the vigils would not have been permitted on major roads such as Queens Boulevard or the Long Island Expressway.

Joseph P. Laycock: Lueken said that Mary had ordered a “basilica” to be erected at St Robert Bellarmine’s. Can you talk about why the prospect of building a basilica was particularly threatening to the BHCA?

Kevin J. Farrelly: A basilica on the grounds of St. Robert’s would be completely out of character in such a quiet residential community.  Most importantly, it would have been a drastic change for the homeowners who made a decision to invest in that quiet community. Aside from not wanting the crowds, the noise, and the buses on their quiet streets, the residents feared property values would suffer if the vigils were allowed to continue and a basilica was constructed.

Joseph P. Laycock: In 1995, you organized an event to commemorate the twentieth anniversary of the Battle of Bayside.  Can you describe this event and explain why you felt it was important?

Kevin J. Farrelly: In the history of the BHCA, the vigils were one of its most defining moments. It was an issue that caught fire with the residents and caused many of them to come out of their homes and vocally defend their community. In quieter times, it was difficult to motivate residents to actively participate, although the BHCA has always held a strong dues-paying membership (courtesy of the BHCA’s protection and maintenance of the malls). Because I had been an eyewitness to the vigils in the 1970s and the BHCA President some 20 years later, I thought it appropriate to host a retrospective. I invited some of the key participants such as William Caulfield and Donald Kiley to speak. David Oates, an editor of the Queens Tribune, showed a (silent) home movie that had been made during the vigils. Many of the residents who attended the retrospective lived in the Hills during the vigils. Today, there are very few Bayside Hills residents who personally witnessed the vigils.

Joseph P. Laycock: In 1999, the Queens Tribune listed Veronica Lueken as number 17 on a list of worst people ever to have lived in Queens. Can you provide any context as to why Lueken was so reviled in Queens?

Kevin J. Farrelly: Of course, Lueken should not be likened to murderers and rapists. But for the residents of Bayside Hills who lived through the vigils, she will always be thought of as a fraud who tried to make money from the vigils. Furthermore, a majority of Bayside Hills residents in those days were Roman Catholic and members of St. Robert’s Parish. The BHCA’s attorney and three leaders—Al Falloni, Joe Fristachi, and Bill Caulfield—were all Catholic. Once the Church officially disavowed Lueken, the Catholic residents felt justified in seeking an end to the vigils. Of course, many residents were not Catholic and presumably were not influenced by the Church’s position. In your book, you argue that, compared to other persons who claim to have saintly visions, Lueken was not treated fairly by the Church. We will never know how the BHCA would have reacted had the Church sanctioned Lueken’s claims.

Joseph P. Laycock: Veronica Lueken has been variously called a saint, a mentally ill person, and a fraud. What do you think was motivating her to organize these vigils in Bayside Hills?

Kevin J. Farrelly: Most Bayside Hills residents believed Lueken was a fraud who sought fame and fortune. I have no way of assessing her mental capacity. Your book reveals that Lueken and her followers believed the person claiming to be Pope Paul VI was an imposter. Was this because they were irrational or because this wild claim supported their political agenda? One could ask the same question of Americans who continue to insist that President Obama was born outside the United States.

Image Credit: “Our Lady is Raised Up” by Lawrence OP. CC BY-NC-ND 2.0 via Flickr.

Joseph P. Laycock is an Assistant Professor of religious studies at Texas State University. He has published over a dozen peer-reviewed journal articles and is currently working on a project about the moral panic over role-playing games during the 1980s. He is the author of The Seer of Bayside: Veronica Lueken and the Struggle to Define Catholicism.