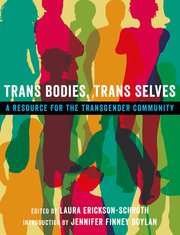 Trans Bodies, Trans Selves: A Resource for the Transgender Community

Trans issues have been in the news lately — from Orange is the New Black to Laverne Cox on the cover of Time— but the trans community has a long history. It’s LGBT History Month in the United Kingdom this month, so we sat down with Trans Bodies, Trans Selves contributor Genny Beemyn to discuss the past and future of transgender culture.

In your opinion, what was the most important moment in history for the transgender community?

It would be easy to say the riots at the Stonewall Inn in New York City in 1969 or the earlier acts of resistance by drag queens at Cooper’s Donuts in Los Angeles in 1959 or Compton’s Cafeteria in San Francisco in 1966. But I will say the development of and growing access to the Internet. The ability to learn about different trans identities and to connect with others like themselves has enabled trans people even in isolated places to better understand their gender identity and have a sense of community.

How has transgender culture changed in recent years?

Well, that there is not one culture. When I came out about 20 years ago, you basically had two options in many transgender communities: to be a crossdresser or transsexual. As I identified as neither but as gender nonconforming, most other trans people I knew, who were older than I was, did not get me. Today, there are countless ways to identify as trans, with new ways being created all the time, mostly by younger trans people. Gender was never a binary, and that has become especially evident in recent years.

How does transgender culture/perception still need to change in the future?

I think the bigger issue is how society, including many primarily lesbian and gay organizations, still has to change to recognize and embrace trans people. Trans people have an incredibly high murder rate—being driven to suicide and being killed by people who hate us because of our gender identities. Yet when it comes to LGBT people, the focus of most of the media and of many gay communities is on same-sex marriage. Many predominantly white trans communities can be faulted is their failure to address racism and classism and to acknowledge race and class privilege. The vast majority of trans people killed in the United States every year are poor trans women of color.

Do you have any advice/resources for those who are new to or simply would like to learn more about the transgender community?

There are many great websites and blogs on Tumblr. For news and information, I particularly like Monica Roberts’ TransGriot. For a trans person who is in crisis, there is a new helpline called Trans Lifeline: 877-565-8860. Beyond the chapter I wrote in Trans Bodies, Trans Selves, I would suggest Susan Stryker’s Transgender History for an overview of trans history.