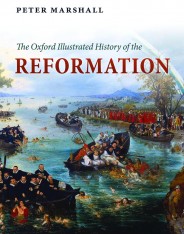 The Oxford Illustrated History of the Reformation

The Reformation was a seismic event in history, whose consequences are still working themselves out in Europe and across the world. The protests against the marketing of indulgences staged by the German monk Martin Luther in 1517 belonged to a long-standing pattern of calls for internal reform and renewal in the Christian Church. But they rapidly took a radical and unexpected turn, engulfing first Germany and then Europe as a whole in furious arguments about how God’s will was to be discerned, and how humans were to be ‘saved’. However, these debates did not remain confined to a narrow sphere of theology. They came to reshape politics and international relations; social, cultural, and artistic developments; relations between the sexes; and the patterns and performances of everyday life.

Below we take a look at some of the key events that shaped the Reformation. In The Oxford Illustrated History of the Reformation Peter Marshall and a team of experts tell the story of how a multitude of rival groups and individuals, with or without the support of political power, strove after visions of ‘reform’.

Peter Marshall is Professor of History at the University of Warwick. He is a specialist in the history of the Reformation, particularly its impact in the British Isles, and has written six books and nearly fifty articles around these themes. He is a winner of the Harold J. Grimm Prize for best article in Reformation History. An editorial board member of Sixteenth Century Journal, he is a co-editor of English Historical Review. He recently edited The Oxford Illustrated History of the Reformation.