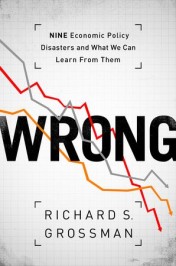 In Wrong, economist Richard Grossman addresses such questions, shining a light on the poor thinking behind nine of the worst economic policy mistakes of the past 200 years, missteps whose outcomes ranged from appalling to tragic. Follow his column on economic policy every month.

Last month, the European Central Bank (ECB) announced its plans to commence a €60 billion (nearly $70 billion) of quantitative easing (QE) through September 2016. In doing so, it is following in the footsteps of American, British, and Japanese central banks all of which have undertaken QE in recent years. Given the ECB’s actions, now is a good time to review quantitative easing. What is it? Why has the ECB decided to adopt this policy now? And what are the likely consequences for Europe and the wider world?

What is quantitative easing (QE)?

Under normal circumstances, central banks undertake monetary policy via open market operations. This typically involves buying (or selling) securities in a short-term money market to lower (or raise) the interest rate prevailing in that market. Central banks are well equipped to do this. They have large inventories of securities that they can easily sell in order withdraw money from the market and push interest rate up. They also have a monopoly on the creation of their particular currency, which they can use to buy securities and push the interest rate down. Open market purchases and sales usually only last for a day or two (through repurchase agreements, or repos), but can be repeated as often as necessary and adjusted in size to achieve the targeted rate.

For an economy that is mired in recession, open market purchases can be a good policy move: buying securities lowers short-term interest rates and increases the money supply. In time, such expansionary monetary policy can also reduce longer-term interest rates, which may stimulate spending on new houses, factories, and equipment, since such investment spending is often made with borrowed money. Expansionary monetary policy will also lead to a decline in the value of the domestic currency on international markets (i.e., depreciation), which will help domestic exports. Too much sustained monetary expansion can lead to inflation, which is one of the main risks of this policy.

In the current economic climate, however, short-term interest rates are already hovering around zero. Although some central banks have flirted with the idea of negative interest rates, there is not much room for conventional expansionary monetary policy to do much good.

Enter quantitative easing. Using quantitative easing, central banks purchase longer-term securities and, unlike open market operations, the purchases are usually permanent instead of for just a few days. This lowers longer-term interest rates. Since individuals and firms that borrow money to invest in homes, factories, and equipment generally do not finance these long-loved assets with overnight borrowing (for mortgages, 15- and 30-year terms are more typical), lowering longer-term interest rates may be a good way to stimulate such long-term investment.

The European economy is listless. GDP appears to have grown—just barely—during the year just finished. Although 2014’s performance was an improvement over 2013’s decline in GDP, the EU’s growth forecasts for 2015 and 2016 are far from rosy. The job market is sluggish: EU-wide unemployment was 11.6% in 2014, down slightly from 12.0% in 2013. And a pick-up in inflation, which should accompany growth, was absent in 2014: the authorities have set a 2.0% for inflation; instead prices rose by an anemic 0.4% in 2014. Several countries have made progress toward much-needed structural reform; however, it is not clear that such reforms alone will get the European economy out of the doldrums anytime soon.

Other dangers facing the European economy also argue in favor of quantitative easing. To the east, tensions with Russia could flare at any time. The terrorist attacks in France have given a boost to right-wing parties throughout Europe, another threat to stability. And the election victory of the anti-austerity Syriza party in Greece, suggests that relations between Greece and the EU are about to get rockier.

What are the consequences?

Quantitative easing will strengthen Europe’s wobbly recovery. The announcement quickly lifted European stock markets—the Euro Stoxx 50-share index rose 1.6% on the news. Lower longer-term interest rates should encourage more borrowing and investment spending. And QE will lead to a continued depreciation in the value of the euro, already at a decade-low against the US dollar, which will make European exports more competitive in world markets. The results will not be so pleasant for American exports, since the euro’s depreciation will cut into recent American export growth, which has benefitted from three rounds of American QE, the last of which ended a few months ago.

Quantitative easing will not sit well with all Euro-zone countries. Germany, which is economically far more robust than its European partners, is not a fan of QE. Memories of a destructive hyperinflation in the 1920s still linger in the national consciousness, lead Germans to be far more skeptical of a potentially inflationary policy that they see as bailing out their more profligate neighbors at their expense.

Finally, the European Central Bank has not said exactly which bonds it will buy. When the US Federal Reserve undertook QE, it had a wide variety of Treasury securities to purchase. Given the high credit-worthiness of the US government and the fact that the market for US Treasury securities is the most liquid market in the world, it was not difficult to find suitable securities to purchase. Will the ECB buy the debt of the fiscally weak euro-zone nations and put their balance sheet at risk? Or will it restrict its purchases to only the most credit worthy countries and risk the ire of the citizens from less well-heeled nations?

Richard S. Grossman is a Professor of Economics at Wesleyan University in Connecticut, USA and a visiting scholar at Harvard University’s Institute for Quantitative Social Science. His most recent book is WRONG: Nine Economic Policy Disasters and What We Can Learn from Them. His homepage is RichardSGrossman.com, he blogs at UnsettledAccount.com, and you can follow him on Twitter at @RSGrossman. You can also read his previous OUPblog posts.