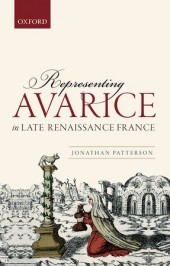 Representing Avarice in Late Renaissance France outlines the moral vocabulary and concepts used to describe avaricious behaviour in late Renaissance France and innovatively shows how the works of well-known authors engaged in productive dialogue with many of their lesser-known contemporaries on problems of avarice.

Greed (avarice, avaritia) has never gone out of fashion. In every age, we find no shortage of candidates for the unenviable epithet, “avaricious.” Nowadays, investment bankers and tax-dodging multinationals head the list. In the past, money-lenders, tax collectors, and lawyers were routinely denounced, although there was a strong feeling that any person, male or female, could succumb to avarice if they did not take the appropriate moral precautions.

The late French Renaissance (c.1540–1615) provides telling evidence of such fears. This period has long been recognised by historians as an era of religious, political, and social turbulence in France. What is less well known is that amid these upheavals, France underwent its first major inflationary crisis. Financial hardship was a biting reality for many – but by no means all. Those who managed to get rich and better themselves without benefitting others were readily condemned as unjust profiteers. In an unruly age, avarice was believed to be everywhere. It was often alleged as the root cause of – or at least partially responsible for – rising prices, the relaxing of usury laws, pillaging during the Wars of Religion, nepotism at the royal court, and venality within the judiciary, Church, and financial institutions. Avarice was the bane of landowners seeking to run their estates fairly and profitably. And whilst it was regularly discussed in daily affairs, it was also recognised and even savoured as a timeless theme of literature and culture. As in the past, the miserly old man and the greedy courtesan made notable appearances in comic theatre and in the gender wars of the querelle des femmes. Yet this was merely the tip of the iceberg: literary engagement with avarice flourished in the late Renaissance across fictional prose narratives, dialogues, poetry, paradoxical encomia, and essays.

To understand the remarkable cultural breadth of avarice in early modern France, one might draw attention to the instrumental significance of the words avarice, avare, and avaricieux in shaping wider debates on gender, enrichment, and status. In recent years, language-based approaches to conceptual history have come into their own – witness the ground-breaking scholarship of Richard Newhauser (on avarice), Neil Kenny (on curiosity), and Richard Scholar (on the je-ne-sais-quoi), whose work has taken forward methodological innovations in the history of ideas stemming from Germanic Begriffsgeschichte as practised by the likes of Reinhart Koselleck. By approaching the subject of avarice through its period vocabulary and concepts, it is possible to engage simultaneously with different intellectual-historical perspectives. The relevance of the Christian tradition condemning idolatrous worship of riches may be ascertained alongside Greco-Roman moral teachings against excessive gain and deficient giving. But what also comes to light – particularly in writings by late Renaissance French jurists – is the odd departure from these traditions, in favour of downplaying the heinousness of avarice within a limited range of circumstances. Rhetorical re-description (as studied by Quentin Skinner) plays an important role here, as does personal experience. The likes of Michel de Montaigne and Antoine Hotman tentatively explored ways in which an avaricious disposition might be downgraded from mortal sin to something less corrosive: legitimate enrichment or prudent withholding of wealth, as exhibited by a bon mesnager (one who is good at “husbanding” or managing his personal resources).

Nevertheless, it is important not to overstate the extent of these daring departures from normative morality in late Renaissance France. In the medium term, stereotypical representations of avarice largely prevailed, as may be judged from Molière’s famous play, L’Avare (1668). If carefully scrutinized, Molière’s depiction of Harpagon in his miserly interactions with others reveals residual traces of late Renaissance discourses on gender, enrichment, and status. Collectively, these traces might be read as a ‘pre-history’ (to adopt Terence Cave’s term) of L’Avare. Yet, critically, one must also recognise that Molière largely bypasses an important mode of Renaissance thinking about avarice: an ability to distinguish extreme, caricatural avares from more ambivalent cases of allegedly greedy behaviour. Such thinking foreshadows – but only faintly – patterns identified by Albert Hirschman in seventeenth- and eighteenth-century thought, whereby avaricious conduct lost its openly sinful edge. No French writer a hundred years earlier would go quite this far.

A final note to those interested in greed from a theological perspective. The position of avarice in intellectual history has frequently been deduced from scholarship on the Seven Deadly Sins (in the medieval period) or on the ‘Protestant Ethic’ (in the early modern period). Intriguingly, neither phenomenon greatly manifests itself in the humanistic texts of the late French Renaissance. Confessional differences in late Renaissance French writing on avarice are only marked in sermons and moral treatises. Yet much theological common ground may be identified here, whereas traces of the medieval heptad are scant (even in Catholic sources). If Catholics and Protestants saw greed in the other – and they certainly did – they also spoke through the same biblical commonplaces to denounce the wider social damage and moral corruption attributed to l’avarice, the common enemy of peace and godly prosperity. In the twentieth century it became academic orthodoxy to restate Max Weber’s views that the Protestant tradition eventually legitimated material prosperity to the point of moral leniency towards an overtly money-making disposition formerly denounced as avarice. Yet in the French Renaissance, at least, there are few indicators to uphold such a theory rigorously. Regarding the French context, one should note, therefore, that those who went furthest from traditional views on avarice – namely Antoine Hotman and Michel de Montaigne – were Catholics, not Protestants. In light of these findings, it is worth reiterating the need for caution when reflecting on the history of avarice vis-à-vis theological identity and social practice.

Jonathan Patterson is a British Academy Post-doctoral Fellow in French at the University of Oxford. He is the author of Representing Avarice in Late Renaissance France.