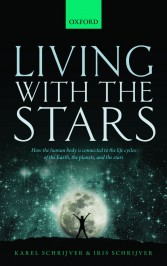 Living with the Stars

Although we rarely stop to think about the origin of the elements of our bodies, we are directly connected to the greater universe. In fact, we are literally made of stardust that was liberated from the interiors of dying stars in gigantic explosions, and then collected to form our Earth as the solar system took shape some 4.5 billion years ago. Until about two decades ago, however, we knew only of our own planetary system so that it was hard to know for certain how planets formed, and what the history of the matter in our bodies was.

Then, in 1995, the first planet to orbit a distant Sun-like star was discovered. In the 20 years since then, thousands of others have been found. Most planets cannot be detected with our present-day technologies, but estimates based on those that we have observed suggest that almost every star in the sky has at least one extrasolar planet (or exoplanet) orbiting it. That means that there are more than 100 billion planetary systems in our Milky Way Galaxy alone! Imagine that: astronomers have gone from knowing of 1 planetary system to some 100 billion, in the same decades in which human genome scientists sequenced the 6 billion base-pairs that lie at the foundation of our bodies. How many of these planetary systems could potentially support life, and would that life use a similar code?

Exoplanets are much too far away to be actually imaged, and they are way too faint to be directly observed next to the bright glow of the stars they orbit. Therefore, the first exoplanet discoveries were made through the gravitational tug on their central star during their orbits. This pull moves the star slightly back and forth. Only relatively heavy, close-in planets can be detected that way, using the repeating Doppler shifts of their central star’s light from red to blue and back. Another way to find planets is to measure how they block the light of their central star if they happen to cross in front of it as seen from Earth. If they are seen to do this twice or more, the temporary dimmings of their star’s light can disclose the planet’s size and distance to its star (basically using the local “year” – the time needed to orbit its star – for these calculations).  If both the gravitational tug and the dimming profile can be measured, then even the mass of the planet can be estimated. Size and mass together give an average density from which, in turn, knowledge of the chemical composition of that planet comes within reach.

With the discoveries of so many planets, we have realized that an astonishing diversity exists: hot Jupiter-sized planets that orbit closer to their star than Mercury orbits the Sun, quasi-Earth-sized planets that may have rain showers of molten iron or glass, frozen planets around faintly-glowing red dwarf stars, and possibly some billions of Earth-sized planets at distances from their host stars where liquid water could exist on the surface, possibly supporting life in a form that we might recognize if we saw it.

Guided by these recent observations, mega-computers programmed with the laws of physics give us insight into how these exo-worlds are formed, from their initial dusty disks to the eventual complement of star-orbiting planets. We can image the disks directly by focusing on the faint infrared glow of their gas and dust that is warmed by their proximity to their star. We cannot, however, directly see these far-away planets, at least not yet. But now, for the first time, we can at least see what forming planets do to the gas and dust around them in the process of becoming a mature heavenly body.

A new observatory, called ALMA, working with microwaves that lie even beyond the infrared color range, has been built in the dry Atacama desert in Chili. ALMA was pointed at a young star, hundreds of light years away. Its image of that target star, LH Tauri, not only shows the star itself and the disk around it, but also a series of dark rings that are most likely created as the newly forming planets pull in the gas and dust around them. The image is of stunning quality: it shows details down to a resolution equivalent to the width of a finger seen at a distance of 50 km (30 miles).

At the distance of LH Tauri, even that stunning imaging capability means that we can see structures only if these are larger than about the distance of the Sun out to Jupiter, so there is a long way yet to go before we see anything like the planet directly. But we will observe more of these juvenile planetary systems just past the phase of their birth. And images like that give us a glimpse of what happened in our own planetary system over 4.5 billion years ago, before the planets were fully formed, pulling in the gases and dust that we now live on, and that ultimately made their way to the cycles of our own planet, to constitute all living beings on Earth.

What a stunning revolution: from being part of the only planetary system we knew of, we have been put among billions and billions of neighbors. We remember Galileo Galilei for showing us that the Sun and not the Earth was the center of the solar system. Will our society remember the names of those who proved that billions of planets exist all over the Galaxy?

Karel Schrijver and Iris Schrijver are the authors of Living with the Stars: How the Human Body is Connected to the Life Cycles of the Earth, the Planets, and the Stars.

Karel Schrijver is an astronomer who studies magnetic fields of stars of all ages, in particular the magnetism of the star central to our own planetary system: the Sun.  He observes the effects of the Sun’s magnetism in the ever-changing solar atmosphere using space-based observatories, and follows those effects from the Sun to the planets around it where they result in what is known as space weather.

Iris Schrijver is a physician and professor of Pathology and Pediatrics at Stanford University, where she directs the diagnostic Molecular Pathology laboratory and provides patient care by diagnosing inherited conditions and by diagnosing and following therapy responses of cancer-related changes in the DNA.