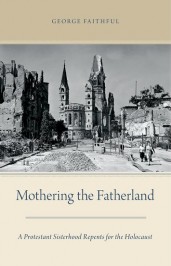 Mothering the Fatherland: A Protestant Sisterhood Repents for the Holocaust

Not long after the beginning, Genesis tells us that there were two brothers. One killed the other. “And the Lord said, ‘What have you done? Listen; your brother’s blood is crying out to me from the ground’” (Gen. 4:10). This is the Lord’s response when the murderer denies knowing where his brother is and asks, “Am I my brother’s keeper?” We humans are our brothers’ and sisters’ keepers; and yet we have been disowning and killing each other since the beginning.

On this day seventy years ago, the last prisoners were liberated from Auschwitz. On this day today, we commit to remembering the more than six million Jews, Gypsies, homosexuals, and others who were rejected and murdered by their fellow humans. Their blood still cries out to God from the ground.

When we remember the Shoah, always but especially on this day, we must focus our energies on remembering those who we have lost. Those who murdered them dehumanized them. Let us defy that curse and celebrate their thoughts, beliefs, feelings, and experiences – the fullness of their humanity.

Let us sit in the memory of those who we have lost. Those of us without memories of our own must humbly seek welcome in the memories of others, to the extent that they are knowable. When we cannot know what the people who perished were like, let us grow in our awareness of our ignorance. We can never fully understand what we have lost. Let us mourn both what we know and what we know we cannot know.

The words of the victims themselves offer the clearest hope of seeing and remembering through their eyes, of knowing what the Shoah was and what it destroyed, even as it defies human comprehension. In 1947, writing from Sweden, poet, refugee, and future Nobel laureate Nelly Sachs offered words of caution to her fellow humans: “We the rescued beg you: Show us your sun slowly. Lead us step by step from star to star. Let us quietly learn to live again. Otherwise the song of a bird or the filling of a bucket at a well could unleash our ill-sealed ache and wash us away.”

There is beauty in the world. There is hope. There is joy to be found in the midst of the ordinary. But there is also great darkness within those around us and even, at times, within ourselves. We have killed our brothers and sisters since the beginning of humanity, it seems. We are each other’s keepers. We learn to keep each other in the present, in part, by keeping the memories alive of  those who have gone before, especially of those who were the victims of immeasurable evil.

This remembering can be no mere intellectual exercise of memorizing facts and figures. As heirs of the memories of the victims, we must take their legacy personally. Some felt anger and indignation, a few even hate, but for many the overwhelming response was one of sorrow. Entire communities, villages, towns, families, clans, cultures, and sub-cultures that once thrived are now gone.

The Talmud teaches that “anyone who destroys a life is considered by Scripture to have destroyed an entire world” (Mishnah Sanhedrin 4:9). In the Shoah, more than six million worlds were wiped out. Let us mourn their loss. Let us seek to remember. Their blood still cries out to God. Let us listen.

George Faithful is the author of Mothering the Fatherland: A Protestant Sisterhood Repents for the Holocaust. After studying at Wake Forest University, l’Université de Nantes, and the Humboldt-Universität zu Berlin, he completed a Ph.D. in historical theology at Saint Louis University. He serves as a post-doctoral teaching fellow in the Department of the Core at Seton Hall University in South Orange, New Jersey. His blog explores pressing issues in the humanities and education.

The Holocaust and the illusions of hindsight