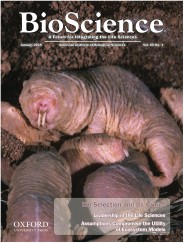 Since 1964, BioScience has presented readers with timely and authoritative overviews of current research in biology, accompanied by essays and discussion sections on education, public policy, history, and the conceptual underpinnings of the biological sciences.

I recall a dinner conversation at a symposium in Paris that I organized in 2010, where a number of eminent evolutionary biologists, economists and philosophers were present. One of the economists asked the biologists why it was that whenever the topic of “group selection” was brought up, a ferocious argument always seemed to ensue. The biologists pondered the question. Three hours later the conversation was still stuck on group selection, and a ferocious argument was underway.

Group selection refers to the idea that natural selection sometimes acts on whole groups of organisms, favoring some groups over others, leading to the evolution of traits that are group-advantageous. This contrasts with the traditional ‘individualist’ view which holds that Darwinian selection usually occurs at the individual level, favoring some individual organisms over others, and leading to the evolution of traits that benefit individuals themselves. Thus, for example, the polar bear’s white coat is an adaptation that evolved to benefit individual polar bears, not the groups to which they belong.

The debate over group selection has raged for a long time in biology. Darwin himself primarily invoked selection at the individual level, for he was convinced that most features of the plants and animals he studied had evolved to benefit the individual plant or animal. But he did briefly toy with group selection in his discussion of social insect colonies, which often function as highly cohesive units, and also in his discussion of how self-sacrificial (‘altruistic’) behaviours might have evolved in early hominids.

In the 1960s and 1970s, the group selection hypothesis was heavily critiqued by authors such as G.C. Williams, John Maynard Smith, and Richard Dawkins. They argued that group selection was an inherently weak evolutionary mechanism, and not needed to explain the data anyway. Examples of altruism, in which an individual performs an action that is costly to itself but benefits others (e.g. fighting an intruder), are better explained by kin selection, they argued. Kin selection arises because relatives share genes. A gene which causes an individual to behave altruistically towards its relatives will often be favoured by natural selection—since these relatives have a better than random chance of also carrying the gene. This simple piece of logic tallies with the fact that empirically, altruistic behaviours in nature tend to be kin-directed.

Strangely, the group selection controversy seems to re-emerge anew every generation. Most recently, Harvard’s E.O. Wilson, the “father of sociobiology” and a world-expert on ant colonies, has argued that “multi-level selection”—essentially a modern version of group selection—is the best way to understand social evolution. In his earlier work, Wilson was a staunch defender of kin selection, but no longer; he has recently penned sharp critiques of the reigning kin selection orthodoxy, both alone and in a 2010 Nature article co-authored with Martin Nowak and Corina Tarnita. Wilson’s volte-face has led him to clash swords with Richard Dawkins, who says that Wilson is “just wrong” about kin selection and that his most recent book contains “pervasive theoretical errors.” Both parties point to eminent scientists who support their view.

What explains the persistence of the controversy over group and kin selection? Usually in science, one expects to see controversies resolved by the accumulation of empirical data. That is how the “scientific method” is meant to work, and often does. But the group selection controversy does not seem amenable to a straightforward empirical resolution; indeed, it is unclear whether there are any empirical disagreements at all between the opposing parties. Partly for this reason, the controversy has sometimes been dismissed as “semantic,” but this is too quick. There have been semantic disagreements, in particular over what constitutes a “group,” but this is not the whole story. For underlying the debate are deep issues to do with causality, a notoriously problematic concept, and one which quickly lands one in philosophical hot water.

All parties agree that differential group success is common in nature. Dawkins uses the example of red squirrels being outcompeted by grey squirrels. However, as he notes, intuitively this is not a case of genuine group selection, as the success of one group and the decline of another was a side-effect of individual level selection. More generally, there may be a correlation between some group feature and the group’s biological success (or “fitness”); but like any correlation, this need not mean that the former has a direct causal impact on the latter. But how are we to distinguish, even in theory, between cases where the group feature does causally influence the group’s success, so “real” group selection occurs, and cases where the correlation between group feature and group success is “caused from below”? This distinction is crucial; however it cannot even be expressed in terms of the standard formalisms that biologists use to describe the evolutionary process, as these are statistical not causal. The distinction is related to the more general question of how to understand causality in hierarchical systems that has long troubled philosophers of science.

Recently, a number of authors have argued that the opposition between kin and multi-level (or group) selection is misconceived, on the grounds that the two are actually equivalent—a suggestion first broached by W.D. Hamilton as early as 1975. Proponents of this view argue that kin and multi-level selection are simply alternative mathematical frameworks for describing a single evolutionary process, so the choice between them is one of convention not empirical fact. This view has much to recommend it, and offers a potential way out of the Wilson/Dawkins impasse (for it implies that they are both wrong). However, the equivalence in question is a formal equivalence only. A correct expression for evolutionary change can usually be derived using either the kin or multi-level selection frameworks, but it does not follow that they constitute equally good causal descriptions of the evolutionary process.

This suggests that the persistence of the group selection controversy can in part be attributed to the mismatch between the scientific explanations that evolutionary biologists want to give, which are causal, and the formalisms they use to describe evolution, which are usually statistical. To make progress, it is essential to attend carefully to the subtleties of the relation between statistics and causality.

Image Credit: “Selection from Birds and Animals of the United States,” via the Smithsonian American Art Museum.

Samir Okasha is Professor of Philosophy of Science at the University of Bristol, and co-author of "Kin Selection and its Critics" (BioScience, 65.1). He is the author of numerous articles and two OUP books: Philosophy of Science: A Very Short Introduction and Evolution and the Levels of Selection, which was awarded the 2009 Lakatos Prize for an outstanding contribution to the philosophy of science.