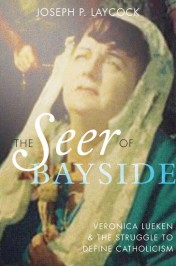 The Seer of Bayside: Veronica Lueken and the Struggle to Define Catholicism

From 5-19 October 2014, Pope Francis held the Extraordinary Synod of Bishops on the Family in Rome. The purpose of the synod was to discuss the Church’s stance on such issues as divorce, birth control, and especially, the legalization of gay marriage. On 13 October, the Synod released a relatio (a mid-term report) on its preliminary findings. Paragraph 50 of the relatio stated:

Homosexuals have gifts and qualities to offer to the Christian community. Are we capable of providing for these people, guaranteeing them a place of fellowship in our communities? Oftentimes, they want to encounter a Church which offers them a welcoming home. Are our communities capable of this, accepting and valuing their sexual orientation, without compromising Catholic doctrine on the family and matrimony?

Even though the paragraph was phrased more as a question than a statement, it was immediately pronounced an “earthquake” in the history of Catholicism. Apparent sympathy toward homosexuals delighted liberal Catholics while horrifying conservatives and traditionalists. When the synod concluded, this language was removed from the final version of the document, having failed to acquire a necessary two-thirds vote from participants.

Although the Mother Church has always held synods and councils to reassess doctrines and practices, it presents itself as timeless and immutable. In the nineteenth century American bishop John Ireland mused, “The church never changes and yet she changes.” When change does occur (or is even suggested), conservatives often respond with horror. The paradox of an unchangeable, changing Church creates what sociologist Peter Berger calls a grenzsituation (drawing on the work of psychologist Karl Jaspers), in which a taken for granted reality suddenly appears alien and factitious. To articulate their feeling of betrayal, critics of Church Reform frequently invoke the language of evil and the demonic.

Following the “earthquake” of 13 October, those opposed to the relatio used a variety of strategies to express their dissent including legalistic arguments, suggestions that devil was confusing the synod, hints of conspiracy, and even snippets of prophecy delivered by Marian seers at Fatima and other apparition sites. This response demonstrated the same constellation of forces that occurred in the aftermath of Vatican II when traditionalist Catholics turned to a homemaker from Queens who claimed to see visions of the Virgin Mary. Veronica Lueken, “The Seer of Bayside,” was declared “the seer of age” primarily because her prophecies offered a framework by which traditionalists could make sense of the radical changes of Vatican II. Lueken’s most controversial revelation was that Paul VI––the pope who approved the Council’s reforms––had been replaced by a Soviet doppelganger. Accordingly, loyal Catholics were justified in rejecting Vatican II because it was, in reality, the product of a demonic conspiracy unfolding in the final days.

Today, as in the 1970s, conservative Catholics express pain and outrage that a pope would challenge their understanding of what it means to be Catholic. Some have presented legalistic arguments, citing such documents as a 1986 letter from the Congregation for the Doctrine of Faith that described homosexuality as “an objective disorder.” But repeatedly, conservatives have articulated their dissent by invoking a dark triad of demonology, conspiracy theory, and millennial prophecy.

On 20 October, Archbishop Charles Chaput gave a talk entitled “Stranger in a Strange Land,” in which he suggested that Catholics were now the targets of intolerance for advocating traditional family values. When asked about the synod, Chaput first specified that he had not been there and that the media might be distorting what was actually said. He then added, “I think confusion is of the devil, and I think the public image that came across was one of confusion.”

In the Catholic magazine First Things, Peter Leithart discussed the synod in terms of spiritual warfare, suggesting that advocates of gay marriage are the victims of demonic deception. He explained, “When Christians see something that looks like a collective delusion, they’re looking at demonic deception and/or divine judgment. We live in a culture that has venerated idol-ologies of unbounded freedom with relentless zeal, and God has given us over to the logic of our folly.”

Others invoked the language of willful betrayal and conspiracy, rather than demonically-inspired confusion. John Smeaton, co-founder of Voice of the Family, commented, “Those who are controlling the Synod have betrayed Catholic parents worldwide. We believe that the Synod’s mid-way report is one of the worst official documents drafted in Church history.” In this assessment, it is not the synod itself that has betrayed Catholic families, but by a shadowy “them” who are controlling it.

Outside the sphere of mainstream discourse, traditionalist groups have been much more explicit in framing the synod in terms of an apocalyptic war with Satan. Lueken died in 1995, but her followers, known as “Baysiders,” strongly opposed the 13 October announcement. These Last Days Ministries, a Baysider, website, prefaced a report on the relatio with a prophecy delivered by Lueken on behalf of Jesus on 3 May 1978:

The Eternal Father has given mankind a set of rules, and in discipline they must be obeyed. It behooves Me to say that My heart is torn by the actions, the despicable actions, of My clergy. I unite, as your God, man and woman into the holy state of matrimony. And what I have bound together no man must place asunder. And what do I see but broken homes, marriages dissolved through annulments! It has scandalized your nation, and it is scandalizing the world. Woe to the teachers and leaders who scandalize the sheep!”

A Catholic author named Kelly Bowring even speculated that the relatio signaled a the beginning of an prophesied end times scenario, writing:

Will today be remembered as the first day that led to the Church’s prophesied schism? Quite likely yes. By many accounts people are waking up to see that the Family Synod of October 2014 is an officially Vatican-orchestrated work of manipulation. The mid-way report was released October 13th, a day of great spiritual significance.

Like many apocalyptic Marian groups, Bowring has located the relatio within a “theology of history” by finding other significant dates that also occurred on 13 October. On 13 October 1884, Pope Leo XIII composed the prayer to Saint Michael. According to Catholic legend, he did so after a mystical experience in which he overheard a conversation between God and Satan in which Satan was given “time and power” so that he could attempt to overthrow the Church. The “Miracle of the Sun” in Fatima, Portugal occurred on 13 October 1917. The Marian apparitions at Fatima were the most significant in modern history and the three “secrets of Fatima” delivered by the child seers remain the object of intense speculation among traditionalist Catholics. Finally, on 13 October 1973, Sister Agnes Katsuko Sasagawa, a Marian seer near Akita, Japan, delivered a prophecy of a great schism that would destroy the Church. By forming these connections, Bowring can locate new developments like the relatio within a cosmic scheme of history.

These responses––from off-the-cuff remarks equating confusion with the devil, to intricate webs of numerical correspondences––can be read as attempts to make sense of what previously seemed unthinkable. For some, it is easy to dismiss such language as hysterical or even evidence of mental illness. But demonology, conspiracy, and millennial prophecies are all interpretive tools that can be brought to bear in times of crisis. For lay Catholics who feel helpless and betrayed as strangers in Rome attempt to shift the core values of their tradition, these are also discourses of resistance.

Critics of Veronica Lueken claimed she was either mad or a con artist. (One reporter even suggested that her visions were a side effect of diet pills.) But if we examine Catholic tradition as an asymmetric collaboration between lay Catholics and Church authorities, figures like Veronica Lueken are easier to understand. Marian seers do not simply pop up fully formed. Instead events like Church reform create an alignment of social forces in which seers arise. The relationship that forms between seers and their followers creates a charismatic authority that––in some cases––can rival the authority of the Catholic hierarchy. For this reason, it seems likely that as Pope Francis continues to voice his preference for social justice rather than tradition, we can expect a backlash that imbues reform with dark and apocalyptic significance. Like Paul VI, Francis will likely be a pope who gives rise to seers.

Joseph P. Laycock is an assistant professor of religious studies at Texas State University. He has published over a dozen peer-reviewed journal articles and is currently working on a project about the moral panic over role-playing games during the 1980s. He is the author of The Seer of Bayside: Veronica Lueken and the Struggle to Define Catholicism.