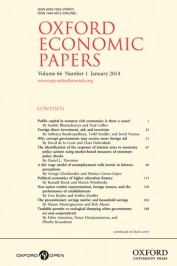 Nomadic conquests have helped shape world history. We may indulge ourselves for a moment to imagine the following counterfactuals: What if Western Europe did not fall to seminomadic Germanic tribes, or Western Europe was conquered by the Huns, Arabs, or Mongols, or Kievan Rus did not succumb to Mongolian invaders, or Ming China did not give way to the Manchu Qing? For centuries, the mere mention of the names of Attila, Genghis Khan, or Tamerlane could strike terror into men and women throughout Eurasia.

Historical China (from 221 BCE – 1911) provides an interesting case for studying the determinants of nomadic conquests: Sino-nomadic conflict endured for over two millennia – not least because the Chinese people are known for their obsession with meticulous recording of historical events, including droughts, floods, snow, frost and low-temperature disasters.

However, climate change by itself is not the only driver of nomadic conquests. First, there is the question of why China was conquered by some nomadic regimes but not others, when these regimes were subjected to the same climate shocks; for example, why was the Northern Song dynasty (960-1127) conquered by the Jin (Jurchens), but not the Liao (Khitan) or the Western Xia (Xianbei), all of which coexisted for some period of time. Second, the frequency and the outcomes of nomadic attacks varied; the outcomes of attacks also depended on the relative strengths of nomadic and sedentary peoples, which are linked to their relative positions in dynastic cycles.

The dynastic cycle hypothesis proposes that all historical regimes had life cycles that included rises and falls, and passed through inevitable stages of growth, maturity and decline. Usually, a dynasty reached its height of power during and shortly after the reign of its founder. As time passed, vested interests became increasingly entrenched, with the ruling class growing ever more corrupt and inefficient, inevitably diminishing the dynasty’s political and military power. An implication of the dynastic cycle hypothesis is that if a Chinese dynasty was established much earlier than a competing nomadic regime, then China faced an awkward situation in which an aging Chinese dynasty was confronted by a rising nomadic regime, resulting in heightened risk of China being conquered.

The main conclusions of this study are twofold. First, consistent with the dynastic cycle hypothesis, the likelihood of China being conquered was significantly and positively related to how long a Chinese dynasty existed relative to its nomadic rival. To a degree, whether a Chinese dynasty was conquered by a nomadic regime depended on a timing mismatch between the Chinese dynasty and its nomadic counterpart. That is, a growing new Chinese dynasty could usually defend itself, whereas an aging Chinese dynasty often could not resist a rising nomadic power. Second, climate shocks played a significant role in nomadic conquests, as the likelihood of conquest increased with less rainfall as proxied by drought disasters. These results contribute to our understanding of the perennial conflict between settled and nomadic peoples in ancient China and throughout world history.

Nomadic conquests did not just happen by chance – there were systematic forces at work, such as climate shocks and dynastic cycles.