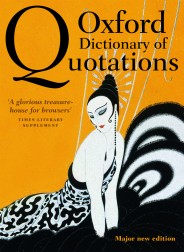 Winter encourages a certain kind of idiosyncratic imagery not found during any other season: white, powdery snow, puffs of warm breath, be-scarfed holiday crowds. The following slideshow presents a lovely compilation of quotes from the eighth edition of our Oxford Dictionary of Quotations that will inspire a newfound love for winter, whether you’ve ever experienced snow or not!

Are there any other wintry quotes that you love? Let us know in the comments below.

The eighth edition of the Oxford Dictionary of Quotations is edited by Elizabeth Knowles and includes over 20,000 quotations for all occasions covering over 3,700 authors, from Ancient Egypt to the 21st century.

Connie Ngo is a Marketing Assistant at Oxford University Press.