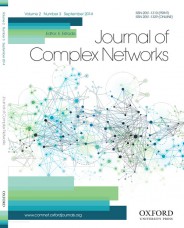 The Journal of Complex Networks publishes original articles and reviews with a significant contribution to the analysis and understanding of complex networks and its applications in diverse fields. The journal covers everything from the basic mathematical, physical and computational principles needed for studying complex networks to their applications leading to predictive models in molecular, biological, ecological, informational, engineering, social, technological and other systems.

Are you worried about catching the flu, or perhaps even Ebola? Just how worried should you be? Well, that depends on how fast a disease will spread over social and transportation networks, so it’s obviously important to obtain good estimates of the speed of disease transmission and to figure out good containment strategies to combat disease spread.

Diseases, rumors, memes, and other information all spread over networks. A lot of research has explored the effects of network structure on such spreading. Unfortunately, most of this research has a major issue: it considers networks that are not realistic enough, and this can lead to incorrect predictions of transmission speeds, which people are most important in a network, and so on. So how does one address this problem?

Traditionally, most studies of propagation on networks assume a very simple network structure that is static and only includes one type of connection between people. By contrast, real networks change in time — one contacts different people during weekdays and on weekends, one (hopefully) stays home when one is sick, new University students arrive from all parts of the world every autumn to settle into new cities. They also include multiple types of social ties (Facebook, Twitter, and – gasp – even face-to-face friendships), multiple modes of transportation, and so on. That is, we consume and communicate information through all sorts of channels. To consider a network with only one type of social tie ignores these facts and can potentially lead to incorrect predictions of which memes go viral and how fast information spreads. It also fails to allow differentiation between people who are important in one medium from people who are important in a different medium (or across multiple media). In fact, most real networks include a far richer “multilayer” structure. Collapsing such structures to obtain and then study a simpler network representation can yield incorrect answers for how fast diseases or ideas spread, the robustness level of infrastructures, how long it takes for interacting oscillators to synchronize, and more.

Recently, an increasingly large number of researchers are studying mathematical objects called “multilayer networks”. These generalize ordinary networks and allow one to incorporate time-dependence, multiple modes of connection, and other complexities. Work on multilayer networks dates back many decades in fields like sociology and engineering, and of course it is well-known that networks don’t exist in isolation but rather are coupled to other networks. The last few years have seen a rapid explosion of new theoretical tools to study multilayer networks.

And what types of things do researchers need to figure out? For one thing, it is known that multilayer structures induce correlations that are invisible if one collapses multilayer networks into simpler representations, so it is essential to figure out when and by how much such correlations increase or decrease the propagation of diseases and information, how they change the ability of oscillators to synchronize, and so on. From the standpoint of theory, it is necessary to develop better methods to measure multilayer structures, as a large majority of the tools that have been used thus far to study multilayer networks are mostly just more complicated versions of existing diagnostic and models. We need to do better. It is also necessary to systematically examine the effects of multilayer structures, such as correlations between different layers (e.g., perhaps a person who is important for the social network that is encapsulated in one layer also tends to be important in other layers?), on different types of dynamical processes. In these efforts, it is crucial to consider not only simplistic (“toy”) models — as in most of the work on multilayer networks thus far — but to move the field towards the examination of ever more realistic and diverse models and to estimate the parameters of these models from empirical data. As our review article illustrates, multilayer networks are both exciting and important to study, but the increasingly large community that is studying them still has a long way to go. We hope that our article will help steer these efforts, which promise to be very fruitful.

Mason A. Porter is Professor of Nonlinear and Complex Systems in the Mathematical Institute at University of Oxford, and he is a Tutorial Fellow in Somerville College. He earned a BS in applied mathematics from Caltech in 1998 and a PhD from Cornell University's Center for Applied Mathematics in 2002.  He then had postdoctoral positions at Georgia Tech (in mathematics), the Mathematical Sciences Research Institute (MSRI) in Berkeley, and Caltech (in condensed-matter physics) before joining the faculty of University of Oxford in fall 2007. Mason's research interests span far and wide in networks, nonlinear dynamics, and complex systems.  He won the Erdős-Rényi prize in Network Science in 2014 and is on the editorial boards of six journals (including SIAM Review, Journal of Complex Networks, and Transactions on Network Science and Engineering). You can read Mason Porter's blog, and follow him on Twitter.