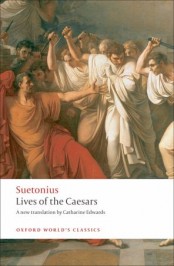 Lives of the Caesars

In AD 14, two thousand years ago this summer, the emperor Augustus, having dominated Rome for over forty years, finally breathed his last. The new emperor was his step-son Tiberius. While Augustus’ achievement in ending civil war and discreetly transforming a republic into one-man rule provokes grudging admiration even from those who aren’t keen on autocracy, Tiberius has very few fans. Suetonius’ biography, the third in his twelve Lives of the Caesars, offers some intriguing insights into why this might be.

Descended from one of Rome’s most noble families, Tiberius, in his mid-50s when he came to power, had led a series of enormously successful, if unshowy, military campaigns, securing Pannonia (roughly modern Hungary) in the east and doing much to stabilize the troublesome area around the Rhine in the north. He loved literature, philosophy, and art. He was just the kind of man who had dominated the senior echelons of the senate under the republic – a very traditional kind of Roman leader, it might seem.

But among ancient commentators only Velleius Paterculus, who wrote during his reign, has much good to say. Suetonius, in his biography, and Tacitus, in his Annals, offer a litany of damning criticisms. Tiberius, himself a great respecter of tradition, a stickler for proper procedure, seems to have found his position – as not quite fully acknowledged autocrat, expected to exercise personal dominance through what purported to be the old republican framework – deeply uncomfortable. Unlike Augustus, he had no desire whatsoever to develop a warm relationship with the common people of Rome. (Suetonius makes clear his total lack of interest in the games – a telling indicator.) No money was spent on public works. He veered between insisting the Senate behave independently and dropping cryptic hints as to how he wanted it to vote. Yet his chief crime, in the eyes of some ancient critics, was deserting Rome.

In 26 AD, twelve years into his reign, Tiberius withdrew to the island of Capri, never to return to the city. Was this meant to look like a return to senatorial government? For the next eleven years, imperial control was exercised remotely, for the most part through Sejanus, prefect of the praetorian guard. Among the many prominent Romans convicted of treason in those years were members of Tiberius’ own family, including the widow and two elder sons of his nephew Germanicus. Eventually Sejanus, too, ended up a corpse in the Tiber, taking with him as he fell many who had hoped to profit by associating with the emperor’s henchman. This bloodbath reflects Tiberius’ innate cruelty, as well as his insecurity – but Suetonius highlights other vices, too.

His biography begins with some family history – a mixed bag of earlier Claudians, male and female, some famous for their virtue, others notorious for their arrogance and depravity. Suetonius then charts Tiberius’ early life, his distinguished military career, his accession and the largely positive measures he undertook in the early years of his reign. But chapter 33 hints darkly at the character assassination, which is to follow: ‘He showed only gradually what kind of emperor he was’. This move prefigures the comments Suetonius makes in his Lives of Caligula (ch.22: ‘The story so far has been of Caligula the emperor, the rest must be of Caligula the monster’) and Nero (the end of ch.19 prepares the reader for ‘the shameful deeds and crimes with which I shall henceforth be concerned’). For Suetonius, character, though it may be temporarily masked, is not subject to change or development.

Suetonius does note that Tiberius’ withdrawal meant provincial government was neglected but stories of the emperor’s depravity get much more attention. Once on Capri, Tiberius ‘finally gave in to all the vices he had struggled so long to conceal’. His drinking was legendary, his sex life exceeded the worst imaginings. Surrounded by sexually explicit art-works, Tiberius was addicted to every kind of perversion, with boys, girls – even tiny children. The accusations relating to oral sex would have aroused particular loathing on the part of Roman readers. Tiberius’ appetites were hardly human; ‘people talked of the old goat’s den – making a play on the name of the island’. What did Tiberius really get up to? Stories of this kind were part of the common currency of Roman political discourse. Suetonius devotes similar space to the sexual transgressions of Caligula, Nero, and Domitian – such behaviour is to be expected of a tyrant. The remoteness of the emperor’s residence itself must have fuelled the most lurid imaginations back in Rome. Emblematic of Tiberius’ impossible position is his relationship with his mother Livia. Had she not been Augustus’ wife of many decades, Tiberius would never have succeeded to power. Suetonius repeatedly underlines Livia’s key role in promoting her son. She persuaded Augustus to adopt him, following the deaths of his two adult grandsons. She helped to ensure a rival candidate was eliminated. Even after Tiberius succeeded to Augustus, Livia remained a force to be reckoned with: ‘he was angered by his mother Livia on the grounds that she claimed an equal share in his power’. Yet we should perhaps be just as wary with regard to these stories as with those about Tiberius’ sexual tastes. What better way for Tiberius’ critics to undermine him than to allege this experienced military man in late middle age needed advice from his mother? Such claims would perhaps have been especially offensive to someone of Tiberius’ ultra-traditional outlook. The senators who proposed to honour him with the title ‘Son of Livia’ knew how to torment the emperor. Indeed Suetonius reports stories that the main reason Tiberius left Rome for Capri was to get away from his mother.

Catharine Edwards teaches Classics and Ancient History at Birkbeck, University of London. She translated Suetonius's Lives of the Caesars for Oxford World’s Classics. Her other books include The politics of immorality in ancient Rome, Writing Rome and Death in ancient Rome. She is a frequent contributor to BBC Radio 4’s In our time and presented the BBC4 series ‘Mothers, murderers and mistresses: empresses of ancient Rome’. You can follow her at @CatharineEdwa.