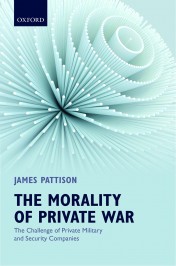 The Morality of Private War: The Challenge of Private Military and Security Companies

In July 2014, the Ukrainian President, Petro Poroshenko, claimed that Ukraine wasn’t fighting a civil war in the east of the country but rather was “defending its territory from foreign mercenaries.” Conversely, rumours abounded earlier in the year that Academi, the firm formerly known as Blackwater, were operating in support of the Ukrainian government (which Academi strongly denied). What is interesting is not simply whether these claims are true, but also their rhetorical force. Being a mercenary and using mercenaries is seen as one of the worst moral failings in a conflict.

Regardless of the accuracy of the claims and counterclaims about their use in Ukraine, the increased use of mercenaries or ‘private military and security companies’ is one of the most significant transformations of military force in recent times. In short, states now rely heavily on private military and security companies to wage wars. In the First Gulf War, there was a ratio of roughly one contractor to every 100 soldiers; by 2008 in the Second Gulf War, that ratio had risen to roughly one to one. In Afghanistan, the ratio was even higher, peaking at 1.6 US-employed contractors per soldier. The total number of Department of Defense contractors (including logistical contractors) reached approximately 163,000 in Iraq in September 2008 and approximately 117,000 in Afghanistan in March 2012. A lot of the media attention surrounding the use of private military and security companies has been on the use of armed foreign contractors in conflict zones, such as Blackwater in Iraq. But the vast majority of the industry provides much more mundane logistical services, such as cleaning and providing food for regular soldiers.

But what, if anything, is morally wrong with being a mercenary or a private contractor? Could one be an ethical mercenary? In short, yes. To see this, suppose that you go to fight for a state that is trying to defend itself against attack from a genocidal rebel group, which is intent on killing thousands of innocent civilians. You get paid handsomely for this, but this is not the reason why you agree to fight—you just want to save lives. If fighting as a private contractor will, in fact, save lives, and any use of force will only be against those who are liable, is it morally permissible to be a contractor? I think so, given the import of saving lives. As such, mercenaries/private contractors might behave ethically sometimes.

Does this mean that we are incorrect to view mercenaries/private contractors as morally tainted? This would be too quick. We need to keep in mind that, although the occasional mercenary/private contractor might be fully ethical, it seems unlikely that they will be in general. There are at least two reasons to be sceptical of this. First, although there may be exceptions, it seems that financial considerations will often play a greater role in the decision for mercenaries/private contractors to take up arms than for regular soldiers. And, if we think that individuals should be motivated by concern for others rather than self-interest (manifest through the concern for financial gain), we should worry about the increased propensity for mercenary motives. Second, although it may be morally acceptable to be a mercenary/private contractor when considered in isolation, there is a broader worry about upholding and contributing to the general practice of mercenarism and the private military and security industry. One should be wary about contributing to a general practice that is morally problematic, such as mercenarism.

To elaborate, the central ethical problems surrounding private military force do not concern the employees, but rather the employers of these firms. The worries include the following:

There are also some more general worries about the effects on market for private force on the international system. It makes it harder to maintain the current formal constraints (e.g. current international laws) on the frequency and awfulness of warfare that are designed for the statist use of force. And a market for force can be expected to increase international instability by enabling more wars and unilateralism, as well as by increasing the ability of state and nonstate actors to use military force.

James Pattison is Senior Lecturer in Politics at the University of Manchester and is the author of The Morality of Private War: The Challenge of Private Military and Security Companies (OUP 2014).