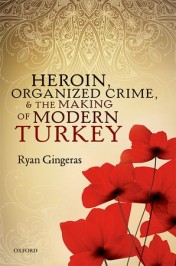 Heroin, Organized Crime, and the Making of Modern Turkey

In December 2013, Turkish authorities arrested the sons of several prominent cabinet ministers on bribery, embezzlement, and smuggling charges. Investigators claimed that the men were contributing members in a conspiracy to illicitly trade Turkish gold for Iranian oil gas (an act which, among other things, violates the spirit of United Nations’ sanctions targeting Tehran). The scheme purportedly netted a vast fortune in proceeds in the form of dividends and bribes. Among those suspected of benefiting from the trade was Prime Minister (now President) Tayyip Erdoğan and members of his family. The firestorm from this scandal was initially so furious many feared that Erdoğan’s Justice and Development Party would not survive its implications. Yet as of this September, the investigation into this scandal has all but come to an end. The officials involved in propagating and executing the investigation have all been dismissed or transferred. Consequently, virtually all charges related to the case have been dropped.

Most of the analysis of this scandal has focused upon the political implications of the arrests and the subsequent purges of Turkey’s national police force. Events since December have indeed underscored the intense levels of strife within Turkey’s governing institutions as well as the growing authoritarian tendencies of the country’s ruling party. Yet Turkey’s “oil for gold” corruption scandal also illuminates fundamental, yet long-standing, aspects of the relationship between prominent illicit trades and the country’s politics.

Turkey’s black market, by all accounts, is exceeding large and highly lucrative. As a country sitting at a major intersection in global commerce, Turkey acts as a spring, valve and spigot for multiple illicit industries. Weapons, narcotics and undocumented migrants, as well as contraband carpets, petroleum, cigarettes, and precious metals all pass in and through the country’s borders on a regular basis. Official statistics on cigarette smuggling offer a few hints of the extent of smuggling in and out of Turkey. According to Interior Ministry sources, Turkish seizures of smuggled cigarettes grew fourteen fold between 2009 and 2012 (with ten million cigarettes seized in 2009 and over 145 million in 2012). In January of this year, Bulgarian customs officials purportedly confiscated fourteen million cigarettes illegally imported from Turkey in one seizure alone. The numbers of arrests for cigarette smuggling has also climbed precipitously, with over 4000 people arrested in 2009 and over 24000 arrests in 2012.

Organized crime takes other forms in Turkey. Criminal networks, builders, and lawmakers have been known to violate laws governing land sales, usage, building safety, and contracting. Bribes and kickbacks to government officials and regulators historically have been essential elements in the rapid building projects undertaken throughout the country for much of the last century. Charges levied against the managers of Istanbul’s Fenerbahce soccer club stand as an example of the match fixing and extortion scandals that have rocked professional sports in Turkey in recent years. Gangsters and extortionists, known as kabadayı, have been counted among Turkey’s most noted and notorious figures in the public spotlight. All in all, organized criminal trades have generated an untold number of fortunes for a select few and have provided a subsistence living for an even larger number of average citizens for a very long time in Turkey.

If Tayyip Erdoğan and his family did glean a great fortune as a result of illicit doings (which some reports claim to amount to total in the tens of millions of dollars), Turkey’s president joins a fairly sizable host of Turkish politicians who have benefited from organized criminal trades. American officials in the 1950s, for example, secretly suspected that noted members of Adnan Menderes’ Democratic Party had protected major Turkish heroin traffickers. During the 1970s, at least four members of the Turkish Grand National Assembly were official charged with attempting to transport heroin abroad. Other politicians from this era, including one-time Prime Minister Necmettin Erbakan, were unofficially suspected of engaging in the drug trade but never charged. Accusations of theft and corruption especially dogged the governments of the tumultuous 1990s. Tansu Ciller, the country’s first female prime minister, was implicated in organized criminal activity both before and after she was first elected to office. Tayyip Erdoğan’s JDP came to power in 2002 with the promise of bringing discipline and respectability to politics. Yet even as recent as last year, a regional JDP chairman was implicated in trading in heroin in the province of Van. The revelations of December 2013 now has many in Turkey convinced that the JDP is as dirty and corruptible as any of the parties that had preceded it.

Erdoğan’s ability to deflect last year’s corruption charges has not put the specter of smuggling and corruption to rest. Local media reports and other studies suggest that the Syrian civil war has stimulated a surge in smuggling along Turkey’s southern border. It is now estimated that fuel, cigarette, and cell phone smuggling has risen by 314%, 135%, and 563% respectively since the war began. The initial efforts to arm and maintain resistance groups in Syria were deeply indebted to Turkey’s smuggling trade. As smuggling continues, it is clear that some groups have attempted to tax trade into and out of Syria (al-Nusrah, for example, purportedly levies a fee of 500 Syrian lira for every barrel of fuel that crosses the border). What this means for the present and future of Turkey’s government is not entirely clear. Suggestions that Ankara has allowed for the passage of large numbers of foreign fighters into Syria has cast doubt over the country’s police and customs officials stationed on its borders (particularly after the official purges earlier this year). Trading schemes and corruption allegations like those revealed in December may yet again manifest themselves considering what international watchdogs call Turkey’s “grey” status as a state with loose embezzlement and money laundering controls. Whether these trends will dent the image of Tayyip Erdoğan or upend JDP control over Turkey remains to be seen.

Ryan Gingeras is an associate professor at the Naval Postgraduate School. He has written extensively on the history of the Ottoman Empire and the Republic of Turkey. He is the author of Heroin, Organized Crime, and the Making of Modern Turkey (Oxford 2014).

How our financial system has gotten out of control [excerpt]