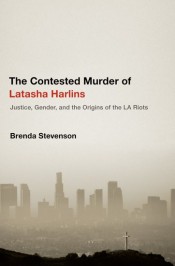 The Contested Murder of Latasha Harlins: Justice, Gender, and the Origins of the LA Riots

On 9 August 2014, Officer Darren Wilson of the Ferguson, Missouri (a suburb of St. Louis) Police Department, shot and killed Michael Brown, an unarmed 18-year-old. Officer Wilson is white and Michael Brown was black, sparking allegations from wide swaths of the local and national black community that Wilson’s shooting of Brown, and the Ferguson Police Department’s reluctance to arrest the officer, are both racially motivated events that smack of an historic trend of black inequality within the US criminal justice system.

The fact that the Ferguson Police Department and city government are predominantly white, while the town is predominantly black, has underscored this distrust. So too have recent events in Los Angeles, New York, Ohio, South Carolina, St. Louis, and other places that suggest a disturbing pattern of white police personnel’s use of excessive force in the beatings or deaths of blacks across the nation. So disturbing, in fact, that this case and the others linked to it not only have inspired an organic, and diverse, crop of youth activists, but also have captured the close attention of President Barack Obama, Attorney General Eric Holder, national civil rights organizations and the national black leadership. Indeed, not one or two, but three concurrent investigations of Officer Wilson’s shooting of Michael Brown are ongoing—one by the St. Louis Police Department and the other two by the FBI and the Justice Department, who are concerned with possible civil rights violations. The case also has a significant international following. The parents of Michael Brown raised this profile recently when they testified in Geneva, Switzerland before the United Nations Committee against Torture. There, they joined a US delegation to plead for support to end police brutality aimed at profiled black youth.

The details of the shooting investigations, each bit eagerly seized by opposing sides (those who support Brown and those who defend Wilson) as they become publicly available, still don’t give a comprehensive view of what actually happened between the officer and the teen, leaving too much speculation as to whether or not the Ferguson Grand Jury, who have been considering the case since 20 August, will return an indictment(s) against Officer Wilson.

What is known of the incident is that about noon on that Saturday, Michael Brown and a friend, Dorian Johnson, were walking down Canefield Drive in Ferguson when Darren Wilson approached the two in his squad car, telling them to get out of the street and onto the sidewalk. A scuffle ensued between Brown and Wilson within the police car. In his defense, Officer Wilson has stated that Brown attacked him and tried to grab his weapon. Dorian Johnson has countered that Wilson pulled Michael Brown into his car, suggesting that Brown was trying to defend himself from an overly aggressive Wilson. Shots were fired in Wilson’s police car and Brown ran down the street, pursued by Wilson. Autopsy reports indicate that Brown was shot at least six times, four times in his left arm, once through his left eye and once in the top of his head. The latter caused the youth’s death. Michael Brown’s body lay in the street, uncovered, for several hours while the police conducted a preliminary investigation, prompting even more outrage by black onlookers.

Since Michael Brown’s death, protestors from the area and across the nation have occupied the streets of Ferguson, demanding justice for the slain teen and his family. Nights of initial confrontations between police forces (the Ferguson Police, the St. Louis Police, the Missouri State Troopers and the National Guard have all been deployed in Ferguson at some time, and in some capacity, since the shooting) and though there has been some arson, looting, protestor and police violence, and arrests—even of news reporters—the protests generally have been peaceful. Not only police action during these protests, but their equipment as well, have sparked criticism and the growing demand that law enforcement agencies demilitarize. The daily protests have persisted, at times growing in great number, as during a series of “Hands up, Don’t Shoot” events that were held not just in Ferguson, but in many cities nationwide, including Chicago, New York, Washington, D.C., Los Angeles and Omaha, Nebraska in August and September. The “hands up” stance is to protest Brown’s shooting which some, but not all, witnesses have stated came even with Brown’s hands up in a gesture of surrender to Wilson.

Missouri Governor Jay Nixon, and other state and local officials, along with many of the residents of Ferguson, fear that if the Grand Jury does not indict Darren Wilson for Michael Brown’s murder, civil unrest will erupt into violence, producing an event similar to the Los Angeles Riots of 1992. In Los Angeles, large numbers of persons rioted when it seemed that the legal outcomes of two back-to-back criminal cases smacked of black injustice—the acquittal of four white police officers indicted in the assault of black motorist Rodney King, and the no jail-time sentence of a Korean shopkeeper found guilty for the murder of Latasha Harlins, a black teen. The result was the worst race riot in US history, with more than 50 people killed, the burning of a substantial portion of the ethnic business enclave of Koreatown, and at least a billion dollars in property damage.

Certainly the fear is a legitimate one. The vast majority of US race riots that have centered on black participation have occurred with like conditions as a spark—the community’s belief that a youth or vulnerable person among them has been brutalized with state sanction. The nation has witnessed these events not only in Los Angeles in 1965 and 1992; but also in Harlem in 1935 and 1964; Richmond, California in 1968; San Francisco in 1986; Tampa, Florida in 1967 and 1986; Miami in 1980; Newark, New Jersey in 1967; York, Pennsylvania in 1969; Crown Heights (Brooklyn), New York in 1991; St. Petersburg, Florida in 1996; Cincinnati, Ohio in 2001; Benton Harbor, Michigan in 2003; Oakland, California in 2009 and 2010, and the list goes on. These events all have served as cautionary tales that, unfortunately, have not resulted in either the perception or reality of black equality before the law. It is this legacy that frustrates and frightens Ferguson residents.

Brenda E. Stevenson is a Professor and historian at the University of California Los Angeles. Her work focuses on African American history, particularly that of women enslaved during the antebellum period in the United States. Her most recent book, is The Contested Murder of Latasha Harlins: Justice, Gender, and the Origins of the LA Riots, published by Oxford University Press in 2013 and winner of the OAH James Rawley Prize. You can read more about Race Relations in the United States on the Oxford African American Studies Center.