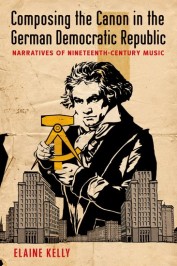 Composing the Canon in the German Democratic Republic: Narratives of Nineteenth-Century Music

The collapse of the Berlin Wall twenty-five years ago this month prompted a diverse range of musical responses. While Mstislav Rostropovich celebrated the momentous event by giving a very personal, impromptu performance of Bach’s Cello Suites in front of the Wall two days after it had been breached, David Hasselhoff regaled Berliners from atop of what remained of the Wall on New Year’s Eve of 1989 with a glitter-studded rendition of his chart hit “Looking for Freedom.” The values ascribed in the West to the demise of communism were captured especially clearly in the role assigned to Beethoven during this heady period. From the free concert of the First Piano Concerto and Seventh Symphony that was offered to the newly-liberated East Germans by West Berlin’s flagship Philharmonic Orchestra three days after the fall of the Wall to Leonard Bernstein’s performances of the Ninth Symphony in the East and West of the city a month later, the message was consistent; Beethoven’s music was deemed to embody both the triumph of liberal democracy and the unification of a once-divided people. This symbolism was particularly apparent in Bernstein’s two concerts. While the emancipation of East Germany was reflected in his substitution of “Freiheit” (freedom) for “Freude” (joy) in the choral finale, the performances themselves staged a musical act of universal brotherhood; the orchestra comprised of musicians from both Germanies and all four of the Allied powers, and the events were broadcast live across the globe.

Such unironic celebrations of the universal Beethoven obscured the complex relationship that East Germans had with the composer. Cultural policy in the German Democratic Republic was driven by an Enlightenment conviction in the transformative, unifying, and humanizing powers of art, and from the outset the government had harnessed Beethoven as a pivotal figure in their plans to implement state socialism. His revolutionary zeal was hailed as a template for East German citizens and his heroic style as the ultimate expression of socialist ideals. This narrative persisted in official portrayals of the composer for the duration of the state’s forty-year existence. Beyond the sphere of official rhetoric, however, Beethoven’s reception was far more conflicted. As the promised socialist utopia failed to materialize and the chasm widened between the rhetoric of revolution propagated by the party and the realities of life in the socialist state, Beethoven was approached increasingly not as an iconic statesman but as a vehicle for exploring of the problematic position of art and the artist in East German society.

An early example of this phenomenon can be observed in Reiner Kunze’s 1962 poem “Die bringer Beethovens” (the bringers of Beethoven), in which Beethoven serves as an allegory for totalitarianism rather than Enlightenment humanism. Published in the 1969 collection sensible wege, the poem relates the battle of “the man M.” against the faceless “bringers of Beethoven,” who inculcate the masses by subjecting them to a recording of the Fifth Symphony. The man attempts to resist this indoctrination by retreating inside his house only to have the bringers first fix loudspeakers over his windows, and then force their way in armed with the record. He responds by beating them with an iron ladle. A trial follows at which he is judged to be redeemable. Redemption, however, inevitably lies in the Fifth Symphony to which he is sentenced to listen. His punishment kills him, but death provides no release: at his funeral his children request that none other than the Fifth Symphony be played.

In the years that followed, alternative readings of Beethoven became increasingly prominent. Characteristic, for instance, is Reiner Bredemeyer’s short piece for orchestra and piano Bagatellen für B. of 1970, which sets the opening chords of the “Eroica” Symphony against the Bagatelles op. 119, no. 4 and op. 126 no. 2. Bredemeyer’s focus on the Bagatelles was a pointed challenge to the socialist Beethoven. Grounded in the femininity of the nineteenth-century drawing room rather than the revolutionary public sphere, these piano miniatures represented a significant affront to the one-dimensional heroic portrayals of the composer that dominated in the German Democratic Republic. A similar confrontation can be observed in Horst Seemann’s 1976 biopic Beethoven – Tage aus einem Leben. Here Beethoven is depicted not as a socialist deity, but as a very human and conflicted individual, plagued by failed love affairs, domestic ineptitude, and an inability to reconcile himself with society around him.

Driving these works was a pointed questioning of the social and political efficacy of art. Striking in this context are the opening scenes of Seemann’s film, which cut between a live performance of Beethoven’s “Battle Symphony” and a gory re-enactment of the Battle of Vittoria itself. Far from heralding the symphony as a revolutionary force, however, this juxtaposition of concert hall and battlefield exposes the fallacy of the Beethoven myth. Graphic images of wounded and dying soldiers sit uncomfortably with frames of the concert audience, who clap delightedly in response to the music and eat chocolates as they listen. Art serves here not as a harbinger of political change but simply as a mode of entertainment.

The demise of the German Democratic Republic did little to quell this disillusioned perspective, and the triumphant narratives of Beethoven that resurfaced in 1989 stood decidedly at odds with the prevailing mood among East German artists. Crucially, the euphoria that accompanied the fall of the Wall was tempered for the latter group by a sense of a loss, a loss not for their repressive country but for the ideals and hopes that this country had once promised. Key among these was the notion that art could serve as a force for good and play a profound role in effecting social reform. From this perspective, the failure of the German Democratic Republic was not just a failure of socialism. It was also a failure of art. As Bredemeyer observed in a 1992 interview with reference to the East German composer Hanns Eisler: “If music is an instrument of intervention in the sense of Eisler … then I have to say, very well then. Eisler lost, I too; it doesn’t work anymore.”

Elaine Kelly is Senior Lecturer in Music at the University of Edinburgh. She is the author of Composing the Canon in the German Democratic Republic: Narratives of Nineteenth-Century Music. She is co-editor, together with Amy Wlodarski, of Art Outside the Lines: New Perspectives on GDR Art Culture (2013). Her research has been published in journals such as 19th-Century Music,Music & Letters, and Kritika: Explorations in Russian and Eurasian History.