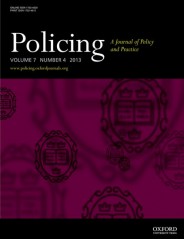 On 31 December 1941, August Vollmer hosted the first meeting of the National Association of College Police Training Officials at his home. The organization initially focused on developing standardized curricula for university-based policing programs, but soon expanded its scope to include the more general field of criminology. In 1958, the American Society of Criminology (ASC) name was officially adopted.

Vollmer, first police chief of Berkeley, CA and founder of the first school of criminology at the University of California Berkeley, is generally regarded as the father of modern policing.

O.W. Wilson, himself a prominent figure in modern policing, perhaps summed up Vollmer’s influence best in a 1953 article in the Journal of Criminal Law and Criminology: “August Vollmer, police administrator and consultant, student, educator, author, and criminologist, will be recorded in American police history as the man who contributed most to police professionalization by promoting the application of scientific principles to police service.”

While Vollmer’s focus on science was largely on forensic and physical sciences, in part because of a lack of social science research on the police at the time, he was one of the first to recognize that the police could partner with scientists and other outsiders to increase their effectiveness and efficiency. He embodied the idea of infusing policing with research and scientific knowledge that is the hallmark of efforts to make policing more evidence-based today.

We can only speculate on how Vollmer would run a police department today. But based on his strong belief that officers should be well-educated and exposed to the latest research findings through extensive training throughout their careers, we might assume he would embrace close collaboration between police and social scientists and the use of findings from rigorous studies to guide police practice. Today, our evidence base outside of the hard sciences is far larger. The Evidence-Based Policing Matrix, for example, includes nearly 130 methodologically rigorous studies of the crime control effectiveness of policing strategies.

As O.W. Wilson’s quote suggested, Vollmer not only incorporated research into policing, but he also was one of the first to straddle the line between science and practice through his work as a police chief and university professor. Vollmer’s interest in the link between universities and policing inspired that New Year’s Eve meeting in 1941, which eventually led to the formation of the ASC, now the largest professional organization devoted to criminology in the world.

The initial close link between the ASC and police education quickly dissipated, however. Many of the police practitioners and professors initially involved in the creation of the ASC began to feel as though the organization had become too sociological and concerned with questions of crime causation and uninterested in police practice. As Willard Oliver describes in his History of the Academy of Criminal Justice Sciences (ACJS), the International Association of Police Professionals was established by former ASC members in 1963 to focus more on police education. The organization eventually expanded its focus to the entire criminal justice system and took on its current name of ACJS. Thus, while Vollmer was instrumental in the creation of the ASC, his followers soon abandoned the organization in favor of ACJS. As a result, police practitioners have traditionally been more involved in the Annual Meetings of the ACJS, which has had a section on policing for more than 20 years.

Recently, a group of scholars and practitioners brought together by Cynthia Lum of George Mason University have begun the critical work of highlighting policing as an important part of criminology and the ASC. In May of this year, the ASC approved a new Division of Policing, with membership open to any ASC member. We encourage members to consider joining the Division when renewing (or beginning) their ASC membership for 2015.

As Anthony Braga, Cynthia Lum, and Edward Davis described in a recent article in The Police Chief, a major goal of the Division is to build strong partnerships between police and researchers that will ideally increase the number of completed research studies and improve translation of research findings into police practice. The Division thus marks a return to the roots of the ASC and Vollmer’s vision of a policing profession consistently using the best science and research to guide policy and practice.

Even without a formal Division in place, policing presentations have become a major component of the ASC conference. A guide to policing sessions of interest at the Annual Meeting next week includes more than 120 panels with policing presentations. This number should only increase in future years with the Division’s efforts, and ideally the number of police practitioners presenting at ASC will increase exponentially.

We invite everyone attending the 70th Annual Meeting of the American Society of Criminology to join us at the inaugural event for the Division of Policing to be held 20 November 2014 from 4:00-5:30pm.

The event will include opening remarks from San Francisco District Attorney and former Police Chief George Gascón. Wesley Skogan of Northwestern University will then provide a brief history of police research and introduce a distinguished group of police researchers and practitioners who will each speak briefly about their vision for the future of policing research.

It seems especially appropriate that this kick-off event for the Division will take place at the Marriott Marquis San Francisco, less than 15 miles away from 923 Euclid Avenue in Berkeley, Vollmer’s former home and the birthplace of the ASC.

Cody W. Telep is an assistant professor in the School of Criminology and Criminal Justice at Arizona State University. He received his Ph.D. in criminology, law and society from George Mason University. His research interests include evaluating innovations in policing, police legitimacy, evidence-based policy, and experimental criminology.