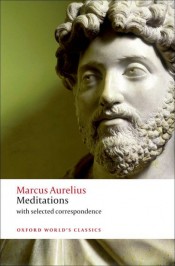 Marcus Aurelius’s Meditations is a remarkable phenomenon, a philosophical diary written by a Roman emperor, probably in 168-80 AD, and intended simply for his own use. It offers exceptional insights into the private thoughts of someone who had a very weighty public role, and may well have been composed when he was leading a military campaign in Germany. What features might strike us today as being especially valuable, bearing in mind our contemporary concerns?

At a time when the question of public trust in politicians is constantly being raised, Marcus emerges, in this completely personal document, as a model of integrity. Not only does he define for himself his political ideal (“a monarchy that values above all things the freedom of the subject”) and spell out what this ideal means in his reflections on the character and lifestyle of his adoptive father and predecessor as emperor, Antoninus Pius, but he also reminds himself repeatedly of the triviality of celebrity, wealth and status, describing with contempt the lavish purple imperial robe he wore as stained with “blood from a shellfish”. Of course, Marcus was not a democratic politician and, with hindsight, we can find things to criticize in his acts as emperor — though he was certainly among the most reasonable and responsible of Roman emperors. But I think we would be glad if we knew that our own prime ministers or presidents approached their role, in their most private hours, with an equal degree of thoughtfulness and breadth of vision.

Another striking feature of the Meditations, and one that may well resonate with modern experience, is the way that Marcus aims to combine a local and universal perspective. In line with the Stoic philosophy that underpins his diary, Marcus often recalls that the men and women he encounters each day are fellow-members of the brotherhood of humanity and fellow-citizens in the universe. He uses this fact to remind himself that working for his brothers is an essential part of his role as an emperor and a human being. This reminder helps him to counteract the responses of irritation and resentment that, he admits, the behavior of other people might otherwise arouse in him. At a time when we too are trying to bridge and negotiate local and global perspectives, Marcus’s thoughts may be worth reflecting on. Certainly, this seems to me a more balanced response than ignoring the friend or partner at your side in the café while engrossed in phone conversations with others across the world.

More broadly, Marcus, again in line with Stoic thinking, underlines that the ethics of human behavior need to take account of the wider fact that human beings form an integral part of the natural universe and are subject to its laws. Of course, we may not share his confidence that the universe is shaped by order, structure and providential care — though I think it is worth thinking seriously about just how much of that view we have to reject. But the looming environmental crisis, along with the world-wide rise in obesity and the alarming healthcare consequences, represent for us a powerful reminder that we need to rethink the ethics of our relationship to the natural world and re-examine our understanding of what is natural in human life. Marcus’s readiness to see himself, and humanity, as inseparable parts of a larger whole, and to subordinate himself to that whole, may serve as a striking example to us, even if the way we pursue that thought is likely to be different from that of Stoicism.

Another striking theme in the Meditations is the looming presence of death, our own and those of others we are close to. This might seem very alien to the modern secular Western world, where death is often either ignored or treated as something too terrible to mention. But the fact that Marcus’s attitude is so different from our own may be precisely what makes it worth considering. He not only underlines the inevitability of death and the fact that death is a wholly natural process, and for that reason something we should accept. He couples this with the claim that knowledge of the certainty of death does not undermine the value of doing all that what we can while alive to lead a good human life and to develop in ourselves the virtues essential for this life. Although such ideas have often formed part of religious responses to death (which have lost their hold over many people today) Marcus puts them in a form that modern non-religious people can accept. This is another reason, I think, why Marcus’s philosophical diary can speak to us today in a language we can make sense of.

Christopher Gill is Professor of Ancient Thought at the University of Exeter. His interests focus on Greek and Roman ethics and psychology, including ancient ideas of personality and self, and the philosophical therapy of emotions. He is also concerned with the relationship between ancient and modern ideas on these topics. He is involved with the blog Stoicism Today, a forum for ideas on ancient Stoic philosophy for modern living.

The Mysterious Case of the Disappearing Existentialist