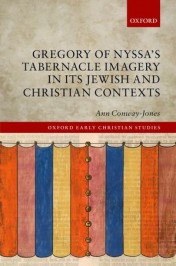 Gregory of Nyssa's Tabernacle Imagery in Its Jewish and Christian Contexts

This book identifies Gregory's biblical sources as well as the influences of both his Alexandrian predecessors (Philo, Clement, and Origen) and his fourth-century context, before comparing the life to other heavenly-ascent texts.

In Andrei Rublev’s icon of the Trinity, all three figures have blue in their clothing: a bright azure blue which stands out from the predominant warm golden yellows.

Commentaries on the icon refer to this as the blue of the sky, representing divinity. Investigating the correlation of blue with divinity takes us down some surprising and intriguing avenues.

In A Field Guide to Getting Lost, Rebecca Solnit discusses ‘the blue of distance’. As she explains, the sky is blue because light at the blue end of the spectrum is scattered by air molecules as it travels from the sun to us.

It is the ‘light that does not touch us, does not travel the whole distance, the light that gets lost’ which ‘gives us the beauty of the world, so much of which is in the color blue’. She continues:

Blue, therefore, would seem to be a particularly apt colour with which to represent divinity.

The association of divinity with blue goes back much further than Rublev and fifteenth century Russia.

Over a thousand years earlier, the fourth century monk Evagrius of Pontus (an intellectual who fled Constantinople for the solitude of the desert after falling in love with a married woman) wrote of prayer: ‘Prayer is a state of the mind that arises under the influence of the unique light of the Holy Trinity’ (Reflections 27).

He specified the colour of that light:

When the mind has put off the old self and shall put on the one born of grace, then it will see its own state in the time of prayer resembling sapphire or the colour of heaven; this state scripture calls the place of God that was seen by the elders on Mount Sinai. (On Thoughts 39)

If someone should want to behold the state of his mind, let him deprive himself of all mental representations, and then he shall behold himself resembling sapphire or the colour of heaven. (Reflections 2)

The light of the Trinity, which suffuses the mind in the highest forms of prayer, is sapphire blue, the colour of heaven. Evagrius did not reach this conclusion as a result of abstract thought, but on the basis of a particular biblical verse: Exodus 24:10.

In the Greek translation of the Hebrew Bible (the Septuagint) with which he will have been familiar, it reads: ‘And they saw the place, there where the God of Israel stood, and that which was beneath his feet, like something made from sapphire brick and like the appearance of the firmament of heaven in purity.’

At this point in Exodus, the Ten Commandments have already been given, and Moses has been commanded to ascend Mount Sinai once more, along with Aaron, Nadab, Abihu, and seventy of the elders.

This ‘sapphire’ (Greek sappheiros, Hebrew sappir) is not the transparent gemstone, but lapis lazuli, a stone prized for its intense deep blue. The word ‘Lazuli’, along with the adjective ‘azure’, derives from the Persian name for the stone. Rublev will have used lapis lazuli as the pigment for his blue.

The Hebrew version of Exodus 24:10 says that lapis lazuli is ‘like the very heavens for clearness’. The stone often includes minute golden pyrite crystals, which shimmer like stars in the night sky.

The Greek translation brings in the word ‘firmament’, which sends us back to Genesis 1:6, where God says, ‘Let there be a firmament in the midst of the waters, and let it separate the waters from the waters’. The firmament was imagined as a solid dome, separating the waters above (the heavens) from the waters below (the sea).

When the prophet Ezekiel has his terrifying vision of the heavenly chariot, he sees four angelic ‘living beings’ (with four faces, and four wings) carrying a crystalline firmament over their heads, upon which is a sapphire (i.e. lapis lazuli) throne.

On the throne is ‘the appearance of the likeness of the glory of the Lord’ (Ezekiel 1:28). In other words, Ezekiel has a vision of God at three removes: a fiery being on a blue throne.

In the biblical descriptions of Genesis, Exodus and Ezekiel, physical and spiritual heavens are intertwined. The blue of the sky merges with the throne of God. Evagrius begins a process of interiorising these descriptions, just as Rebecca Solnit interiorises the physics of scattered blue light.

For Evagrius, Mount Sinai becomes a landmark in the geography of the soul. And the colour blue symbolises the internal state of the mind at prayer. An internal state no doubt Rublev aimed to foster with his use of divine azure blue.

Ann Conway-Jones is a freelance writer, and Honorary Research Fellow at the University of Birmingham. Her book Gregory of Nyssa’s Tabernacle Imagery in its Jewish and Christian Contexts is out now.

The New Testament: Jewish or Gentile?