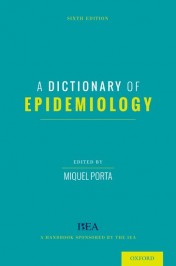 A Dictionary of Epidemiology

If a “revolution” in our field or area of knowledge was ongoing, would we feel it and recognize it? And if so, how?

I think a methodological “revolution” is probably going on in the science of epidemiology, but I’m not totally sure. Of course, in science not being sure is part of our normal state. And we mostly like it. I had the feeling that a revolution was ongoing in epidemiology many times. While reading scientific articles, for example. And I saw signs of it, which I think are clear, when reading the latest draft of the forthcoming book Causal Inference by M.A. Hernán and J.M. Robins from Harvard (Chapman & Hall / CRC, 2015). I think the “revolution” — or should we just call it a “renewal”? — is deeply changing how epidemiological and clinical research is conceived, how causal inferences are made, and how we assess the validity and relevance of epidemiological findings. I suspect it may be having an immense impact on the production of scientific evidence in the health, life, and social sciences. If this were so, then the impact would also be large on most policies, programs, services, and products in which such evidence is used. And it would be affecting thousands of institutions, organizations and companies, millions of people.

One example: at present, in clinical and epidemiological research, every week “paradoxes” are being deconstructed. Apparent paradoxes that have long been observed, and whose causal interpretation was at best dubious, are now shown to have little or no causal significance. For example, while obesity is a well-established risk factor for type 2 diabetes (T2D), among people who already developed T2D the obese fare better than T2D individuals with normal weight. Obese diabetics appear to survive longer and to have a milder clinical course than non-obese diabetics. But it is now being shown that the observation lacks causal significance. (Yes, indeed, an observation may be real and yet lack causal meaning.) The demonstration comes from physicians, epidemiologists, and mathematicians like Robins, Hernán, and colleagues as diverse as S. Greenland, J. Pearl, A. Wilcox, C. Weinberg, S. Hernández-Díaz, N. Pearce, C. Poole, T. Lash , J. Ioannidis, P. Rosenbaum, D. Lawlor, J. Vandenbroucke, G. Davey Smith, T. VanderWeele, or E. Tchetgen, among others. They are building methodological knowledge upon knowledge and methods generated by graph theory, computer science, or artificial intelligence. Perhaps one way to explain the main reason to argue that observations as the mentioned “obesity paradox” lack causal significance, is that “conditioning on a collider” (in our example, focusing only on individuals who developed T2D) creates a spurious association between obesity and survival.

The “revolution” is partly founded on complex mathematics, and concepts as “counterfactuals,” as well as on attractive “causal diagrams” like Directed Acyclic Graphs (DAGs). Causal diagrams are a simple way to encode our subject-matter knowledge, and our assumptions, about the qualitative causal structure of a problem. Causal diagrams also encode information about potential associations between the variables in the causal network. DAGs must be drawn following rules much more strict than the informal, heuristic graphs that we all use intuitively. Amazingly, but not surprisingly, the new approaches provide insights that are beyond most methods in current use. In particular, the new methods go far deeper and beyond the methods of “modern epidemiology,” a methodological, conceptual, and partly ideological current whose main eclosion took place in the 1980s lead by statisticians and epidemiologists as O. Miettinen, B. MacMahon, K. Rothman, S. Greenland, S. Lemeshow, D. Hosmer, P. Armitage, J. Fleiss, D. Clayton, M. Susser, D. Rubin, G. Guyatt, D. Altman, J. Kalbfleisch, R. Prentice, N. Breslow, N. Day, D. Kleinbaum, and others.

We live exciting days of paradox deconstruction. It is probably part of a wider cultural phenomenon, if you think of the “deconstruction of the Spanish omelette” authored by Ferran Adrià when he was the world-famous chef at the elBulli restaurant. Yes, just kidding.

Right now I cannot find a better or easier way to document the possible “revolution” in epidemiological and clinical research. Worse, I cannot find a firm way to assess whether my impressions are true. No doubt this is partly due to my ignorance in the social sciences. Actually, I don’t know much about social studies of science, epistemic communities, or knowledge construction. Maybe this is why I claimed that a sociology of epidemiology is much needed. A sociology of epidemiology would apply the scientific principles and methods of sociology to the science, discipline, and profession of epidemiology in order to improve understanding of the wider social causes and consequences of epidemiologists’ professional and scientific organization, patterns of practice, ideas, knowledge, and cultures (e.g., institutional arrangements, academic norms, scientific discourses, defense of identity, and epistemic authority). It could also address the patterns of interaction of epidemiologists with other branches of science and professions (e.g. clinical medicine, public health, the other health, life, and social sciences), and with social agents, organizations, and systems (e.g. the economic, political, and legal systems). I believe the tradition of sociology in epidemiology is rich, while the sociology of epidemiology is virtually uncharted (in the sense of not mapped neither surveyed) and unchartered (i.e. not furnished with a charter or constitution).

You may say: “And what about textbooks? Are they changing dramatically? Has one changed the rules?” Well, the new generation of textbooks is just emerging, and very few people have yet read them. Two good examples are the already mentioned text by Hernán and Robins, and the soon to be published by T. VanderWeele, Explanation in causal inference: Methods for mediation and interaction (Oxford University Press, 2015). Clues can also be found in widely used textbooks by K. Rothman et al. (Modern Epidemiology, Lippincott-Raven, 2008), M. Szklo and J Nieto (Epidemiology: Beyond the Basics, Jones & Bartlett, 2014), or L. Gordis (Epidemiology, Elsevier, 2009). Above all, the foundations of the current revolution can be seen in “Causality: Models, Reasoning and Inference” by Judea Pearl (2nd. edition, Cambridge University Press, 2009).

Finally, another good way to assess what might be changing is to read what gets published in top journals as Epidemiology, the International Journal of Epidemiology, the American Journal of Epidemiology, or the Journal of Clinical Epidemiology. Pick up any issue of the main epidemiologic journals and you will find several examples of what I suspect is going on. If you feel like it, look for the DAGs. I recently saw a tweet saying “A DAG in The Lancet!”. It was a surprise: major clinical journals are lagging behind. But they will soon follow and adopt the new methods: the clinical relevance of the latter is huge. Or is it not such a big deal? If no “revolution” is going on, how are we to know?

Miquel Porta, an epidemiologist and scholar from Barcelona, is the editor of A Dictionary of Epidemiology (6th. edition, Oxford University Press, 2014).

The slippery slope of the human gene editing debate

The trouble with disease awareness campaigns