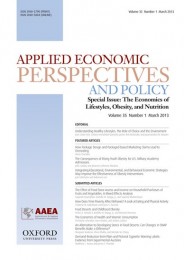 Applied Economic Perspectives and Policy (AEPP) aims to present high-quality research in a forum that is informative to a broad audience of agricultural and applied economists, including those both inside and outside academia, and those who are not specialists in the subject matter of the articles. In addition, AEPP publishes specially-commissioned featured articles focusing on the synthesis and integration of applied research and on future research agendas.

It is well known that obesity rates have been increasing around the Western world.

Policy makers, researchers, and the general public are concerned about this trend because obesity is linked to an increase likelihood of health conditions such as diabetes and heart disease, among others. The increase in the obesity prevalence among children is of concern because of the possibility that obesity during childhood will increase the likelihood of being obese as an adult thereby leading to even higher rates of these health conditions in the future.

Researchers have investigated many possible causes for this trend including lower rates of participation in physical activity and easier access to fast food. Anderson, Butcher, and Levine (2003) identified maternal employment as a possible culprit when they noticed that in the US the timing of these two trends was similar. While the prevalence of obesity was increasing for children so was the employment rate of mothers. Other researchers have found similar results for other countries – more hours of maternal employment is related to a higher likelihood of children being obese.

What could be the relationship between a mother’s hours of work and childhood obesity? When mothers work they have less time to devote to activities around the home, which may mean less concern about nutrition, more meals eaten outside of the home or less time devoted to physical activities. On the other hand, more maternal employment could mean more income and an ability to purchase more nutritious food or encourage healthy activities for children.

We looked at this relationship for Canadian children 12-17 years old – an older group of children than studied in earlier papers. For youths aged 12 to 17 in Canada, the obesity prevalence was 7.8% in 2008. We analysed not only at the relationship between maternal employment and child obesity, but also the possible reasons that maternal employment may affect child obesity.

We find that the effect of hours of work differs from the effect of weeks of work. More hours of maternal work are related to activities we expect to be related to higher rates of obesity – more television viewing, less likely to eat breakfast daily, and a higher allowance. On the other hand, more weeks of maternal employment are related to behaviour expected to lower obesity – less television viewing and more physical activity. This difference between hours and weeks of work raises some interesting questions. How do families adapt to different aspects of the labour market? When mothers work for more weeks does this indicate a more regular attachment to the labour force? Do these families have schedules and routines that allow them to manage their child’s weight?

The debate over appropriate policy remedies should not focus on whether mothers should work, but rather should focus on what children are doing when mothers are working. What can be done to reduce the obesity prevalence in adolescents? Some ideas include working with the education system and local communities to create an environment for adolescents that fosters healthy weight status, supporting families with quality childcare, provision of viable and high-quality alternative activities, or flexible work hours. Programs or policies that help families establish a healthy routine are important. It may not be a case of simply providing activities for adolescents, but that these activities are easy for families to attend on a regular basis.

Dr. James Chowhan is an Adjunct Assistant Professor with the DeGroote School of Business' management of organizational behaviour and human resources program at McMaster University. His program of research focuses on the relationship between human resource management practices and organizational outcomes. In particular, the effect of human capital development and training on innovation and performance are of interest.

Dr Jennifer Stewart is an Associate Professor in the School of Public Policy and Administration at Carleton University. Her research is in the areas of labour and health economics, particularly where these fields overlap.

They are the co-authors of 'While Mothers Work Do Children Shirk? Determinants of Youth Obesity', published in the Journal of Applied Economic Perspectives and Policy.