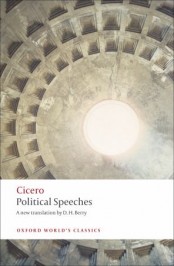 In a week’s time, the residents of Scotland (not the Scottish people: Scots resident south of the border are ineligible to vote) will decide whether or not to destroy the UK as currently constituted. The polls are on a knife edge; and Alex Salmond, the leader of the separatists, has a track record as a strong finisher. If he gets his way, the UK will lose 8% of its citizens and a third of its land mass; and Scotland, cut off, at least initially, from every international body (the UN Security Council, NATO, the EU) and every UK institution (the Bank of England, the pound sterling, the BBC, the security services), will face a bleak and uncertain future.

In the first century BC, the Roman republic was collapsing as a result of its systemic inability to curb the ambitions of powerful politicians. Everyone could see that the end was nigh; no one could predict what would follow. The conditions were ideal for the development of political oratory, and Cicero emerged as Rome’s greatest orator, determined to save his country even at the cost of his own life. During his consulship, he suppressed the conspiracy of Catiline, denouncing that man and his deluded supporters in his four Catilinarian Speeches. He pulled no punches: he did not hold back, like the supporters of the Union today, for fear of appearing too “negative”. So he informed the senate:

“A plot has been formed to ensure that, following a universal massacre, there should not be a single person left even to mourn the name of the Roman people or to lament the destruction of so great an empire.”

For Catiline’s supporters, he had nothing but contempt, telling the people:

“Reclining at their banquets, embracing their whores, heavy with wine, stuffed with food, wreathed with flowers, drenched with perfume, and worn out by promiscuous sex, they belch out their plans for the massacre of decent citizens and the burning of Rome.”

Cicero went straight for the jugular. Two decades later he denounced a more powerful adversary, Mark Antony, who was attempting with much greater forces to seize control of the state. Cicero attacked him in a series of speeches, the Philippics; but Antony did a deal with Octavian, got what he wanted, and had Cicero killed. Cicero’s words at the end of the Second Philippic were prophetic:

“I defended this country when I was a young man: I shall not desert it now that I am old. I faced down the swords of Catiline: I shall not flinch before yours. Yes, and I would willingly offer my body, if the freedom of this country could at once be secured by my death. Two things alone I long for: first, that when I die I may leave the Roman people free; and second, that each person’s fate may reflect the way he has behaved towards his country.”

Where is Cicero today when we need him? The debate on the future of Scotland, and hence of the UK, has been conducted in newspapers, in TV interviews and debates, and in social media. Anonymous internet trolls hurl abuse at celebrities who dare to express their affection for Britain. The Westminster Parliament stays silent. One MP, however, is free of the party whips, and has been touring Scotland delivering passionate, hard-hitting and unapologetically negative speeches in defence of the Union. This is George Galloway, and the speech he gave in Edinburgh on 24 June can be read and listened to here.

Like Cicero, Galloway pulls no punches. He compares the current crisis with 1940, the last time the UK faced an existential threat:

“And not one person asked in that summer and autumn of 1940 and into 1941 if the pilots who were spinning above us defending us from invasion from the barbaric horde were from Suffolk or Sutherland. We were people together on a small piece of rock with 300 years of common history.”

Referring to his political differences with the other supporters of the Union, he says, “We have come together but temporarily at a moment of national peril”, declaring:

“There will be havoc if you vote Yes in September. Havoc in Edinburgh and throughout the land and you will break the hearts of many others too.”

This preference for extreme, unambiguous statements, delivered with the greatest possible emotional force, and this recognition of the significance of the historical moment, is pure Cicero. But what is most Ciceronian in Galloway’s speech is the moral dimension. Galloway is not concerned with whether the new Scottish state would have to concentrate its spending on benefits or foreign embassies. Instead, he harks back repeatedly to the Second World War, that conflict of good against evil, contrasting it with Bannockburn, “a battle 700 years ago between two French-speaking kings with Scottish people on both sides”. And, as Cicero would, he judges an issue by the moral character of the people concerned: on the one side, Brian Souter, “the gay-baiting billionaire” and major donor of the SNP, and on the other, the children’s author J. K. Rowling, “one of our highest achieving women in the history of our entire country”, whose moderate and reasoned support for the Union has earned her hate mail from fanatical separatists. Morality runs like a thread all the way through Galloway’s speech:

“How come so few women are in favour of independence? Why are Scotland’s women the most resistant of all the demographics in this contest? The reason is that women simply don’t like gambling. And everything in their project is about gambling — for your future, your pension, your children and their children’s future.”

“Let it be inscribed on the forehead of every citizen what he thinks about his country”, Cicero told the senate. Next week, the future of the UK will be decided by a secret ballot. If Britain survives in a political and not merely in a geographical sense, part of the credit will be due to the Ciceronian eloquence of Mr Galloway.

D. H. Berry is a Senior Lecturer at the University of Edinburgh and the translator of Cicero: Political Speeches and Cicero: Defence Speeches in Oxford World’s Classics.