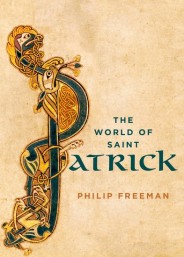 The World of Saint Patrick

Everyone knows about Saint Patrick — the man who drove the snakes out of Ireland, defeated fierce Druids in contests of magic, and used the shamrock to explain the Christian Trinity to the pagan Irish. It’s a great story, but none of it is true. The shamrock legend came along centuries after Patrick’s death, as did the miraculous battles against the Druids. Forget about the snakes — Ireland never had any to begin with. No snakes, no shamrocks, and he wasn’t even Irish.

The real story of St. Patrick is much more interesting than the myths. What we know of Patrick’s life comes only through the chance survival of two remarkable letters which he wrote in Latin in his old age. In them, Patrick tells the story of his tumultuous life and allows us to look intimately inside the mind and soul of a man who lived over fifteen hundred years ago. We may know more biographical details about Julius Caesar or Alexander the Great, but nothing else from ancient times opens the door into the heart of a man more than Patrick’s letters. They tell the story of an amazing life of pain and suffering, self-doubt and struggle, but ultimately of faith and hope in a world which was falling apart around him.

The historical Patrick was not Irish at all, but a spoiled and rebellious young Roman citizen living a life of luxury in fifth-century Britain when he was suddenly kidnapped from his family’s estate as a teenager and sold into slavery across the sea in Ireland. For six years he endured brutal conditions as he watched over his master’s sheep on a lonely mountain in a strange land. He went to Ireland an atheist, but there heard what he believed was the voice of God. One day he escaped and risked his life to make a perilous journey across Ireland, finding passage back to Britain on a ship of reluctant pirates. His family welcomed back their long-lost son and assumed he would take up his life of privilege, but Patrick heard a different call. He returned to Ireland to bring a new way of life to a people who had once enslaved him. He constantly faced opposition, threats of violence, kidnapping, and even criticism from jealous church officials, while his Irish followers faced abuse, murder, and enslavement themselves by mercenary raiders. But through all the difficulties Patrick maintained his faith and persevered in his Irish mission.

The Ireland that Patrick lived and worked in was utterly unlike the Roman province of Britain in which he was born and raised. Dozens of petty Irish kings ruled the countryside with the help of head-hunting warriors while Druids guided their followers in a religion filled with countless gods and perhaps an occasional human sacrifice. Irish women were nothing like those Patrick knew at home. Early Ireland was not a world of perfect equality by any means, but an Irish wife could at least control her own property and divorce her husband for any number of reasons, including if he became too fat for sexual intercourse. But Irish women who were slaves faced a cruel life. Again and again in his letters, Patrick writes of his concern for the many enslaved women of Ireland who faced beatings and abuse on a daily basis.

Patrick wasn’t the first Christian to reach Ireland; he wasn’t even the first bishop. What made Patrick successful was his dogged determination and the courage to face whatever dangers lay ahead, as well as the compassion and forgiveness to work among a people who had brought nothing but pain to his life. None of this came naturally to him, however. He was a man of great insecurities who constantly wondered if he was really cut out for the task he had been given. He had missed years of education while he was enslaved in Ireland and carried a tremendous chip on his shoulder when anyone sneered, as they frequently did, at his simple, schoolboy Latin. He was also given to fits of depression, self-pity, and violent anger. Patrick was not a storybook saint, meek and mild, who wandered Ireland with a beatific smile and a life free from petty faults. He was very much a human being who constantly made mistakes and frequently failed to live up to his own Christian ideals, but he was honest enough to recognize his shortcomings and never allow defeat to rule his life.

You don’t have to be Irish to admire Patrick. His is a story of inspiration for anyone struggling through hard times public or private in a world with unknown terrors lurking around the corner. So raise a glass to the patron saint of Ireland, but remember the man behind the myth.

Philip Freeman earned his Ph.D. in Classics and Celtic Studies at Harvard University. He teaches at Luther College in Decorah, Iowa and is the author of fifteen books, including The World of Saint Patrick.