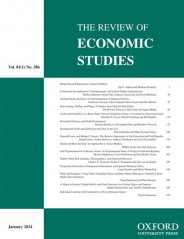 Innovation is a primary driver of economic growth and of the rise in living standards, and a substantial body of research has been devoted to documenting the welfare benefits from it (an example being Trajtenberg’s 1989 study). Few areas have experienced more rapid innovation than the Personal Computers (PC) industry, with much of this progress being associated with a particular component, the Central Processing Unit (CPU). The past few decades had seen a consistent process of CPU innovation, in line with Moore’s Law: the observation that the number of transistors on an integrated circuit doubles every 18-24 months (see figure below). This remarkable innovation process has clearly benefitted society in many, profound ways.

A notable feature of this innovation process is that a new PC is often considered “obsolete” within a very short period of time, leading to the rapid elimination of non-frontier products from the shelf. This happens despite the heterogeneity of PC consumers: while some (e.g., engineers or gamers) have a high willingness-to-pay for cutting edge PCs, many consumers perform only basic computing tasks, such as word processing and Web browsing, that require modest computing power. A PC that used to be on the shelf, say, three years ago, would still adequately perform such basic tasks today. The fact that such PCs are no longer available (except via a secondary market for used PCs which remains largely undeveloped) raises a natural question: is there something inefficient about the massive elimination of products that can still meet the needs of large masses of consumers?

Consider, for example, a consumer whose currently-owned, four-year old laptop PC must be replaced since it was severely damaged. Suppose that this consumer has modest computing-power needs, and would have been perfectly happy to keep using the old laptop, had it remained functional. This consumer cannot purchase the old model since it has long vanished from the shelf. Instead, she must purchase a new laptop model, and pay for much more computing power than she actually needs. Could it be, then, that some consumers are actually hurt by innovation?

A natural response to this concern might be that the elimination of older PC models from the shelves likely indicates that demand for them is low. After all, if we believe in markets, we may think that high levels of demand for something would provide ample incentives for firms to offer it. This intuition, however, is problematic: as shown in seminal theoretical work by Nobel Prize laureate Michael Spence, the set of products offered in an oligopoly equilibrium need not be efficient due to the misalignment of private and social incentives. The possibility that yesterday’s PCs vanish from the shelf “too fast” cannot, therefore, be ruled out by economic theory alone, motivating empirical research.

A recent article addresses this question by applying a retrospective analysis of the U.S. Home Personal Computer market during the years 2001-2004. Data analysis is used to explore the nature of consumers’ demand for PCs, and firms’ incentives to offer different types of products. Product obsolescence is found to be a real issue: the average household’s willingness-to-pay for a given PC model is estimated to drop by 257 $US as the model ages by one year. Nonetheless, substantial heterogeneity is detected: some consumers’ valuation of a PC drops at a much faster rate, while from the perspective of other consumers, PCs becomes “obsolete” at a much lower pace.

The paper focuses on a leading innovation: Intel’s introduction of its Pentium M® chip, widely considered as a landmark in mobile computing. This innovation is found to have crowded out laptops based on older Intel technologies, such as the Pentium III® and Pentium 4®. It is also found to have made a substantial contribution to the aggregate consumer surplus, boosting it by 3.2%- 6.3%.

These substantial aggregate benefits were, however, far from being uniform across different consumer types: the bulk of the benefits were enjoyed by the 20% least price-sensitive households, while the benefits to the remaining 80% were small and sometimes negligible. The analysis also shows that the benefits from innovation could have “trickled down” to the masses of price-sensitive households, had the older laptop models been allowed to remain on the shelf, alongside the cutting-edge ones. This would have happened since the presence of the new models would have exerted a downward pressure on the prices of older models. In the market equilibrium, this channel is shut down, since the older laptops promptly disappear.

Importantly, while the analysis shows that some consumers benefit from innovation much more than others, no consumers were found to be actually hurt by it. Moreover, the elimination of the older laptops was not found to be inefficient: the social benefits from keeping such laptops on the shelf would have been largely offset by fixed supplier costs.

So what do we make of this analysis? The main takeaway is that one has to go beyond aggregate benefits and consider the heterogeneous effects of innovation on different consumer types, and the possibility that rapid elimination of basic configurations prevents the benefits from trickling down to price-sensitive consumers. Just the same, the paper’s analysis is constrained by its focus on short-run benefits. In particular, it misses certain long-term benefits from innovation, such as complementary innovations in software that are likely to trickle down to all consumer types. Additional research is, therefore, needed in order to fully appreciate the dramatic contribution of innovation in personal computing to economic growth and welfare.

Alon Eizenberg is a Lecturer at the Department of Economics at the Hebrew University of Jerusalem. He is the author of the paper "Upstream Innovation and Product Variety in the U.S. Home PC Market", published in the Review of Economic Studies.

How disconnecting from digital pressures can boost learning