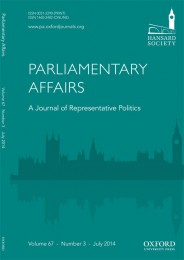 Parliamentary Affairs is an established, peer-reviewed academic quarterly covering all the aspects of government and politics directly or indirectly connected with Parliament and parliamentary systems in Britain and throughout the world. The journal is published in partnership with the Hansard Society. To mark the historic referendum in Scotland in September, the editors of Parliamentary Affairs have drawn together ten articles on referenda published in the journal over the last 60 years.

As we enter the potentially crucial phase of the Scottish independence referendum campaign, it is worth remembering more broadly that political campaigns always matter, but they often matter most at referendums.

Referendums are often classified as low information elections. Research demonstrates that it can be difficult to engage voters on the specific information and arguments involved (Lupia 1994, McDermott 1997) and consequently they can be decided on issues other than the matter at hand. Referendums also vary from traditional political contests, in that they are usually focused on a single issue; the dynamics of political party interaction can diverge from national and local elections; non-political actors may often have a prominent role in the campaign; and voters may or may not have strong, clear views on the issue being decided. Furthermore, there is great variation in the information environment at referendums. As a result the campaign itself can be vital.

We can understand campaigns through the lens of LeDuc’s framework which seeks to capture some of the underlying elements which can lead to stability or volatility in voter behaviour at referendums. The essential proposition of this model is that referendums ask different types of questions of voters, and that the type of question posed conditions the behaviour of voters. Referendums that ask questions related to the core fundamental values and attitudes held by voters should be stable. Voters’ opinions that draw on cleavages, ideology, and central beliefs are unlikely to change in the course of a campaign. Consequently, opinion polls should show very little movement over the campaign. At the other end of the spectrum, volatile referendums are those which ask questions on which voters do not have pre-conceived fixed views or opinions. The referendum may ask questions on new areas of policy, previously un-discussed items, or items of generally low salience such as political architecture or institutions.

Another essential component determining the importance of the campaign are undecided voters. When voter political knowledge emanates from a low base, the campaign contributes greatly to increasing political knowledge. This point is particularly clear from Farrell and Schmitt-Beck (2002) where they demonstrated that voter ignorance is widespread and levels of political knowledge among voters are often overestimated. As Ian McAllister argues, partisan de-alignment has created a more volatile electoral environment and the number of voters who make their decisions during campaigns has risen. In particular, there has been a sharp rise in the number of voters who decide quite late in a campaign. In this case, the campaign learning is vital and the campaign may change voters’ initial disposition. Opinions may only form during the campaign when voters acquire information and these opinions may be changeable, leading to volatility.

The experience of referendums in Ireland is worth examining as Ireland is one of a small but growing number of countries which makes frequent use of referendums. It is also worth noting that Ireland has a highly regulated campaign environment. In the Oireachtas Inquiries Referendum 2011, Irish voters were asked to decide on a parliamentary reform proposal (Oireachtas Inquiries – OI) in October 2011. The issue was of limited interest to voters and co-scheduled with a second referendum on reducing the pay of members of the judiciary along with a lively presidential election.

The OI referendum was defeated by a narrow margin and the campaign period witnessed a sharp fall in support for the proposal. Only a small number of polls were taken but the sharp decline is clear from the figure below.

Few voters had any existing opinion on the proposal and the post-referendum research indicated that voters relied significantly on heuristics or shortcuts emanating from the campaign and to a lesser extent on either media campaigns or rational knowledge. The evidence showed that just a few weeks after the referendum, many voters were unable to recall the reasons for their voting decision. An interesting result was that while there was underlying support for the reform with 74% of all voters in support of Oireachtas Inquiries in principle, it failed to pass. There was a very high level of ignorance of the issues where some 44% of voters could not give cogent reasons for why they voted ‘no’, underlining the common practice of ‘if you don’t know, vote no’.

So are there any lessons we can draw for Scottish Independence campaign? Scottish independence would likely be placed on the stable end of the Le Duc spectrum in that some voters could be expected to have an ideological predisposition on this question. Campaigns matter less at these types of referendums. However, they are by no means a foregone conclusion. We would expect that the number of undecided voters will be key and these voters may use shortcuts to make their decision. In other words the positions of the parties, of celebrities of unions and businesses and others will likely matter. In addition, the extent to which voters feel fully informed on the issues will also possibly be a determining factor. It may be instructive to look at another Irish referendum, on the introduction of divorce in the 1980s, during which voters’ opinions moved sharply during the campaign, even though the referendum question drew largely from the deep rooted conservative-liberal cleavage in Irish politics (Darcy and Laver 1990). The Scottish campaign might thus still conceivably see some shifts in opinion.

Jane Suiter and Theresa Reidy are the authors of "It's the Campaign Learning Stupid: An Examination of a Volatile Irish Referendum" in Parliamentary Affairs. Dr. Jane Suiter is a political scientist in the School of Communications at Dublin City University. Her research is in political communications and in deliberative and participative democracy. Dr Theresa Reidy is a lecturer in the Department of Government at University College Cork, where she teaches Irish politics, political economy and public finance. Her research interests lie in the areas of public finance and electoral behaviour in Ireland.