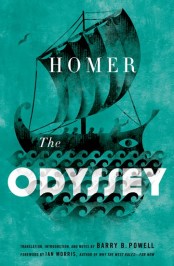 Odysseus--soldier, sailor, trickster, and everyman--is one of the most recognizable characters in world literature. His arduous, ten-year journey home after the Trojan War, the subject of Homer's Odyssey, is the most accessible tale to survive from ancient Greece, and its impact is still felt today across many different cultures.

Homer’s epic poem The Odyssey is a classic adventure filled with shipwrecks, feuds, obstacles, mythical creatures, and divine interventions. But how to visualize the thrilling voyage?

The map below traces Odysseus’s travel as recounted to the Phaeacians near the end of his wandering across the Mediterranean. Odysseus’s ten-year trek began in Asia Minor at the fallen city of Troy (the green marker) following the end of the Trojan War. His ultimate destination: his home in Ithaca (the red marker). Click the markers for information on each step of his journey. It is important to note that the 14 locations plotted on this map have been widely debated by both ancient and modern scholars.

Barry Powell, translator of a new edition of The Odyssey, asserts that the currently agreed upon location of the Island of the Sun (#11) is in fact modern-day Sicily. However, the characters in The Odyssey are in “never-never land,” and consequently, the locations plotted cannot be deemed entirely accurate.