April is Jazz Appreciation Month, honoring an original American art form. Across the United States and the world, jazz lovers are introducing people to the history and heritage of jazz as well as extraordinary contemporary acts. To celebrate, here are eight songs from renowned jazz singer and trumpeter Louis Armstrong‘s catalog, along with some lesser-known facts about the artist.

Heebie Jeebies (1926)
One of Armstrong’s first recordings as bandleader was a series of singles released under the name Louis Armstrong and his Hot Five, which were later regarded as a watershed moment in the history of jazz. “Heebie Jeebies” in particular gained fame, and historical importance, for its improvised “scat” chorus; according to legend, this off-the-cuff vocal part was the result of Armstrong dropping his sheet music during the recording.

Muggles (1928)
Long before J.K. Rowling transformed the word, “muggles” was a slang term for marijuana, a drug of which Armstrong was a lifelong enthusiast. This highly-esteemed composition by Armstrong was recorded with a group of the day’s foremost jazz talents, among them the legendary pianist Earl “Fatha” Hines. 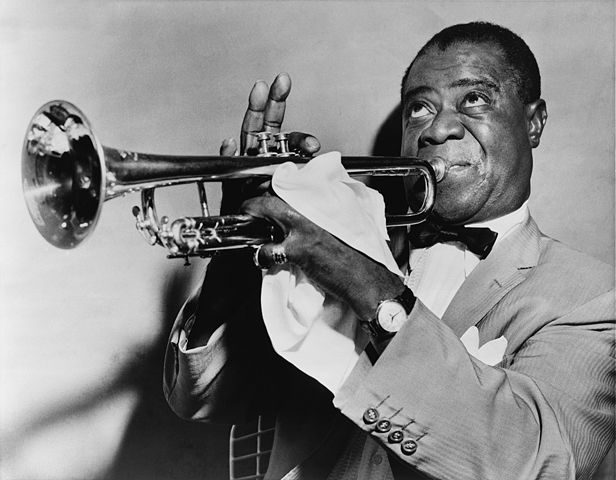 Ain’t Misbehavin’ (1929)
Although Armstrong had achieved renown among black listeners through his work in the ‘20s, it was this song, performed between acts during the Broadway musical Hot Chocolates, which arguably gained him his first crossover success. Originally written as an excuse to have Armstrong sing from the orchestra pit, its success led the producers to rewrite the script in order to bring him onstage, then send him to the studio to record the production’s hits.

Where The Blues Were Born In New Orleans (1947)
The film New Orleans featured Armstrong alongside Billie Holiday, in her only film role; the pair portrayed musicians who develop a romantic relationship. This track includes a lengthy section in which Armstrong introduces his ensemble, featured in the film, which was loaded with the day’s biggest names: Kid Ory, Zutty Singleton, Bud Scott, and more.

Mack the Knife (1955)
In the later decades of his career, Armstrong’s lip muscles no longer allowed him to perform the same kind of trumpet pyrotechnics he’d become known for earlier in his career. As a result, he began to rely more on pop vocal performances, such as this, one of his best-known songs of all time. Taken from The Threepenny Opera, Bertolt Brecht and Kurt Weill’s anticapitalist stage drama, “Mack” became a major pop success (although it did not achieve the same recognition as the white singer Bobby Darin’s #1 version, released four years later).

Hello, Dolly (1964)
Probably the biggest hit of Armstrong’s career, this song, taken from the eponymous musical, took the #1 spot on the pop charts from the Beatles during the height of Beatlemania.

What a Wonderful World (1967)
Perhaps surprisingly, this song — perhaps the tune most closely associated with Armstrong — was not a hit in America upon its release, selling only about 1000 copies. Over time, owing to its frequent use in films and numerous cover versions, the song would eclipse all others in Armstrong’s discography to become his signature recording, but not until long after his death in 1971.